The kids had their last dentist appointment in Nov/Dec in Minnesota. Where the dentists said it was time to make some orthodontist consults for Isaac. He has a very narrow top mouth which has caused major crowding. I didn't mess with seeing anyone in Minnesota but got three lined up to see before their school started to get an idea of who we would see. Read about recommendations through a mom's facebook group.

Here was one stop: 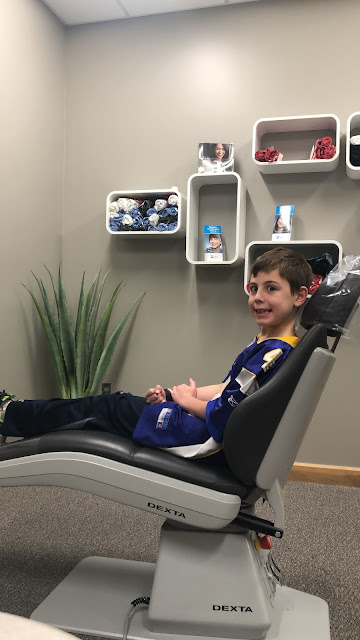 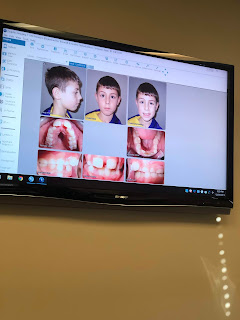 Isaac has always been a mouth breather... which has probably been the cause of his mouth malformation. Because he doesn't close his mouth his tongue hasn't sat in the space it should to allow his upper mouth to form around the tongue, thus causing to cave in and be smaller than it should. Now with his adult teeth there is no room. His dad had the same thing as a kid, but unfortunately didn't have a spacer placed like we will do and ended up having many adult teeth pulled.  We are hopeful a spacer will help us avoid any teeth being pulled.

Also the third consult pointed out how big his adenoids were. We knew this was an issue because in Kindergarten his teacher inquired about his nasally talk, we've had questions about if he had exercise induced asthma, and he is a loud snoring at night. All these things are from his large adenoids and the mouth thing is just the straw that broke the camel's back so we decided to just get it taken care of.

His dad, again had the same thing, but back in the day instead of removing them they did allergy shots... which didn't really work for him because it's not allergies it's enlarged adenoids. It was a quick and simple procedure. We had a consult with ENT, he said yes they are huge and there was fluid behind his ears so if the fluid was still there on the day of surgery they'd put in some tubes. 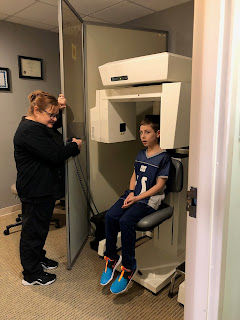 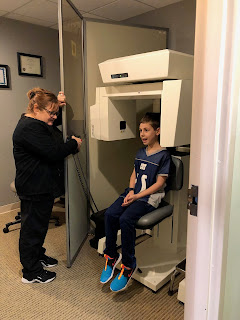 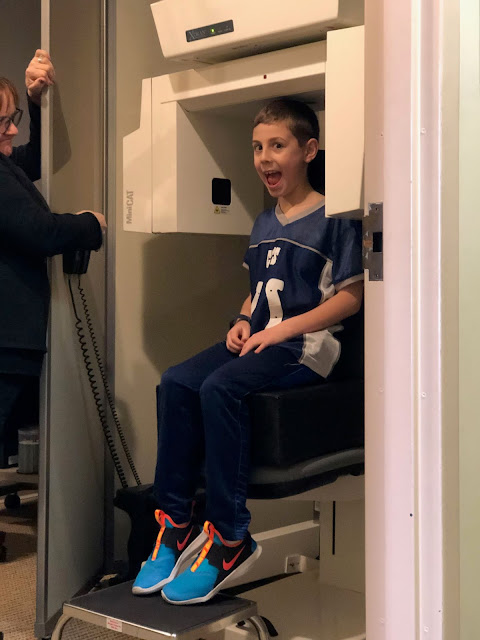 Surgery was set for February 26th. We had a 5:30 arrival time. It was a little stressful as Kyle was traveling out of time and my sitter fell through at the last minute. She had written down March instead of February so I was kinda fretting about how the girls were going to get to school. I had asked everyone I knew. Had a back up plan with a neighbor from BSF I could drop the girls off at 5:15am but that wasn't ideal... another babysitter was able to come when I realized I just needed to get the girls to school and she would be done by 8:45 am. So I took thomas with me. In the end I didn' tneed to because we were home and done by 8:30 and I took the girls to school myself.

Early Morning arrival, we were the first ones there. 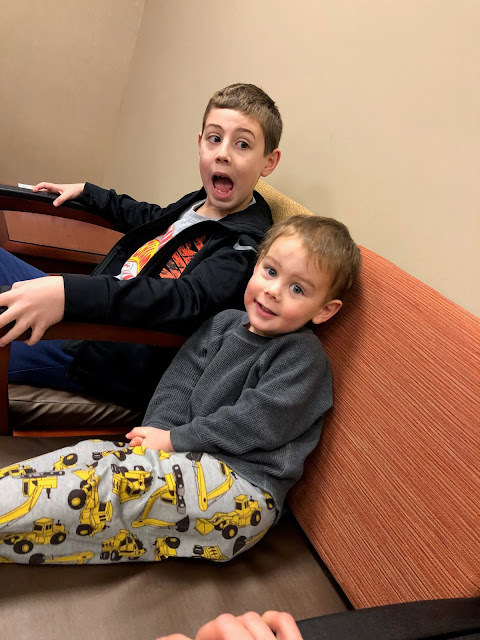 Went back into the pre-op area. They STILL USE paper charts! I couldn't believe it haha! 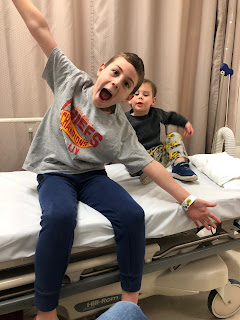 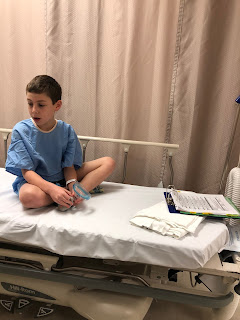 It was an adult surgery center but with some pediatric doctors. Given my Child Life background I requested a pediatric anesthesiologist. She was only there at certain times when the ENT MD was there so we went on that match up. 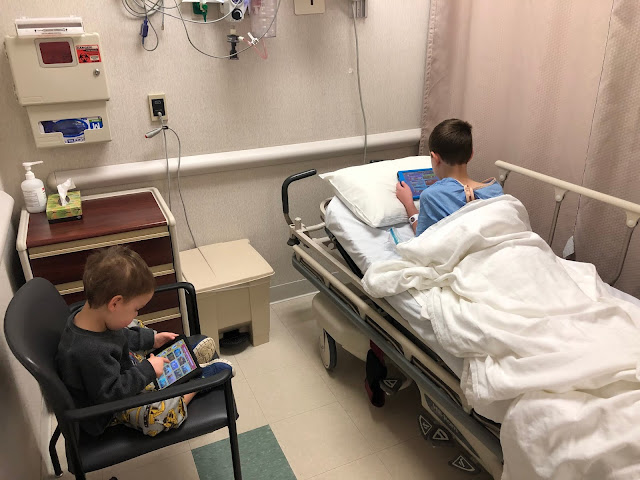 We met everyone and he was taken back to the OR. Thomas and I went out into the lobby and had some of our snacks/breakfast. Went back in to the sitting area and it was already time to chat with the MD, who was finished up already. It was about 10 more minutes before we got to see Isaac in Post-Op. 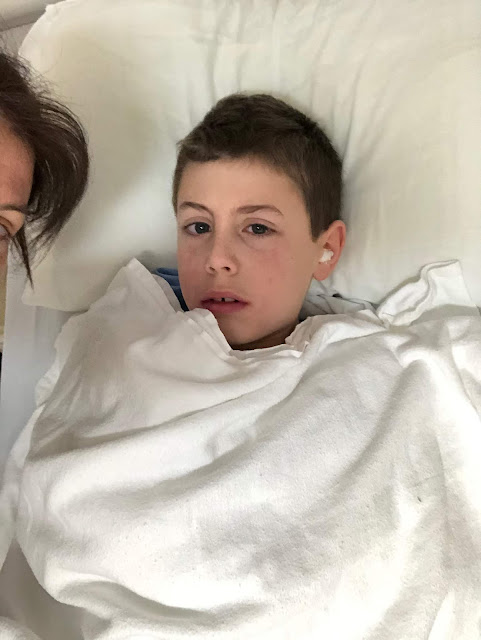 Turns out there was still fluid... but not normal fluid. It was thick goo from being in there so long. So he got tubes placed as well and can FINALLY hear and can FINALLY breath through his nose! Poor guy couldn't smell anything. So glad we got it taken care of before the whole coronavirus stuff.

Getting his PIV taken out and we were out the door about 8:15am. 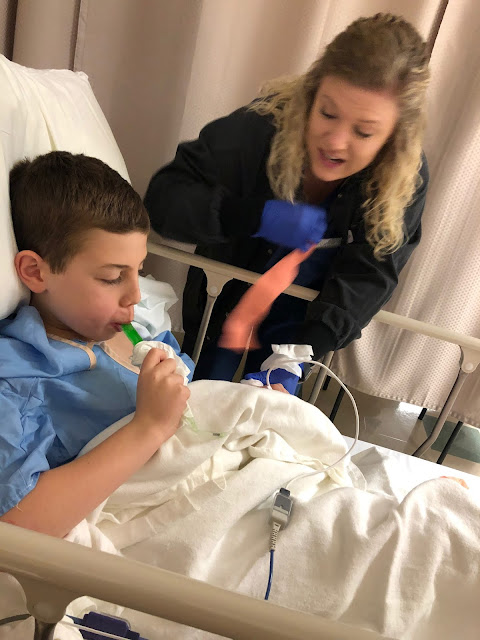 Recovery was good. He did great that day and I was worried about keeping him mellow for a good recovery. But about day 2 and 3 he was feeling yucky and was happy to rest up. He never needed his zofran, we did continue to alternate Tylenol and Ibuprofen. He also had to get drops in his ears twice a day for 7 days. The Tylenol tasted disgusting so by about day 4 we discontinued use of that and stuck with ibuprofen.

This was a couple days later we had a gift card to use at Freddy's. It's a popular place here in Wichita. I was expecting something like Steak & Shake... but when we walked in it was more like McDonald's, lol. I had to laugh cuz we are not fast food eaters. When ordering at the counter I asked the guy "So what's good here" He said "Everything" LOL.... which all taste the same cuz it's all fried in the same grease, lol. Isaac had Ice Cream for dinner. BTW Andy's Frozen Custard is better :-D 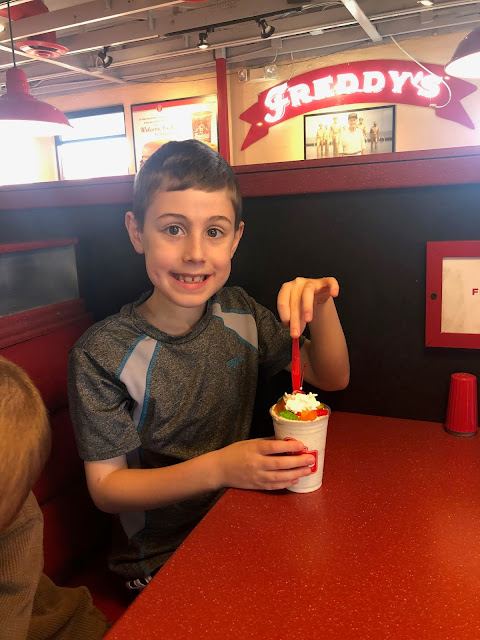