I forgot to share our excitement last Sunday. Isaac sat on the potty for the first time!!! I picked up this little potty seat a while ago to have on hand. Isaac isn't a regular pooper, so when the time comes every 3-4 days its usually an all day event. My thoughts are maybe if at one point he's poopin' we could get him to drop some in the potty. Since I got the chair months ago he really wanted nothing of it. Well last weekend when he was pushing and grunting I asked if he wanted to sit on the potty and he said YES! He let me put him up there and he sat there for about five minutes. We played on my phone, we read books, and even though nothin was dropped in, it was great that he was okay with sitting there. We will probably get a little potty so it's easier for him to sit on it himself, but for now just happy he showed some interest :-) 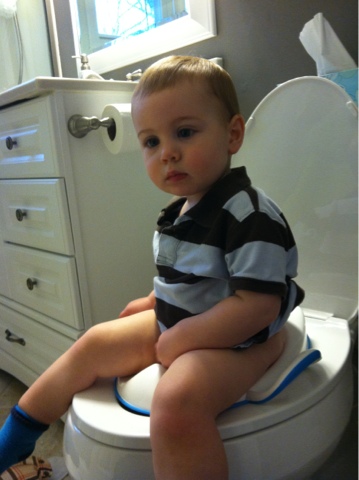 Yesterday Kyle got Isaac saying "ball" "mama" "dada" on command. Since he was doing so good, Kyle had him run through it a few times before we attempted to get video. Then I pulled out my phone and began recording... little stinker :-) He did pretty good, but he was really doing good before hand. He does say "mama" all the time, but wouldn't in this video.

And then today I had to capture him eating. He ate four pieces of french toast for breakfast. Then insisted on snack 2 hours later. And then had two courses for lunch!!! He out eats Kyle and I both! Not sure what we are going to do when he is a teenager!! He also shows off his baby sign skills in this video: