Back to work & and finally the snow came

Well my first day back to work was last Saturday (feb 25th). Honestly I am excited to back to work, I love my job and I'm glad to be around adults again!! Although I miss my widdy baby back home, working part-time is the perfect mix because I'm not away from him too long. And the fact that my schedule is evenings and weekends when I do work is perfect because he is mainly home with his daddy while I'm away.

So far pumping at work is going good. He takes the bottle well and so far I've been able to pump more than he's eating which is great to because my supply seems to be doing well. I'm not really a fan of pumping... kinda a pain in the arse, but he is totally worth it and I just have to remind myself I'm giving him the best gift possible BREAST MILK or BEST MILK :-P heehee

In other news winter has FINALLY decided to show up! It's only March for crying out loud! lol We got a few inches overnight, maybe four... I know up north got a LOT more snow than we did. I was able to get the front shovelled while Isaac napped this morning and boy was it HEAVY snow! It was quite the work out I think I even broke a sweat. I've searched the internet but can't seem to find the official number of inches we got... I'm thinking 4"-6"
posted at 2/29/2012 06:28:00 PM No comments:

I downloaded some videos off of Kyle's phone. Here are the links:

What I love about my two-and-a-half-month old

Well everything! But to name a few:

-he's so fun to squeeze and snuggle! He has just the right amount of fat on him

- he smiles SOOO big when I walk into the room

-he drools SO much, while at the same time his spitting up hasn't really improved

-he loves looking at his feet

-he sings with me and coos and goos it's so cute!!

- I love kissing his cubby cheeks

-he's a great sleeper an so easy going

-he's starting to want to be on the move but he's not yet and I'm glad about that. I'll lay him down in front of his mirror and he finds a way to scoot right up next to it Changing his diaper tonight was exciting as he had his hips tilted way over (but no back to front rolling yet)

-and finally I bought this hat for next year but it fits him great now and he's so cute in it I can't take it!!! :-) 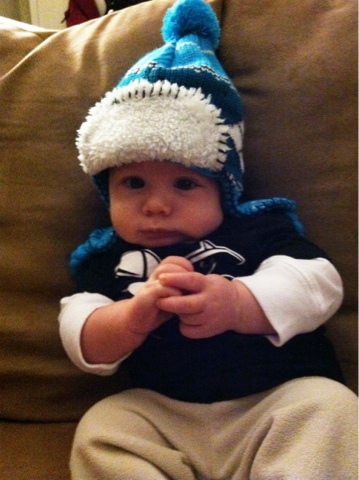 It really is amazing how fast babies change; that he continues to change and I know next week and the next will be different still.
In the past week he has moved his fists into his mouth and he grabs a hold of his bib more often. He's grabbed my fingers and pulled them into his mouth and instead of sucking he clamped down!!! We broke out the teething rings and toys but he still has yet to show much interest in those. He's also already quite the drooler!!! Luckily he already has bibs on for the spit up so looks like we'll continue the bibs for the drool :-)

He has also recently preferred to fall asleep on me facing out. The week before I could put him on my chest belly to belly and he'd go out like a light. Then last week he wanted to look around while dozing off.

He also slept a record 7 hrs on Friday night!!! It was great for him to sleep so long but it sure left me feeling uncomfortable. He might have slept a little longer but I needed him to eat and empty one of my boobs, then I got up and went downstairs to pump the other side. It kinda threw our whole day off as far as me feeling engorged. So many adjustments to face.

And other news we found a nanny!!! We posted an ad on care.com a few weeks ago and actually had 15 or so interested. We did two interviews this weekend after weeding through the email candidates. And settled on a great gal named Emily. She'll watch Isaac 2-3 days a week between when I leave for work at 2:30 and when Kyle gets home about 5:30 or so. I go back to work in less than two weeks :-( I'm happy to return and get a part of me back, but it's also going to be hard leaving Isaac for any amount of time. Luckily it is really not that much time apart.

I can't think of any other changes off the top of my head, so I'll leave you with some funny faces from this morning. 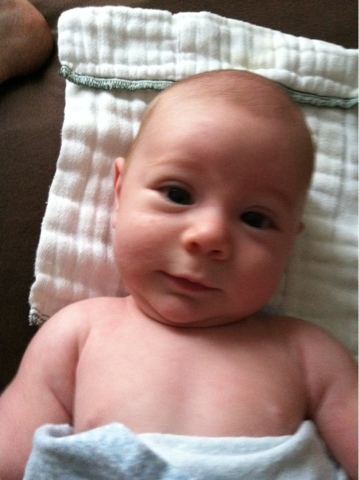 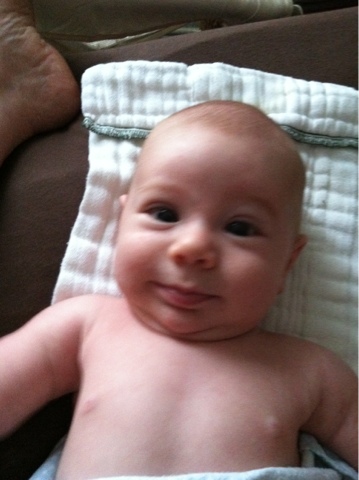 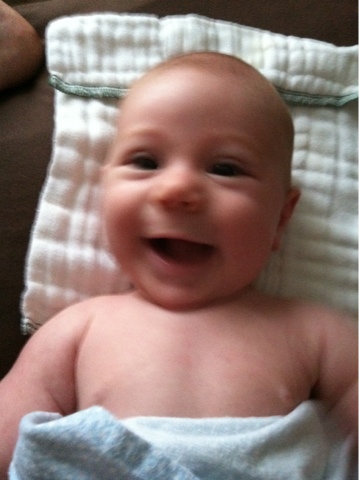 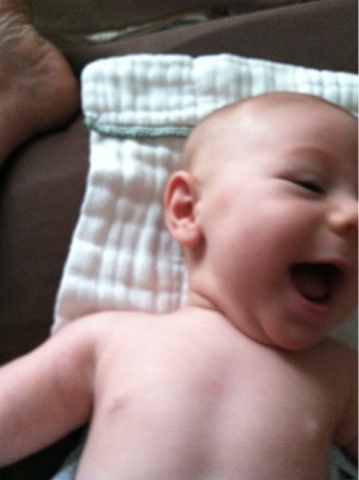 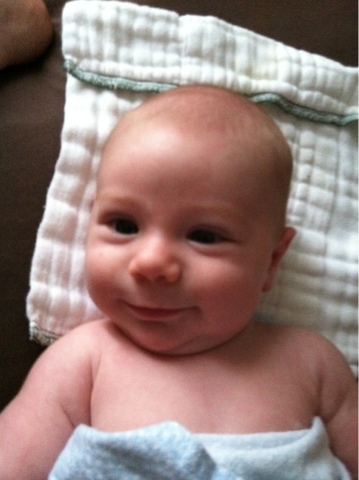 OH I did catch him leaning over to his left today, the start of the back to front roll. He didn't get any farther than in the picture but it's something new he hasn't done before!! 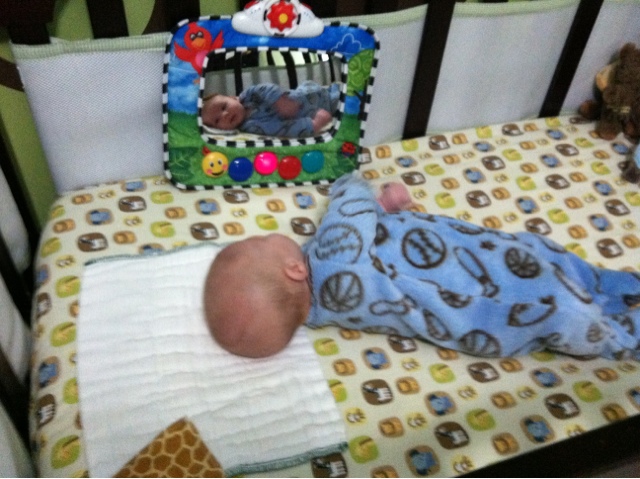 He had his first trip to Mall of America. We took our new stroller and walked around... and surprisingly learned a whole new side of mall going... the elevator. Since we are in the stroller gang now, we had to wait on elevators and crowd in with all the other strollers. Toward the end we ended up just taking the escalator down, but still needed to get on the elevator to go up.
He was suppose to have his 2 month check up Monday, but our doctor was ill so we had to reschedule for Wednesday. He measured 24 3/4 inches for length, 13 pounds 9 ounces and his head measured 16 1/8" around. He's growing very proportionately the doctor said and it seems that he is long!! He is 90% for weight and 98% for height.
He also got his first round of immunization. I have been doing lots of reading and pondering on the hot topic of immunizations and it's our decision to space them out and give his little body time to adjust to each one. I just don't see the need to cram them all in, in just a few short years. So instead of doing the SIX they recommend at two months, we only did TWO. The Diphtheria, Tetanus & Pertussis (DTaP - which is one shot) and the pneumococcal vaccine. He actually did surprisingly well. He didn't even cry at the first injection, and the lab tech said the 2nd one would burn a little, he did feel the second but only cried for less than a minute. It was his feeding time so I was waiting to feed him til he got the shots, which helped him feel better being able to nurse immediately after. Now let's just pray he doesn't have a reaction to either of those. The four that we declined at this time were: Hep B (which we decined at birth), Polio, Rotavirus, and Hib. We will do the Polio and Hib at the 9 month mark after the boosters for the first two are completed.
And just for fun, here are some of his fun faces: Harpo is adjusting well to his new little buddy. Although he is constantly seeking attention from Kyle and I, he is managing quite well. Last night I even let him ride with Isaac and I to Walgreens. he was ECSTATIC!
One of Harpo's newest favorites is cleaning up any spit up Isaac leaves behind, yes this is gross I know! And they have been taking a few naps together too And even when Harpo gets some play time in, he doesn't last very long, lol: Isaac got to see his first Superbowl. We went over to a friends for a little party. Isaac did very well of course, he's getting pretty familiar with this friends house as we were just there a few days before.
Luckily as we were getting him dressed and almost out the door I remembered his football hat I made him! I couldn't forget that!!