It was getting to be that time, he was beginning to develop quite the mullet, and since his locks weren't curly (he has inherited my straight hair I'm afraid) I didn't feel the need to push off a haircut any longer. So I made an appointment last week for today at 4:00 so Kyle could make it.

This morning we spent a little time combing his hair and talking about getting a hair cut. He enjoyed that. Then we arrived a little early so he had enough time to warm up to the place. Here are some of the before shots. Next it was his turn. He thought it was pretty fun at first He was checking out the TV that was playing Sesame Street Then he started to get a concerned look on his face He had a minor melt down when he wanted to get up and realized he couldn't do as he wished. So it was time to pull out the Child Life skills and let distraction do it's thang. He was immediately calmed as messing with Mommy's iPhone was a special occurrence and he didn't want to pass this up. That is also a shot of the 'after haircut'.

We got a cute little envelope that held his locks Now he looks like a big boy, even more. My baby is growing up!

So I've somewhat been obsessed with cleaning with baking soda lately. It started with the sink... well okay it started with Pinterest. Looking at all the fun ways of getting things clean: soaking paper towels in vinegar then wrapping around the base of faucet fixtures then washing with a brush and baking soda, soaking shower heads in vinegar to rid the hard water deposits, etc., etc. The other day I was cleaning the sink and thought "I need to pick up some more comet" then the light bulb turned on, I'll just try some baking soda. Viola! Super white sink and no harsh chemicals!

So another thing I saw on pinterest was cleaning those vent filters above the stove. I gave it a whirl and wow did it work. Boiling water, add some baking soda (watch out it fizzes, which is why I added the baking soda before it started boiling) then let it do it's dirty work. The water was pretty sludgy afterwards so I threw the water outside in some rocks, then the stock pot cleaned up nicely with some dish soap. And my vent filters are sparkling clean now!!! 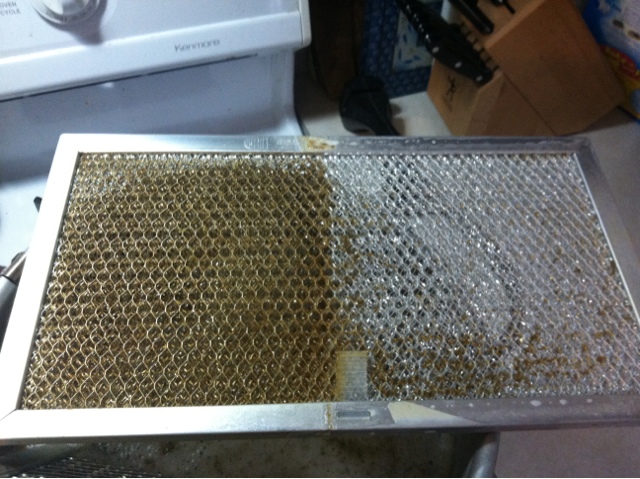 I was debating on whether or not to continue our monthly photos... but I figured why not, might as well do it while I have the time instead of looking back and wishing I had. And besides it's become a habit now :-) It's fun to capture the many faces of Isaac, he is quite the ham! New this month - testing limits, down to one nap, ranging from 40 minutes to 90 minutes. Kinda wish he was a long napper, but maybe I'll pray for that with our next kiddo. He's a great little helper! Helps us unload the dishwasher, throw clothes down the laundry chute, and he puts away his toys!! He is obsessed with his toothbrush(es), although still sitting at 6 teeth (since September) I think he likes chewing on his toothbrush to soothe his molars that will someday come in. We have been doing a lot of animal sounds, I caught a little "moo" out of him yesterday, and today he copied me when I was making an owl sound "Hoo!Hoo!" His favorite part of the day, hands down, is wrestling with dad! He is 100% boy, we were at baby story time today and while we were reading the other two books, he couldn't put down the digger book. He is still a great eater, although he has been turning his nose up at eggs lately. So this morning he helped me make some banana pancakes, he approved! And here he was lounging in the basement with us the other day. He loves the remote, he could push buttons (literally - not yet to the point of pushing my buttons, thankfully) all day! And here is the stocking I am working on cross stitching. I wasn't able to start on it until after my class was finished Dec 17th (which I got an A in by the way!!). So any chance of getting it finished before Christmas was out the window and I was okay with that. It'll be done by next year. I have finished all the small sections and now just have the big blue area to finish and the white face of the snowman. Then the detailing and assembly!