August 24th I raced in my second triathlon. This one was out in Maple Grove which is about 20-30 minutes away. I had picked up my packet on Friday while the girls were at their theater camp and had to rush back to Hopkins to make it in time for their performance. This is what transition looked like Friday afternoon: 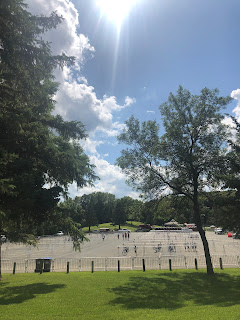 Instead of day of body marking they just gave us arm tattoos with our numbers on it. I got those applied the night before so I wouldn't have to worry about it the morning of. 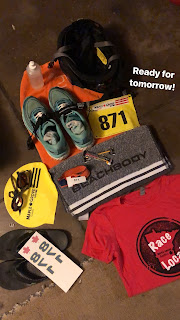 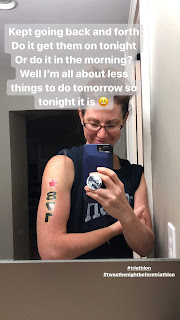 Had to get up bright an early. 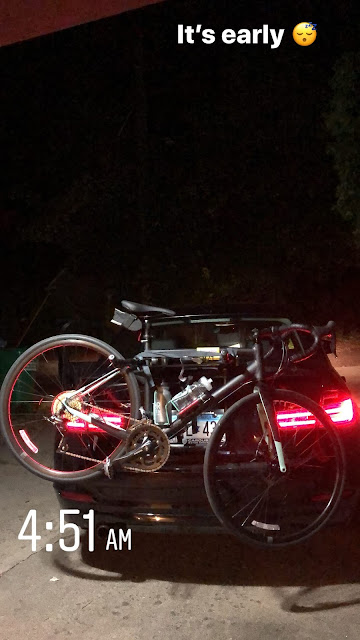 Transition opened at 5ish maybe.. I was WAY early, not before it opened but earlier than I needed to be there. Since there wasn't body marking and I can pretty much get my area set up quickly there was a lot of wait time. I did get to walk the course and mentally run it. It was a LONG way from the beach to my bike. This course had an Olympic distance, a sprint distance, and a super sprint distance. I choose the super sprint again because of the swim. Still getting comfortable in the water and wanted the shortest swim option. Only problem with that is I also had the shortest bike distance EVER! LOL it was only a 5 mile bike. So the swim was .25 miles and the run was a 5K. The difference in the sprint was a .5 mile swim, 13 mile bike, and a 5K. So the run was the same for both. Guess I'm easing my way up to a full sprint (which I'm doing this weekend).

It was still dark when I arrived. I didn't have alight on my bike (since then I've bought one) so it wasn't safe to ride it. Most all of us walked the few blocks to the transition parking lot. Got my bike and transition area set up and had some coffee. I liked how our spot was marked on the transition rack. A lot of times they are just first come but this was nice having a designated spot. I guess that's a lifetime thing, my neighbor said all lifetime races do that. 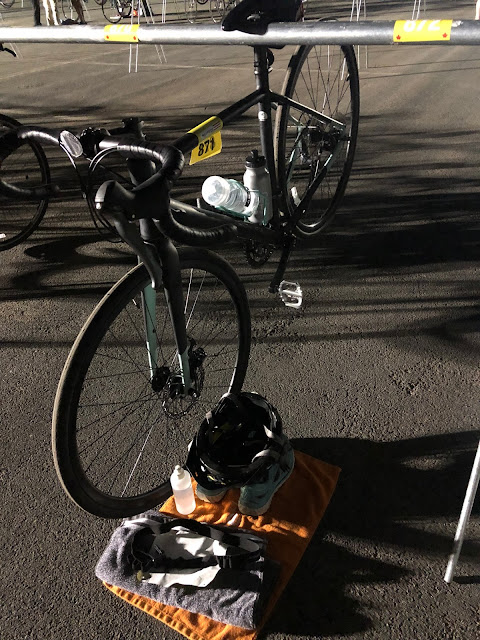 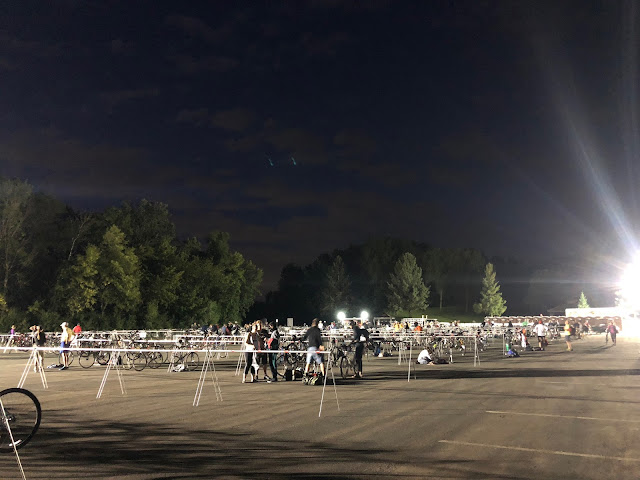 Sun is finally starting to come up. 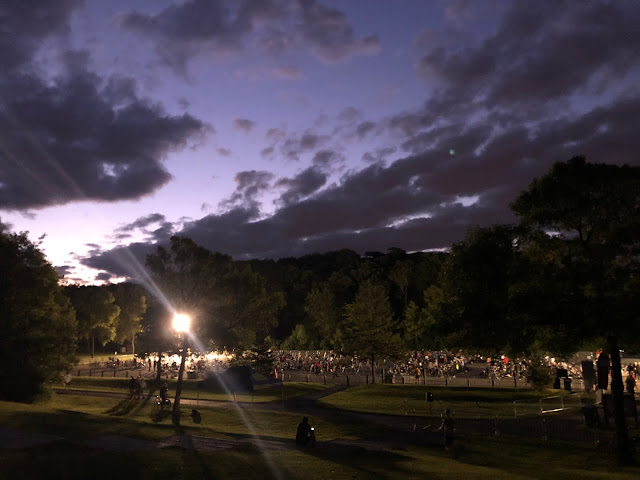 Gonna make it a habit to get a timing chip photo. 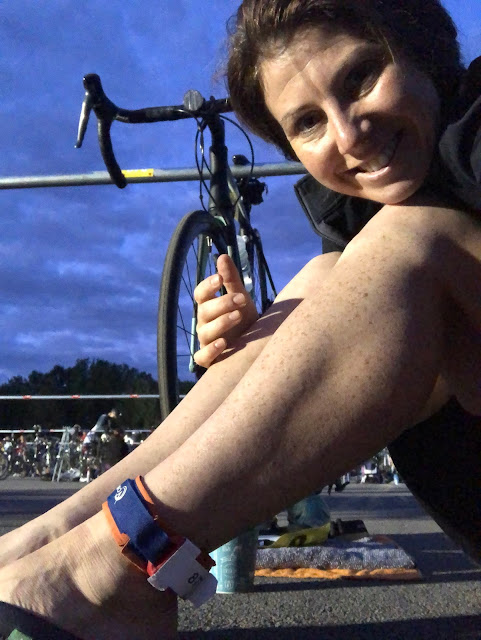 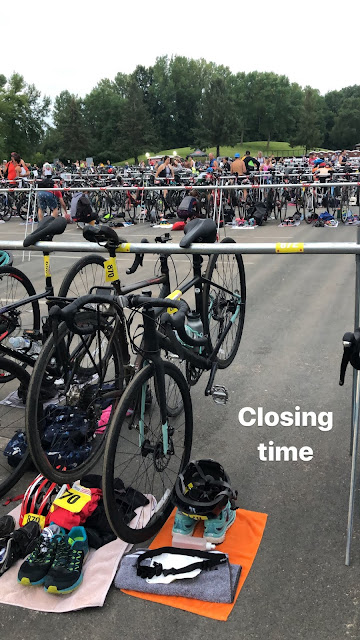 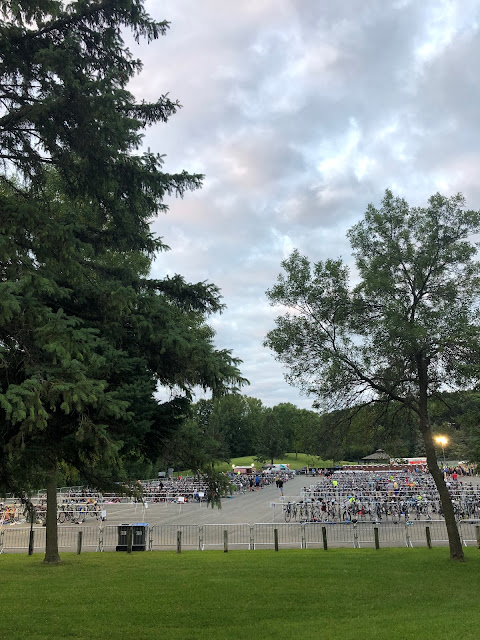 Like last time the super sprinters are the last to go so I had a lot of time to wait around and watch the others. Starting with Elite/Collegiate and Olympic distance, then sprint, then my small group. only 50 or so super sprinters.

My buoy marker to swim out around was the white unicorn! :-) 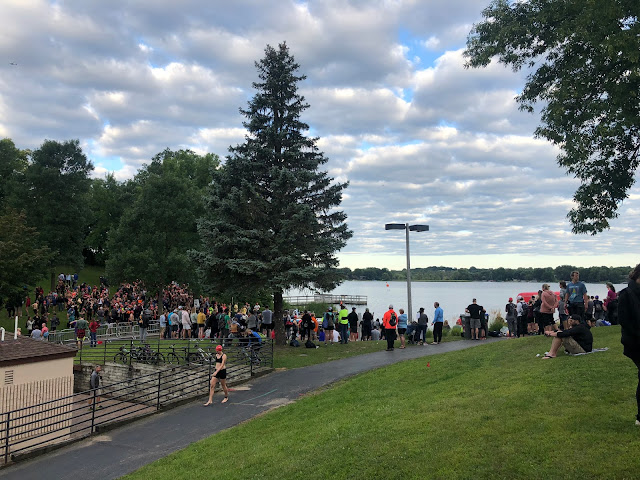 Kyle and the kids arrived shortly before I needed to go line up in my wave. Since I had a lot of time to wonder I had found some good viewing spots for them. 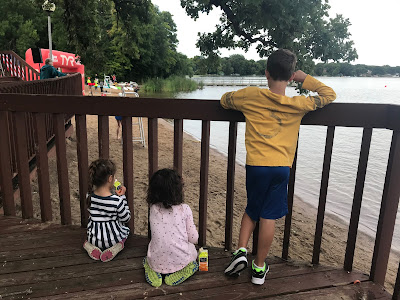 There weren't any pro photos from the YWCA tri; I'm glad I got 5 from this one. Here are three when I'm getting ready to go into the water: 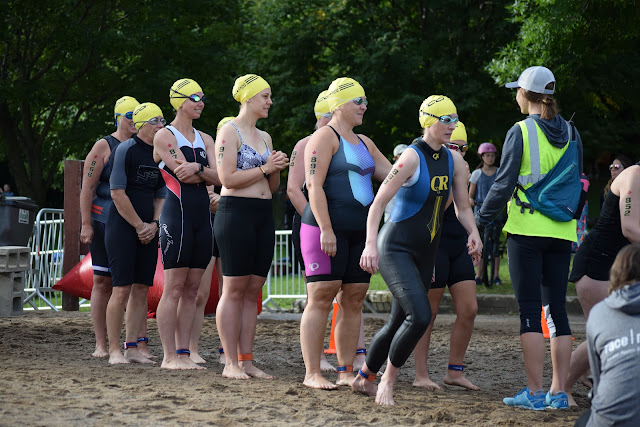 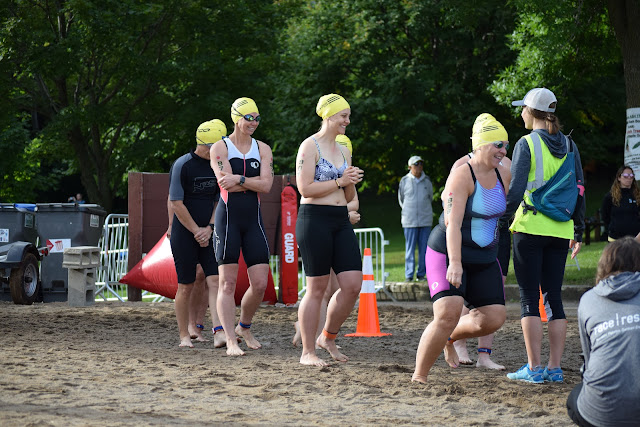 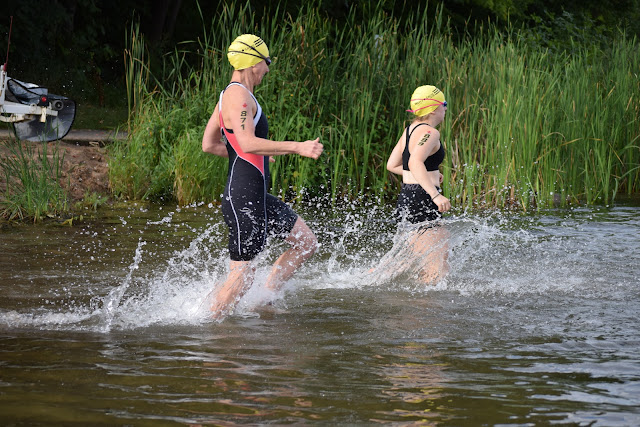 Kyle got these of my in transition heading out for my bike. He was quick to get from the water where they were cheering for me as I came out over to the edge of transition to see me get on my bike. I didn't even realize they were there. I did see them when I came back from the bike leg. 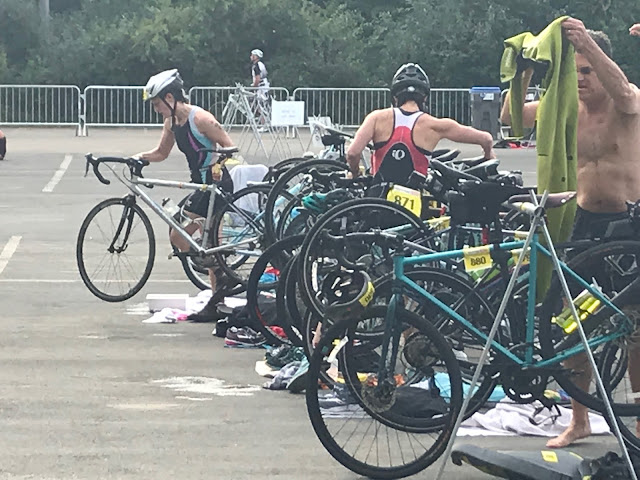 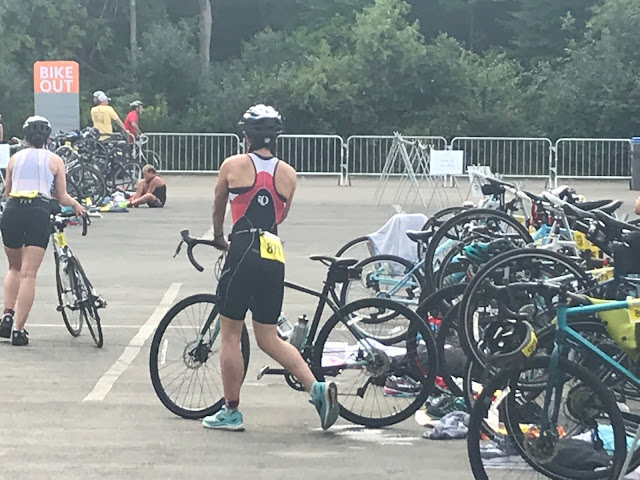 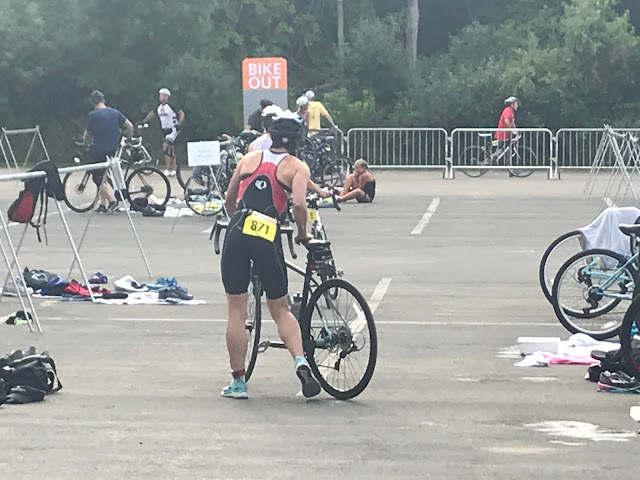 These two were 'pro' pics I got from the site. The 5K run felt great! My goal was to keep my pace under the 10 minute mark and I did!! Finished the 5K in 29 minutes, I'm happy with that. 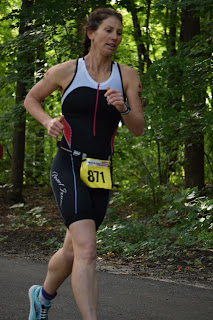 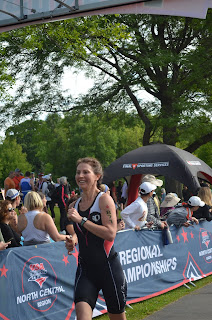 Kyle captured me talking with some friends after the finish. Post-food was bagel. Better than that 5K we ran where it was greasy pizza. But seriously after a race I'm not really that hungry, just know I need fuel. 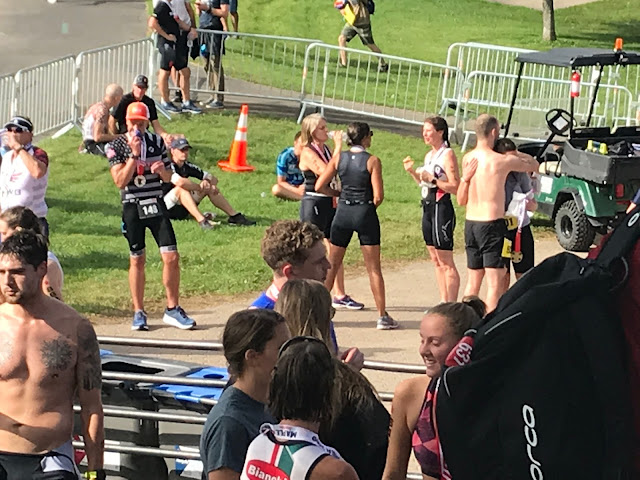 Number two in the books! This was a fun one. Much hillier terrain than I'm used to in the city, but still fun. The sky was beautiful the entire morning. 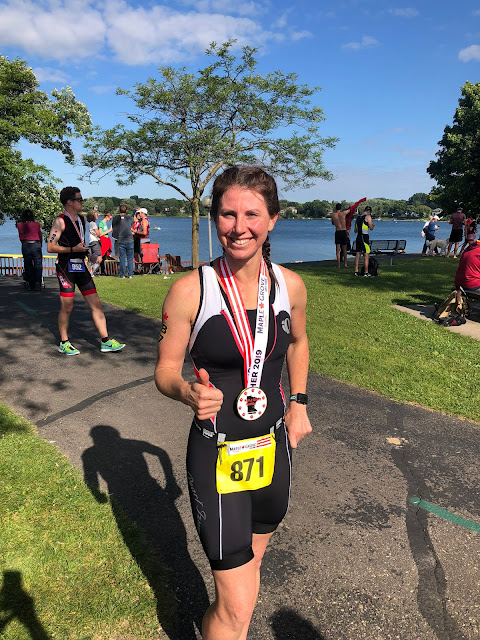 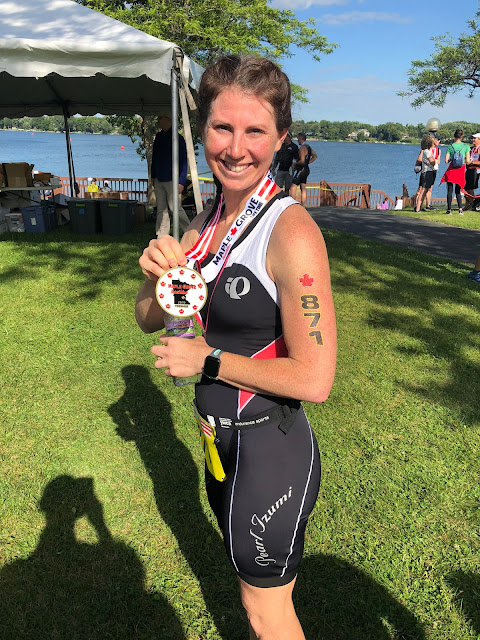 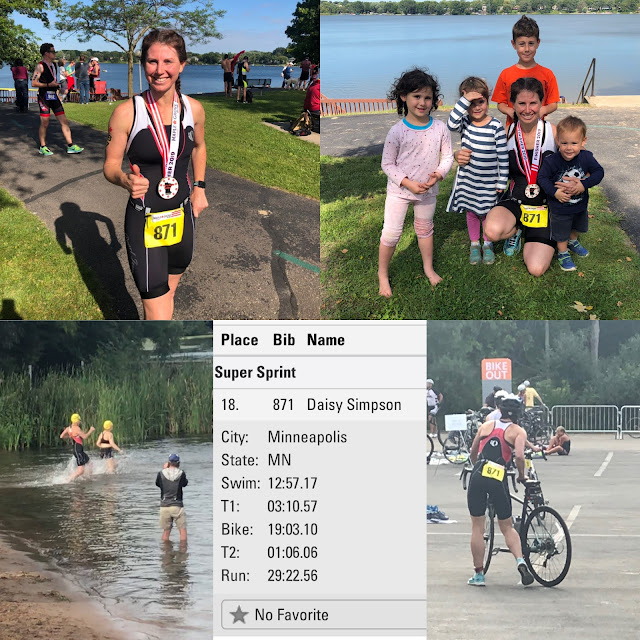 Susan is one of my MoM friends (Mothers of Multiples) She also ran the YWCA tri, so proud of her!! She did great! 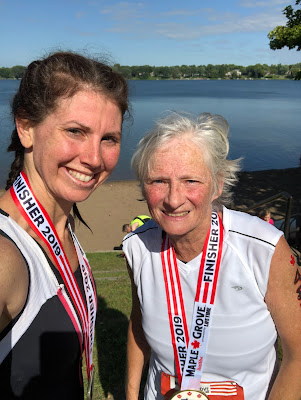 Attempt at a family photo. 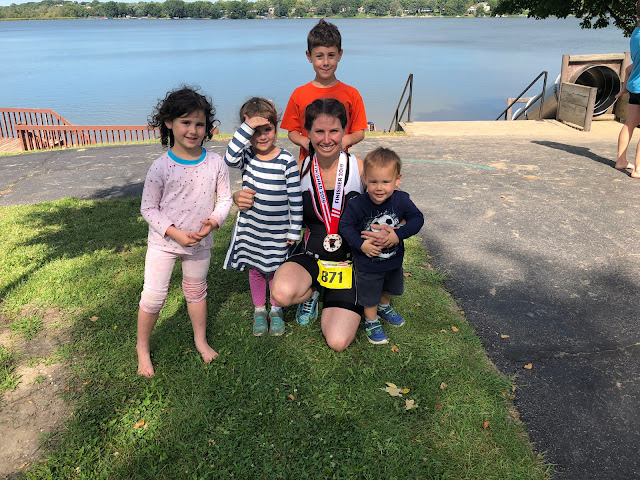 So what did I do when I finished this tri?? Well it took me a little longer but within the next week I signed up for 'One Last Tri' literally that's the name. It's the last outdoor tri of the season. It'll be a sprint distance with a shorter swim because of the colder weather, which is perfect! I got back to training but have been slacking a little this week. A little nervous since the bike is 13 miles and I've never ridden that long... I think this will be more of a fun one and not so much to do it as fast as possible. I might even attempt the swim in my wet suit.

Here are some pics from my morning workouts lately: soaking in these city views while I can <3 p=""> 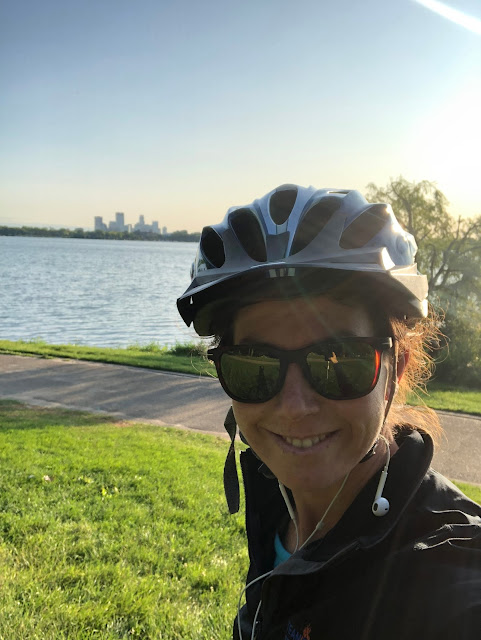 Followed by a cedar lake run. 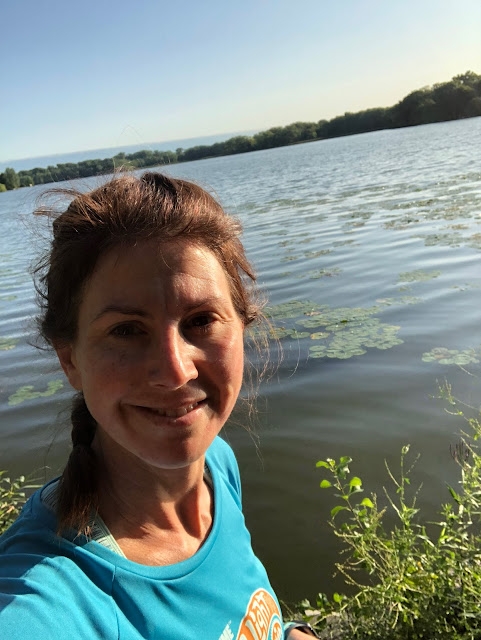 Email ThisBlogThis!Share to TwitterShare to FacebookShare to Pinterest
Tags: triathlon