(**so i have his month photos on my big camera, but if I wait til I get those off I'll never get this posted... so posting for now and will add the block photos with his age later :-P )

He loves food, eats more than Emma. Which works cuz when we order out we can just order three kids meals and him and Emma share. He’s picked up speed crawling, cruising on furniture and attempting to stand up with no assistance

😳. He experienced his first new state last week as well as the beach and ocean. He loved the sound of the waves. He has wicked separation anxiety and puts on quite the show when mom leaves the room. Even if we’re in the same room and mom rolls over on the chiropractor table he flips his lid. Mom must be in sight at ALL times. I hope this changes soon. Besides that he is a beaming ray of joy. He was sleeping so good but vacation put a spin on that. We hope to get a good sleep back soon. He is deeply loved by his siblings who constantly try to make him laugh. He loves the attention. 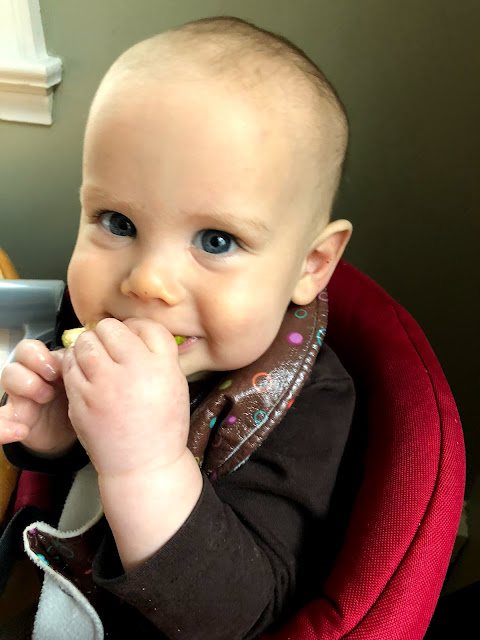 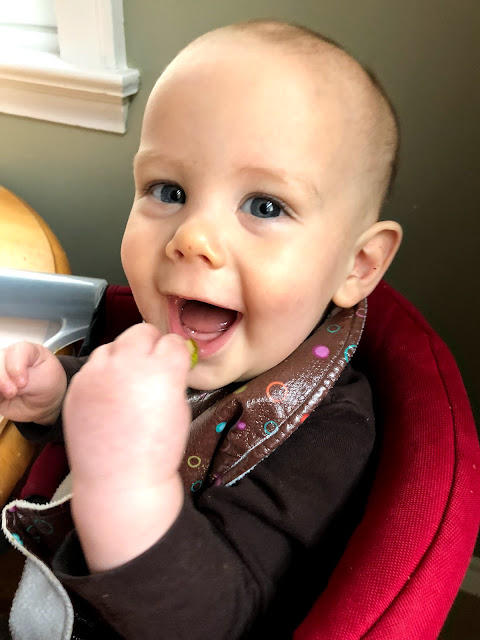 He loves giving kisses! And snuggles, so ticklish on his neck. He was just laughing so much this night. 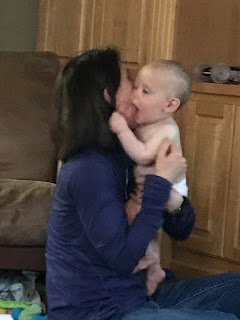 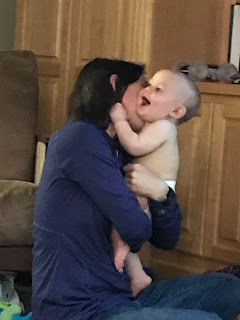 April 22nd! Finally warm enough to go for a walk! 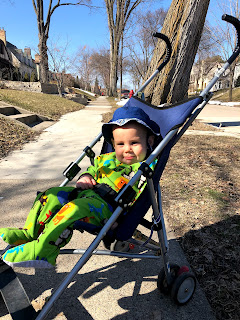 So we had an air fryer... for about a day before I decided it just wasn't our thing and returned it. Here Thomas is trying out the sweet potato fry, he liked it. Unfortunately we didn't really like the food made in the air fryer and it seemed like a bit of a waste for us. We normally eat healthy so fried food isn't our thing anyway. I tried many different veggies in it but it just dried it out. The kids wouldn't eat the fries from it. I think it would be great for meat, but we already have a convection oven and two nice outdoor grills so we didn't really need another appliance taking up space. I think we made the right choice in returning it ;-) 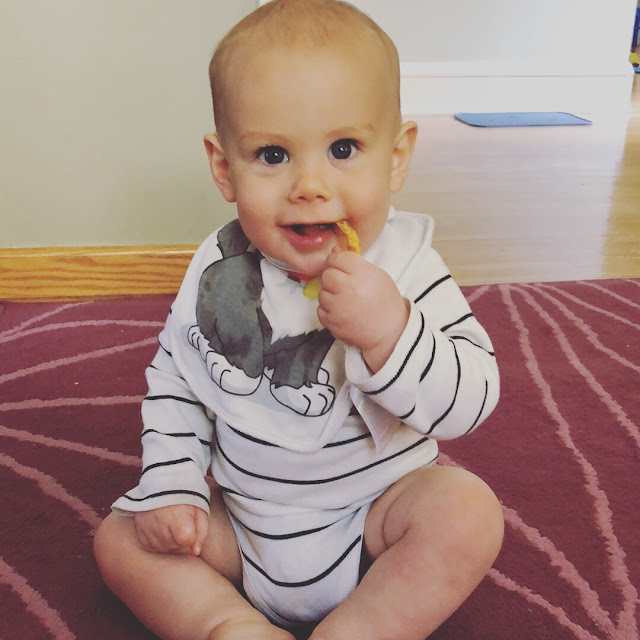 He LOVES being outside. The girls of course love the swing, we can close the gate on the deck and he just crawls and explores all over. 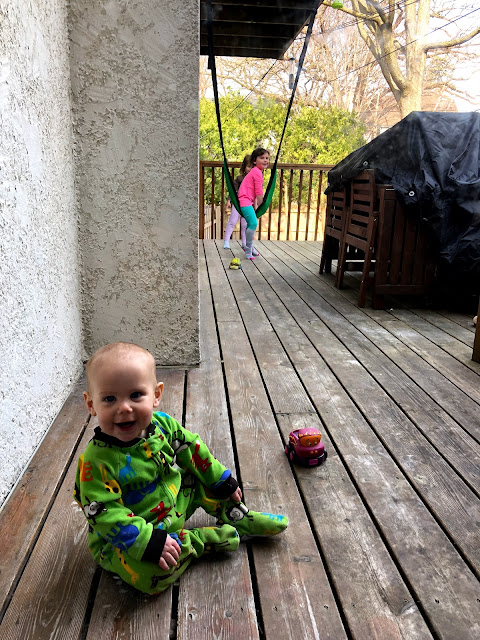 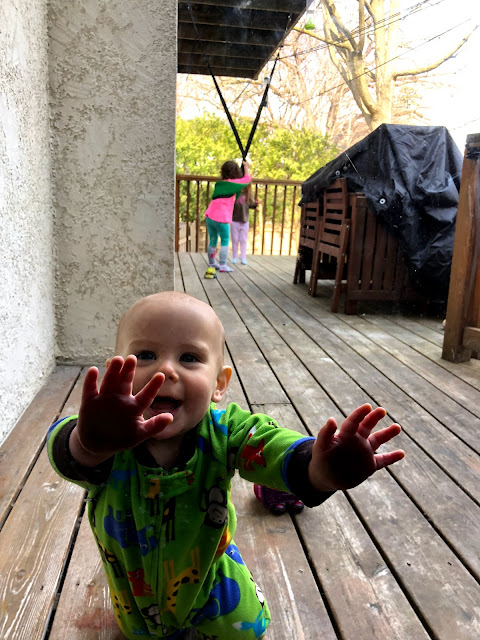 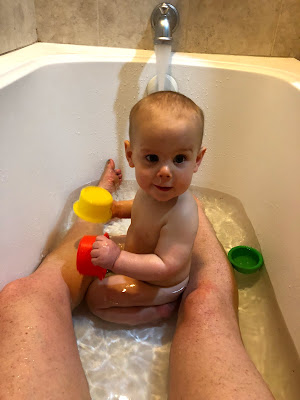 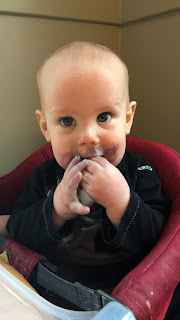 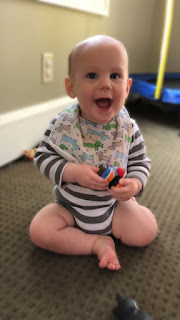 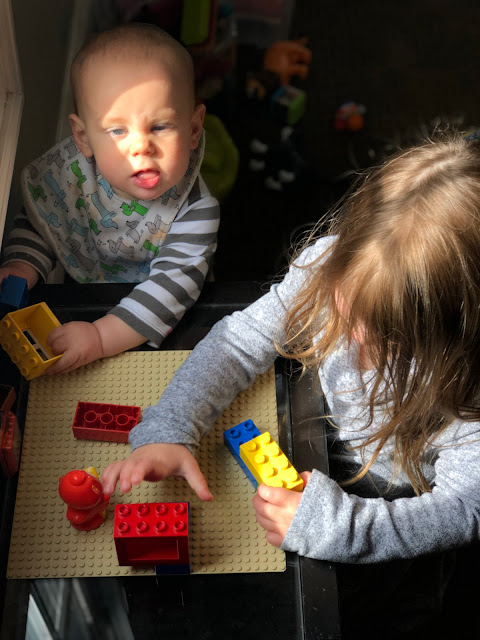 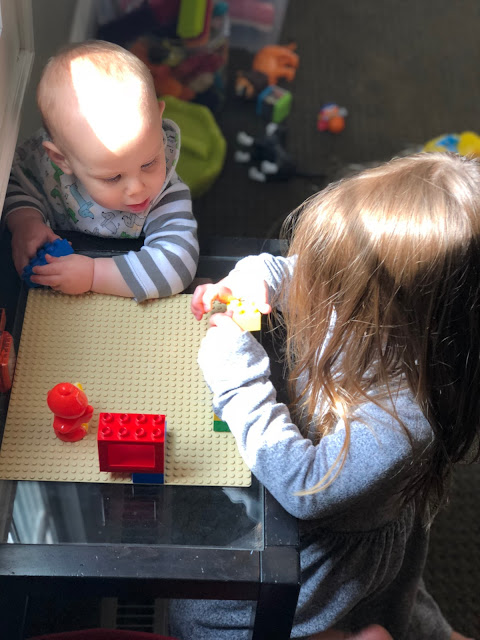 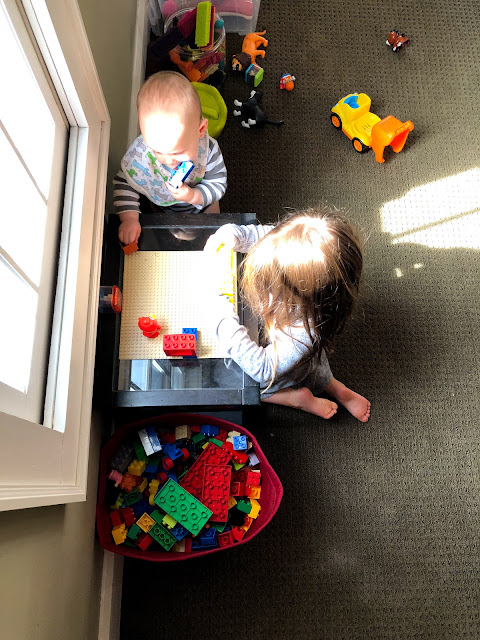 This sure is a precious stage. His slobbery kisses are less but I think that’s cuz he is so busy! He wants to explore everything and everywhere. He’s got a cute bear crawl and loves the stairs. He’s getting around pretty quickly which only means walking is near 😩 we are in denial about how well he is cruising and standing on his own. 😭 I want to bottle him up and stay in each stage a while longer. Still no teeth but that doesn’t stop him from loving food, like crazy loves everything. I made chicken meatballs last night and he devoured probably 5 or more. He is so chill and does so well waiting on everyone. He sat in his car seat and put himself to sleep during my dentist appointment yesterday. He is sleeping better than any of my other guys did at this point, however daytime naps are close to zilch. He loves being worn of course and also digs the stroller if it’s in motion. He likes to be included and gets an out pour of love from his siblings. If the other kids are playing nearby he is fine and content on his own. If he’s left in a room by himself he is exiting ASAP to find someone. Overall he’s so happy and such a joy! 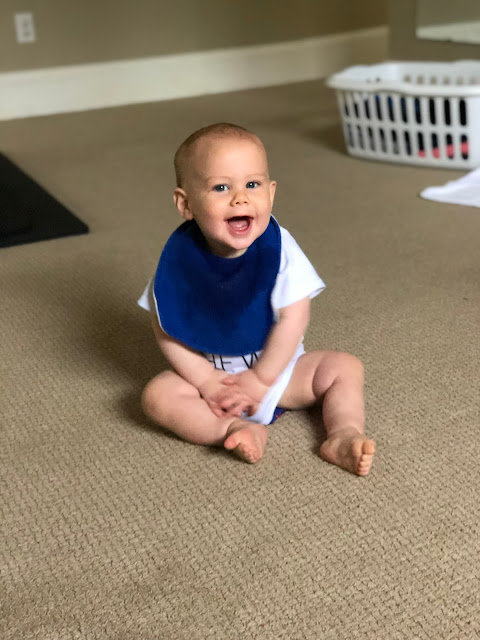 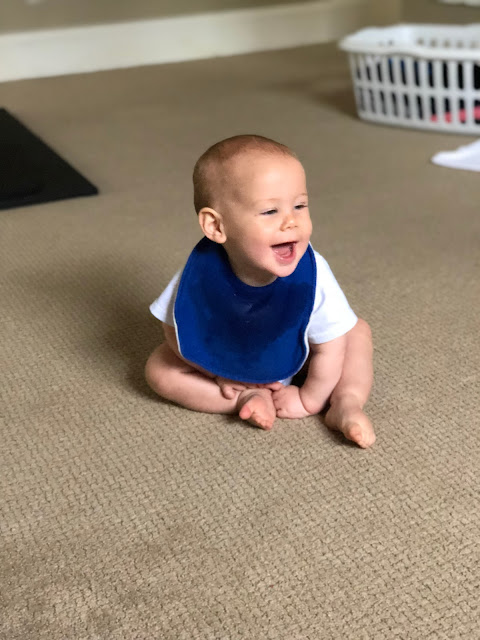 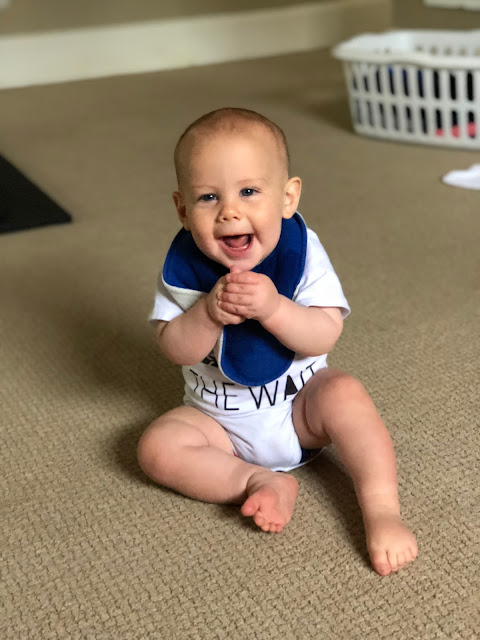 He got a TOOTH! First tooth popped up on the girls birthday: May 10th. 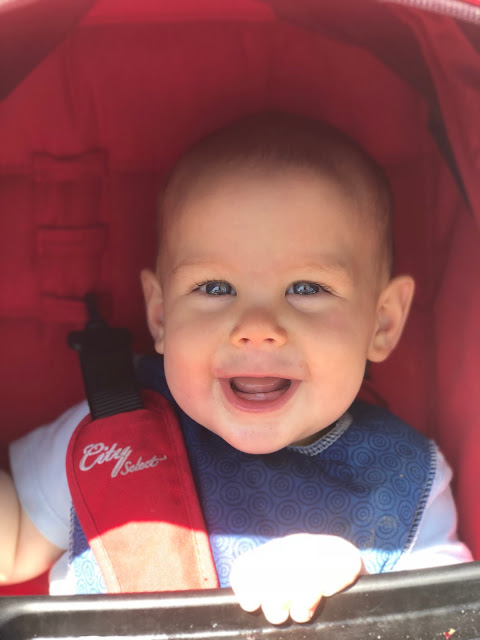 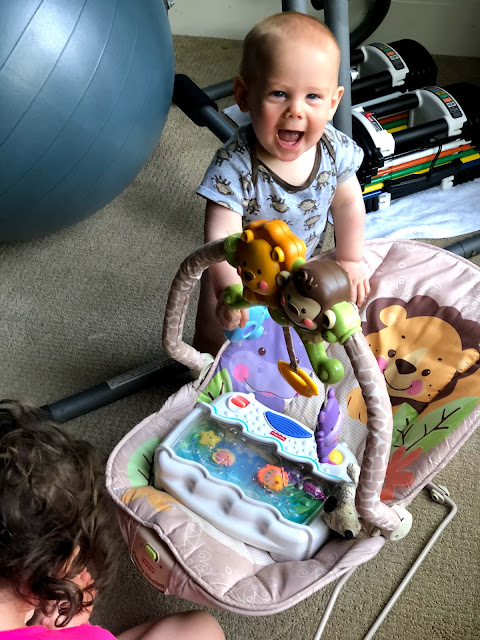 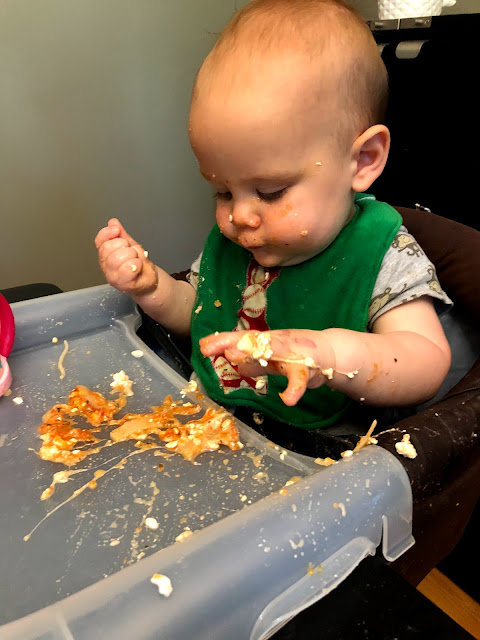 Snuggles in the swing: 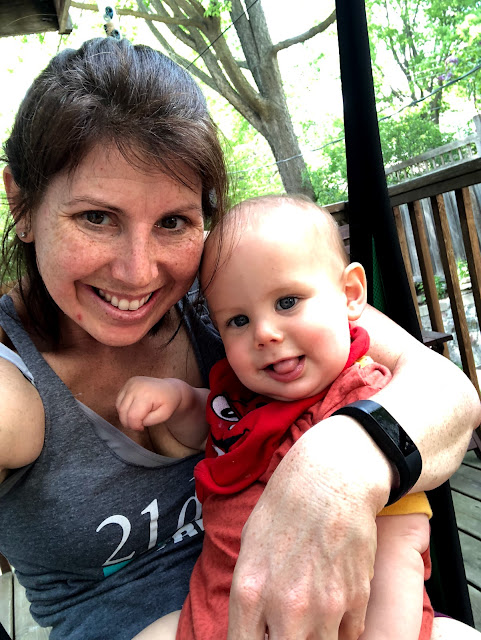 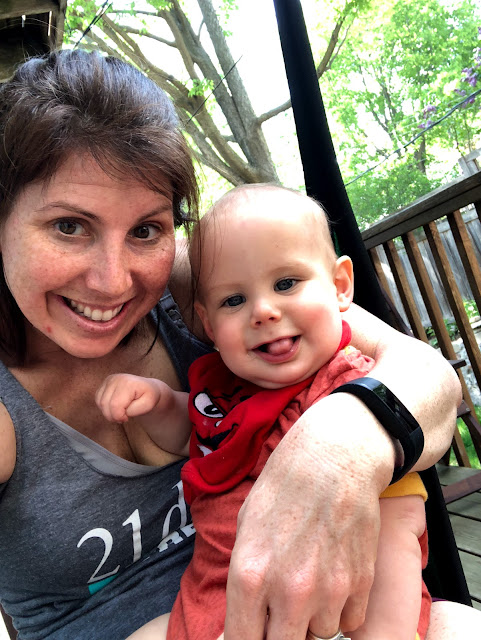 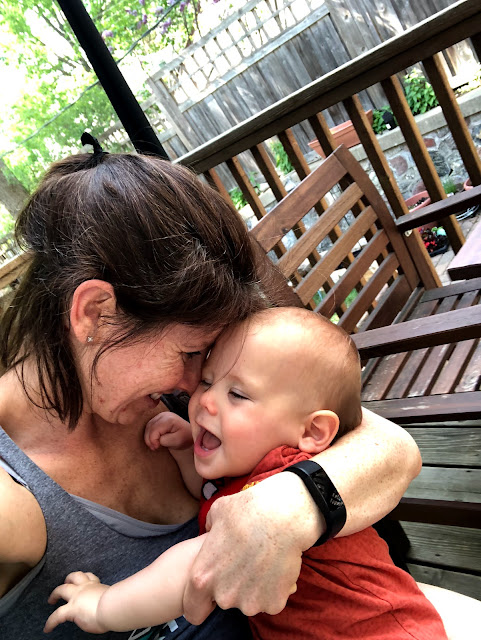 This one sure is a climber! Even buckled in he finds his way out! 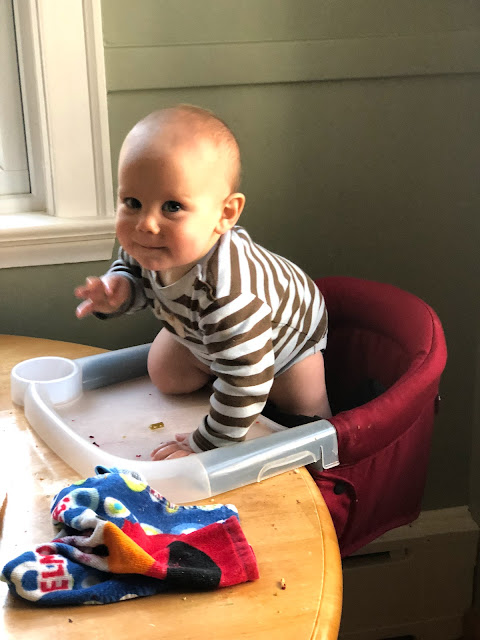 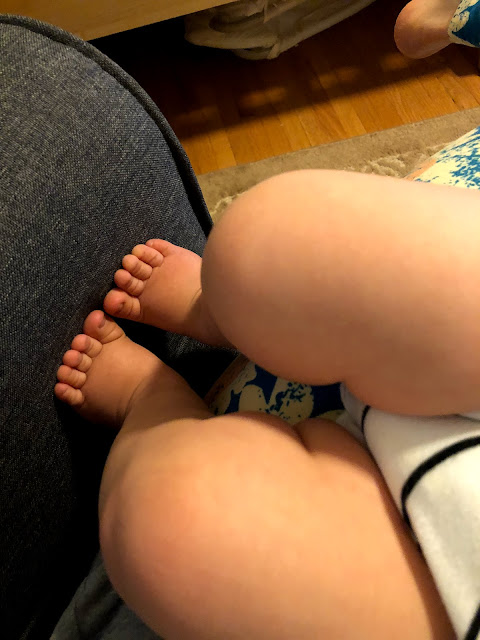 He had a fever this past week for a few days. Lil buddy, not sure what was up but he's doing better. 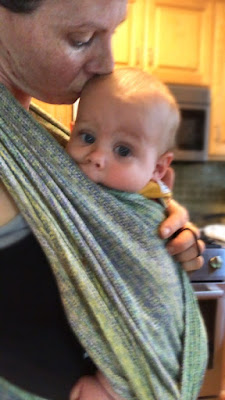 He is ready to be so big like his sisters! 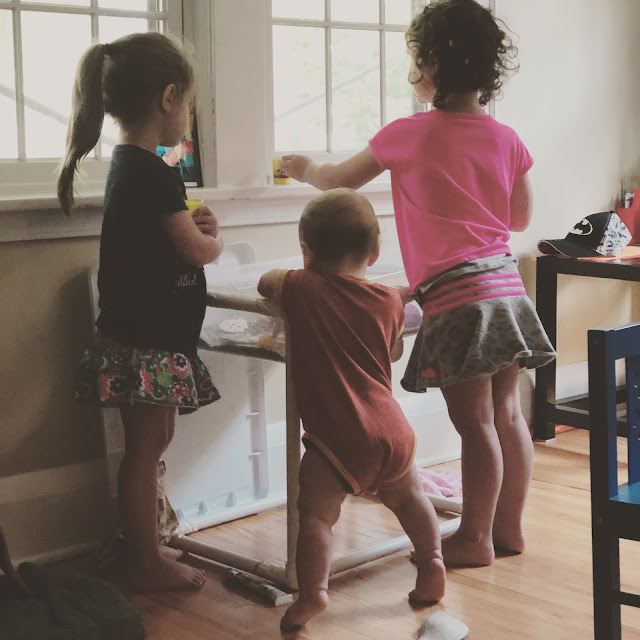 Sneaking in some game time with Isaac. Thomas loves being in his exasaucer outside, but when we need him to not destroy our game we use it to contain him :-) (the girls are way in the background playing in the tent) 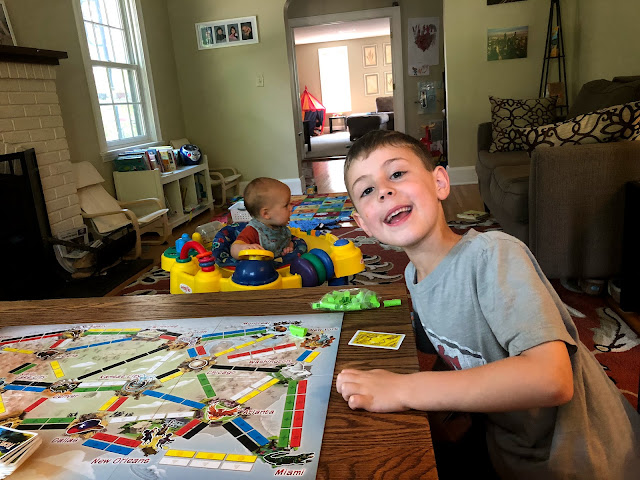 I love our Monday/Friday mornings together just the two of us while the girls are in preschool. This was yesterday. 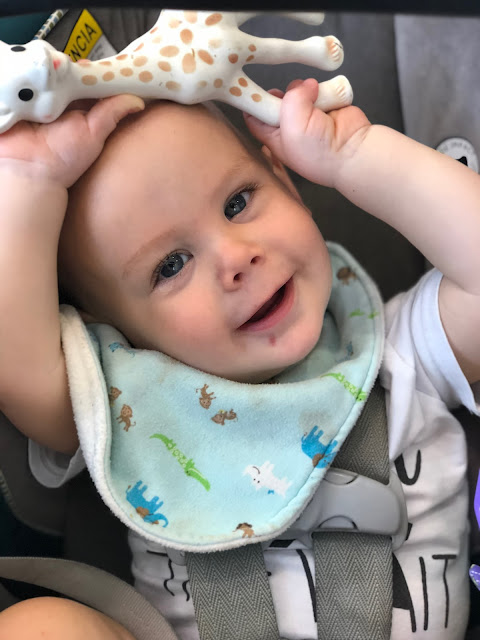