May 23rd or 24th Kyle and I were laying in bed looking for 5K races to sign up for this summer. That first night we looked and Kyle ended up signing up for a half marathon that takes place fourth of July. He had ran a half marathon the summer prior so he knew he could do it, just needed to get consistent with his morning runs. I had minimal dates I could sign up for a weekend race and didn't really find anything that spoke to me as far as causes or events that I wanted to sign up for. I came across the YWCA triathlon and a spark lit inside me. I kinda brushed it off and went to bed. The next day I thought about it more and more and more and I felt a pull that it was something I should really do. Even though I was scared and had no idea what I was getting myself into, it seemed fun, challenging, and something I wanted to do. So the next night I signed up and made it official. The YWCA has a sprint and a super sprint. I signed up for the super sprint since it is something I've never done before. Sure I'm in great shape, yes I bike and run... but swim!?! I haven't swam in forever and to do all three back to back, now that was totally out of my comfort zone. But they provide you with a 12 week training calendar and the event is 11 weeks away so I took that as perfect timing to get started in on the training.

Since we don't have a gym membership it meant that my swimming practice is going to need to take place in the lake at the end of our road. I talked Kyle into letting me get a wet suit so I can get started on swimming. The start of memorial day weekend I rode my bike over to our old neighborhood to check out a trisuit and a wet suit that a gal was selling. It was so great to 1) ride 2 miles on my bike as practice totally put me in my place because it was HARD (and totally flat, haha) 2) great to talk with this gal who is a triathlete she gave me some great pointers and info that will be helpful for this new endeavor. I ended up buying her trisuit (which is a suit you wear for the race day you can swim in it, it has a little bit of padding for the bike ride but not so much that you can still run in it). Her wet-suit did not fit me but was a good experience trying it on as she gave me pointers for how it works. She assured me the YWCA is the funnest beginner triathlon to sign up for. She said it is so great and welcoming for beginners and that there are people of all stages there. She said there would be women in bikes with baby seats on the back and baskets in the front. This made me feel good that I signed up for a good race to start. (or finish ha who knows if I'll ever do one again)

That bike ride proved to me that I needed a different bike. I had bought this bike maybe ten years ago, before kids, so maybe just 8 years ago. Anyway it still looked brand spankin' new but it was a cruiser bike and terribly slow. I knew this because when I got my cargo bike I was shocked at how much better it rode (also three times the price)
I listed this bike on craigslist and we had an offer the next day and a nice family came to buy it for the mom 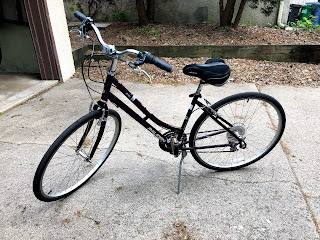 I did not want to buy a new bike until I sold that one and Kyle wanted me to get this other bike while it was on sale for memorial day weekend. So I went to test ride a new bike on Sunday. They didn't have the size I wanted so I went to another store on Monday. Problem was it was raining nonstop on Monday so I wasn't able to test ride it but sat on it in the store and picked out the right size. Brought it home in the rain and couldn't wait to ride it. 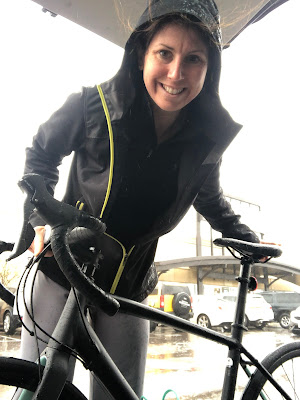 So that was Monday. I rode the bike around the block on Tuesday with Mary but hadn't had time to take it on an actual run. I think it rained Tuesday night so Wednesday I went for a run instead of a bike ride.

Wednesday May 29th my training officially began as I set out for my first run. It was actually my third run of the year but I haven't been consistent. Kyle and I decided to take turns with who leaves the house in the morning for our workouts. So on days he goes out for a run I'll stay in and do my beachbody workouts and the other days he stays in and does his beachbody workouts and I go for a run or bike. This was my amazing view on my Wednesday morning run.
1.82 miles
17:37 minutes
9'40" pace 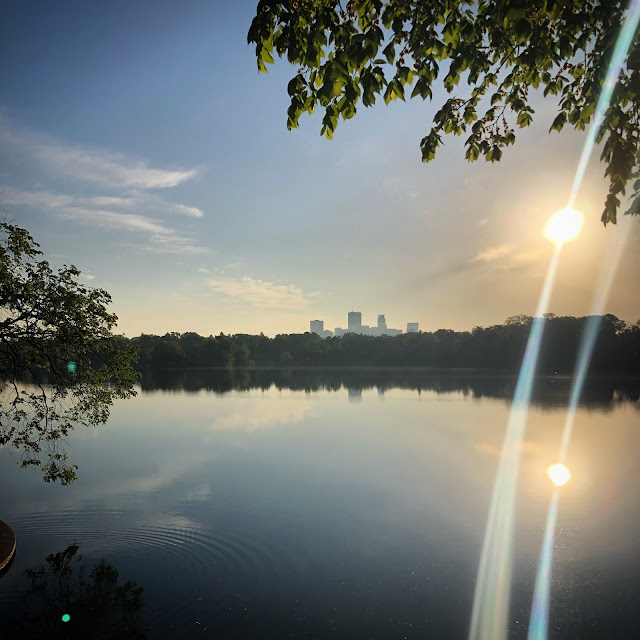 Run by Cedar Lake, this is where my swimming practice will be taking place. Gorgeous isn't it!? 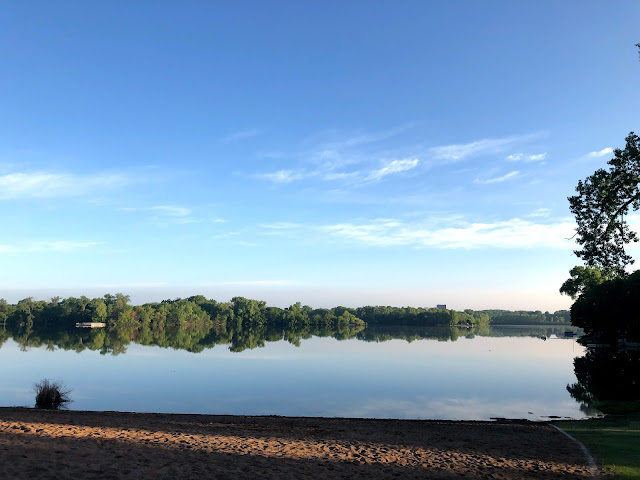 After lots of looking and research and reading reviews I landed on an inexpensive wet-suit off amazon. It also arrived Wednesday and went on MUCH better than the small one I tried on the week prior. So it's official, I'm going to do this (I still have yet to swim in it but will hopefully before the end of the week). 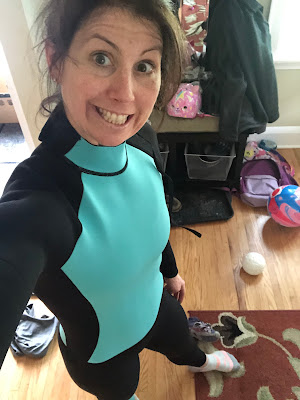 Friday morning was my turn to get out of the house again. So this time I was finally taking my bike out for it's first ride. I will say it's taking some getting used to. I have never rode a road bike before and since it's new to me I am getting the hang of the gears and shifting. I did not get clip in shoes or pedals. However I did get two sided pedals so I can make get click shoes for next year. I wanted to focus on one thing at a time. But right away this was so much easier to ride. I went around lake of the isles and lake calhoun and it was so smooth. It felt like no work at all! Well until I got off to take this photo I could barely walk! LOL it was quite hilarious. But had to get a photo :-) 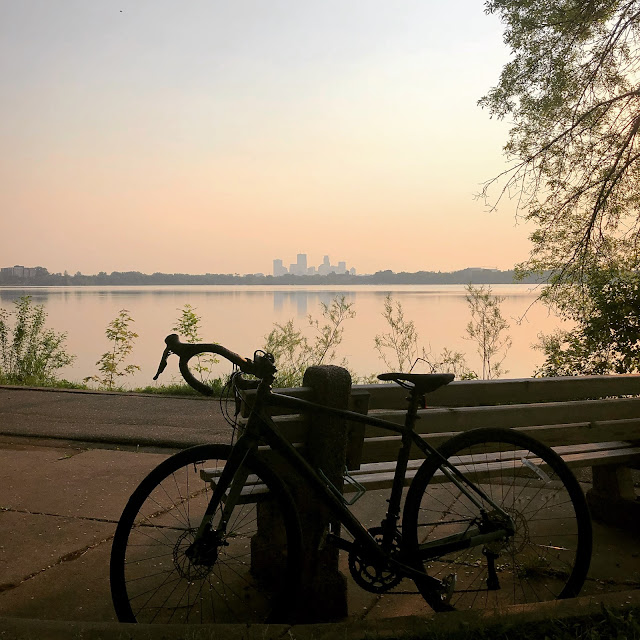 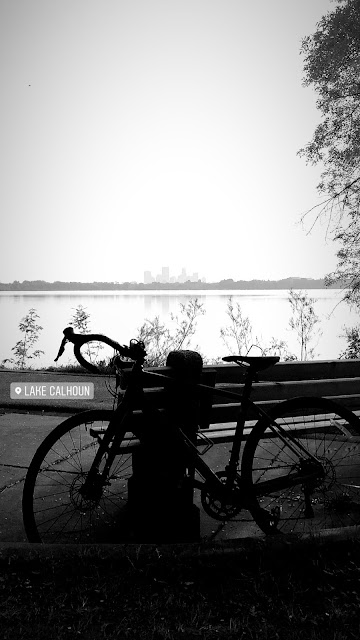 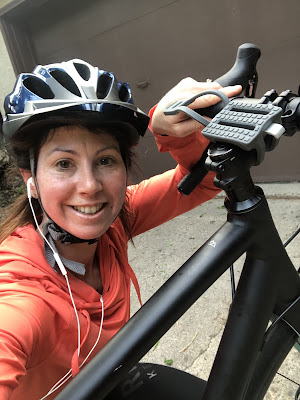 
I came home and did yoga for cyclist (felt amazing to stretch!) and enjoyed the little peeps and giggles behind me the whole time while I stretched 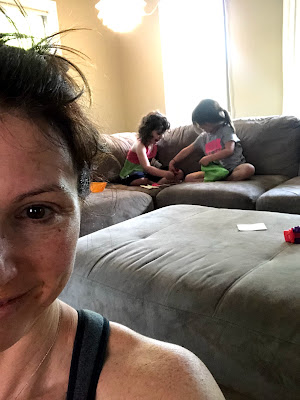 Then we went camping for the weekend and the thought of swimming was just hanging over my head. I am loosely following the training calendar but it does have swimming at least once a week. So i knew I needed to get there. The kids all wanted to go swimming Sunday evening after we got home from flag football (after camping) so we all went. Thomas hadn't napped and I had hoped he'd fall asleep in the stroller on the way there. Since he didn't Kyle went for a longer walk with just him to get Thomas asleep. We all ran into the water and immediately halted because it was so cold. There was no turning back for me because I NEEDED to attempt a swim. Mary ended up staying with me and we warmed up to the water. Isaac and Emma gave up and went up to play in the sand. Eventually I worked my way down into the water and went for a swim out and back. I planned to count about five strokes out but I don't think I made it that far before heading back in. I couldn't breath and was instantly out of breath. About that time Kyle came back with Thomas asleep in the stroller and came down to the water's edge and asked how it was and how far I went. I gasped "well i went out until I thought I was going to die and came back in" I said I was going to do a total of five laps out and back I just needed to catch my breath before going again. I have no clue how far I went and now clue how long it took me. But I did get five jaunts in and they slowly felt easier. Meanwhile the whole time we were there a tan old man in a speedo and swim cap was gracefully swimming the entire lake. He came out just before we were getting ready to leave. I can't believe how easy he made it look. I have some major work to do in this area...

We're not sure how cold the water was, but according to the inter-webs they are roughly 65-70 degrees right now. The outside temp at this time we went swimming was about 77 or 80 degrees. 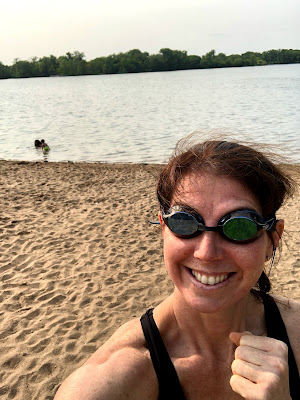 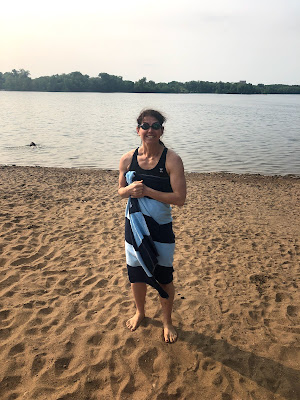 Sunday June 2nd Swim
5:00pm
Cold
5 times out and back
combo of front crawl out & breath-stroke back

Tuesday morning it was my turn to get out of the house. I went for a shorter bike ride. I wasn't worried about my bike seat after the first ride it was so smooth and easy. But as soon as I sat on my bike Tuesday morning my butt ached! Might be time to get some bike shorts, or chamois as they are called (pronounced shammy). I decided to ride up to a middle school in our area. Our school district is talking about re-zoning and they might change the middle school that we are assigned to, so I wanted to check out the potential. It's only a little over two miles away. It was a gorgeous morning for a ride. 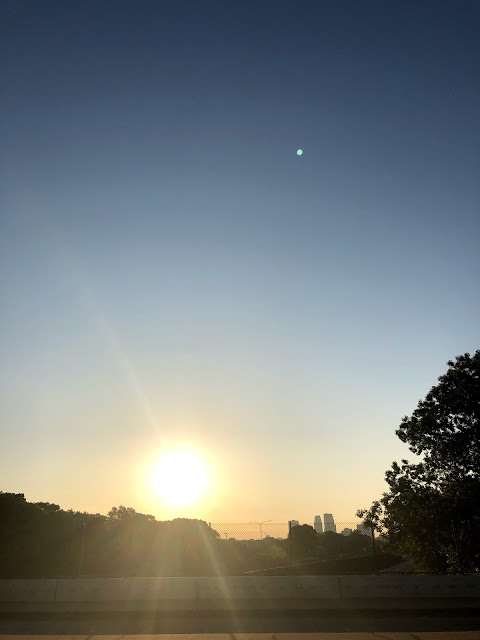 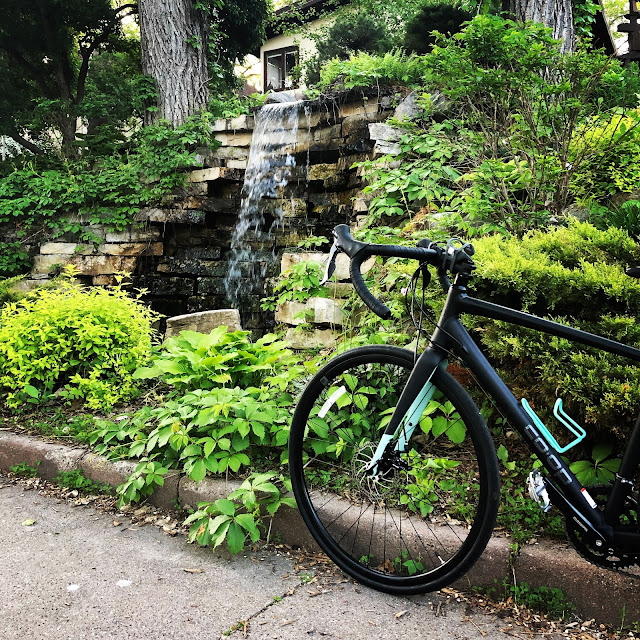 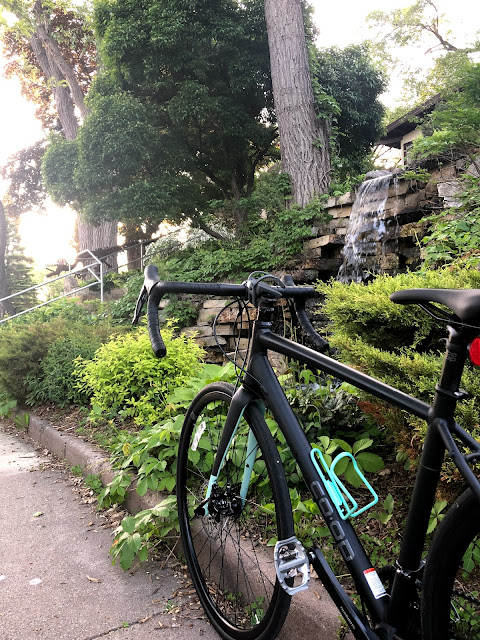 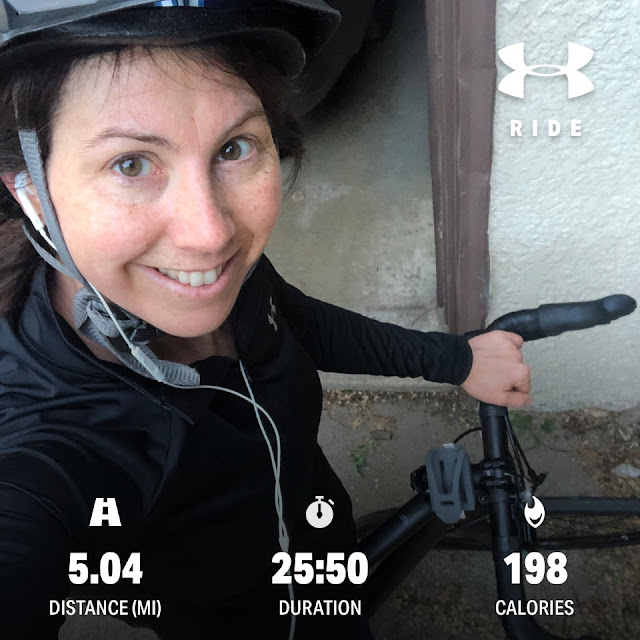 And that brings my training journal up to present time. It's Wednesday evening I'm working until midnight. Tomorrow is my day to leave but Kyle has to leave the house before 5:30am so it's looking like I won't be getting out of the house tomorrow. He is also traveling next week so will need to get training in other ways (ie: running with the stroller and biking with the kids) will make for variable training but I'm sure I can work it in somehow.

As far as gear so far, sold a bike bought a new bike. Bought a swimsuit on sale that fits my others would fall off of me. Bought a swim cap, had goggles from ten years ago when Kyle and I would swim at LA Fitness here in Minnesota. Bought the wet-suit. Already have good running shoes and even had elastic laces I put in them (helps make transition faster). Bought a tri-suit for race day.
Need to get:
bike repair kit that attaches to bike
bike pants for training

I am attending a Tri-Skills class with a mini-tri next Saturday. I also signed up for a bike class that we will ride the bike course and do a tire changing class afterwards, but that one is not until end of July or early August I think. Kinda freaking out about training the next two weeks with travel. Solo parenting for one week then we head on vacation out of state for the next week... running will be easy to get in but not the others :-/
posted at 6/05/2019 09:11:00 PM

200 yards will be a piece of cake! I did a sprint length one 10 years ago and would love to do it again sometime. Maybe next year?!?!