I mentioned Lila layed her first egg in this post on November 17th! She was 24 weeks old.
Well on November 25th, Beep Beep played her first egg! (At 25 weeks old)
We have the golf balls in the nesting box to help them know that's where they lay the eggs... but we ended up leaving it there because it can also help deter pecking at the egg. When they peck at the golf ball they realize it hurts so they don't peck at the egg. Not sure if it's effective or not, but we took them out after they were laying and Lila kept poking a hole in her egg so we put them back and it's seemed to help. Now we have 4 layers at the time I'm writing this... but I'll get to that in this post :-) 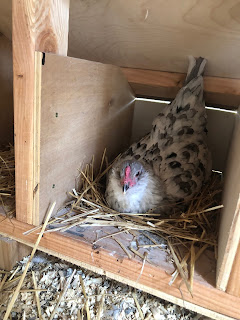 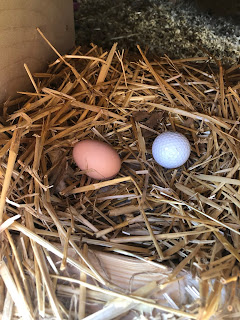 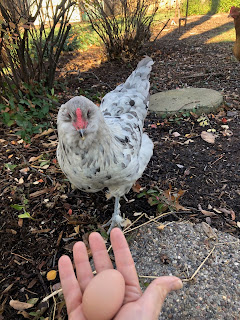 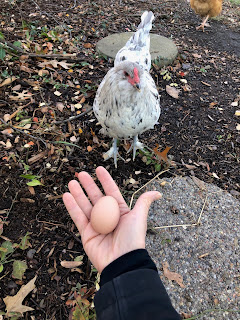 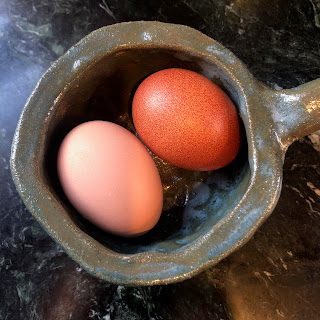 We were getting about an egg a day from Lila, she had missed a day here or there but otherwise consistent. Beep Beep is a long sitter, she sits for hours in the nesting box before (or after) she lay's We know when she has left an egg because she will be missing for what seems like half the day. Lila likes to come over to the back door and do her egg call after she lays an egg. I'll try and post a video of this egg song.
Soon after on December 3rd Cinnamon laid her FIRST EGG! 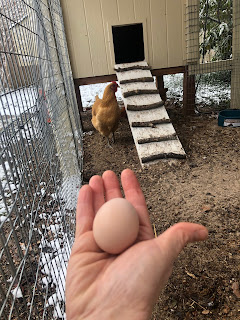 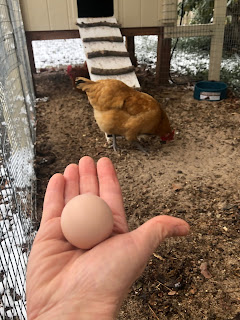 So we had THREE layers with all very beautiful colored eggs. Beep Beep and Cinnamon have similar colored eggs while Lila's is the darker one. 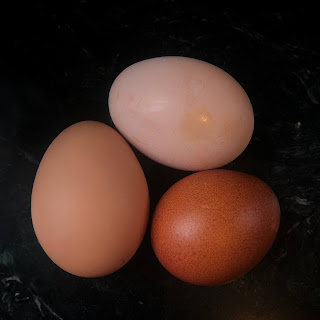 Here is a video of their egg call. The song they make before, during, or after they lay. Lila usually comes over to the door and does it after she has laid an egg. I was hoping to capture them laying but never happened in the long length of this video, haha.
And I even decked the coop for Christmas time :-) 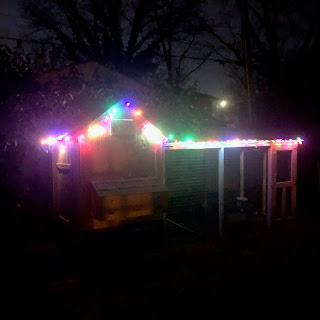 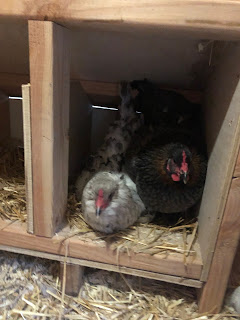 On December 6th we found TWO eggs, one from Cinnamon and one was Sunset's FIRST egg! They both are a week older than our original three. So at this point their first lay was at about 27 and 27.5 weeks old. Their breed tends to lay EARLIER than easter Eggers, but I think with the stress of the move and new environment that is probably the cause for their egg laying to get pushed back. 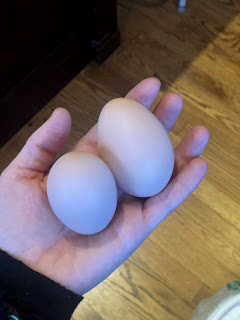 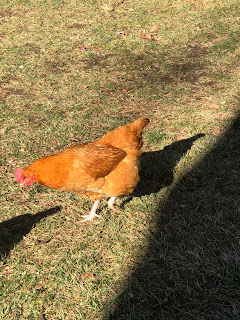 I had been trying to capture a photo with the bird and it's first egg so you could see the color, but since we weren't sure who's was who's, I just got a photo of Sunset. They are both the same color however. So the two red/brown girls lay the same color and it's pretty much identical to BeepBeep's as well. 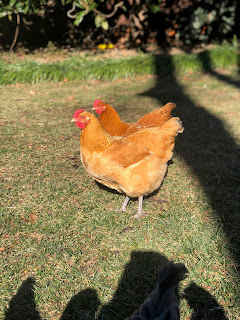 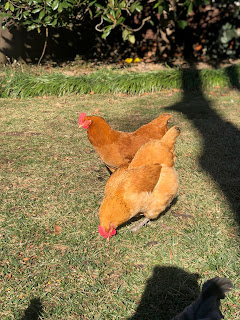 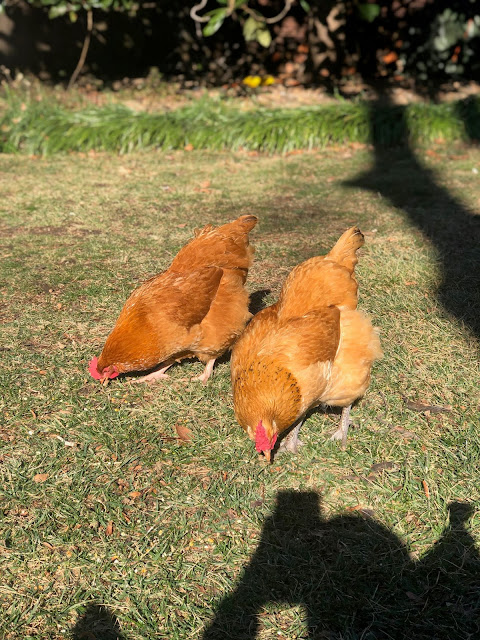 As you can see the one egg is way bigger than all the rest! Turns out it was a twin egg!! The next day we discovered the double yoke when we cracked it open. 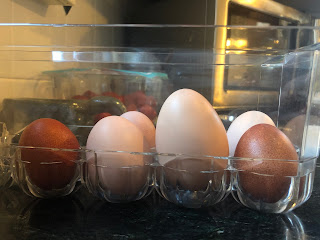 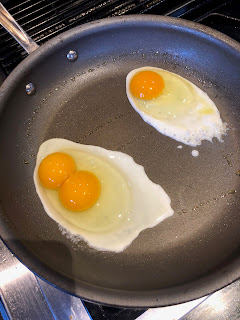 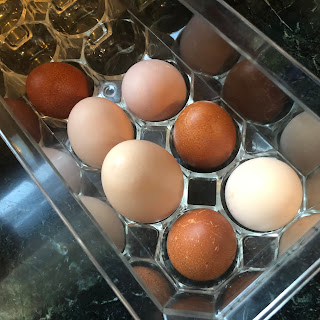 So now we have four layers and are getting 3-4 eggs everyday! So fun to check the box.
Oh I should mention about the beginning of November I did put an LED solar light in their coop at night to give them a few more hours of daylight. Since it gets dark before 5:00 we turn it on about 4:30 on a four hour timer to give them some more light in hopes to help with egg production. It must be working... or maybe not, who knows. But we're getting EGGS! 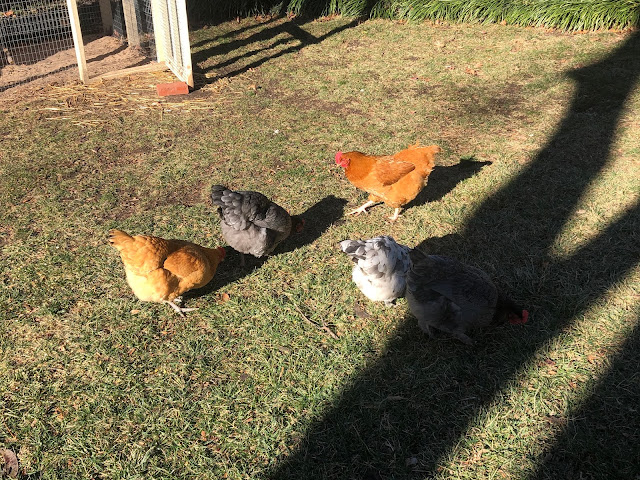 These next photos are from the other day, it seemed like over night Cinnamon and Sunset's combs just grew a ton! It's crazy how different they are too. Cinnamon has a bunched up clustered comb, and Sunset's is long and floppy. That's it for the chicken update. Still waiting on Bernadette to lay an egg. She's the last of the easter egger so hoping for a BLUE or OLIVE egg. BeepBeep was born from a blue egg but she's not laying blue eggs. Come - on Bernadette. OH I have one more update... lemme post the combs first: 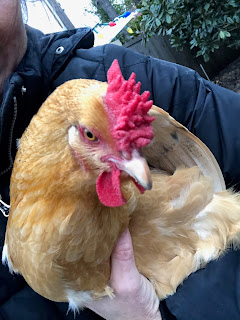 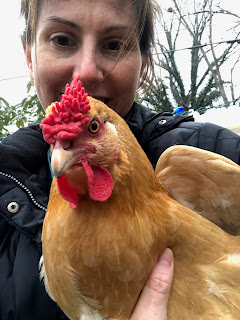 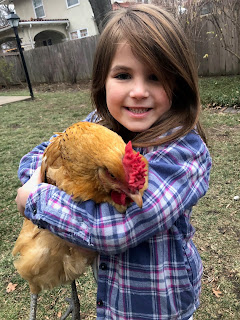 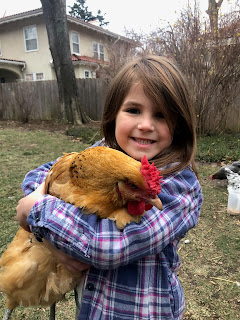 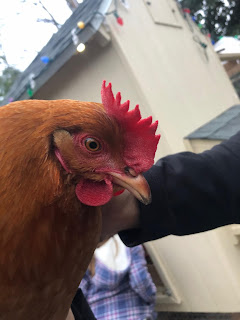 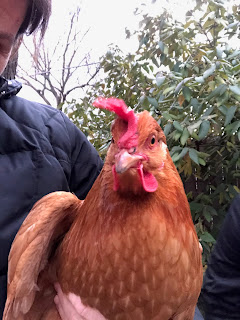 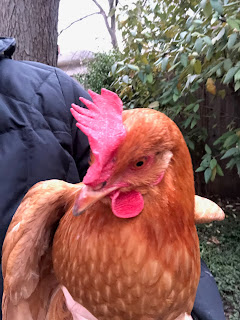 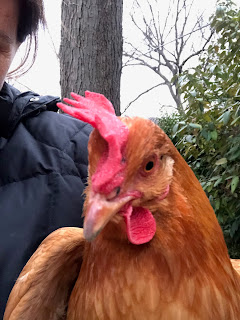 I mentioned Bernadette isn't laying... well she is always the mouthy one and chases me down wanting cracked corn any time she sees me, so I usually pick her up to snuggle. Maybe she just likes snuggling. I did grab her over by the swings the other day and took her for a ride a couple of times. I think she liked it, lol.
posted at 12/15/2020 02:31:00 PM