What is our luck and back yards with no grass? lol Back in 2008 when we bought our first home the backyard was a wreck and we bought a sledge hammer, busted up concrete and laid sod.

Well our new house was definitely in better shape but no grass.  Here are the before pictures: 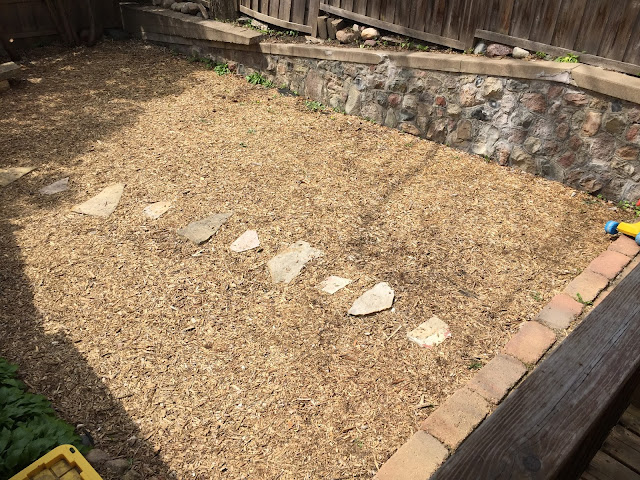 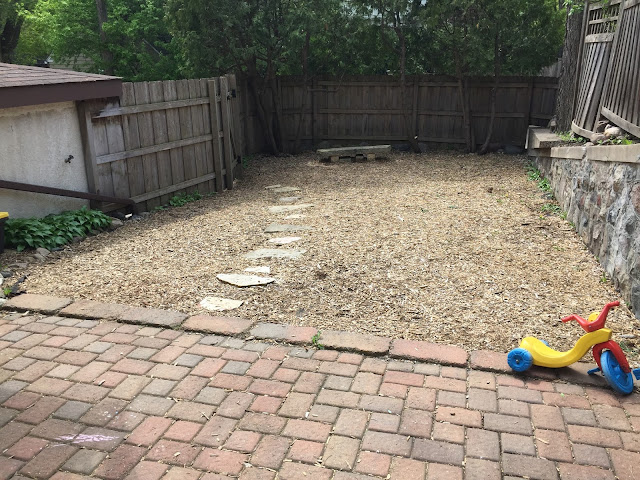 There was a thick weed barrier underneath which made this great for us because it could be done in phases. We worked on clearing the woodchips and relocating them to other parts of our yard (south side of our house needed a new layer of mulch). The kids were enthusiastic about helping clear and rake and shovel. We started about mid-May. 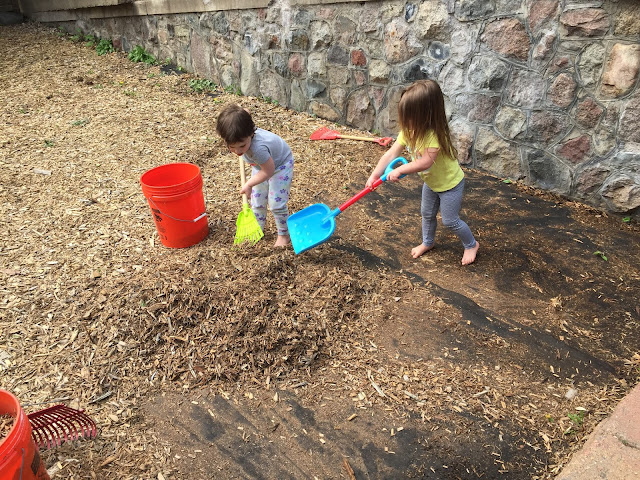 Then at the end of May we pulled up a 2'x8' area for our raised garden bed and discovered there was ANOTHER weed barrier under another layer of woodchips...

You can see here we had almost all the woodchips raked back to around the area we planned to stop. 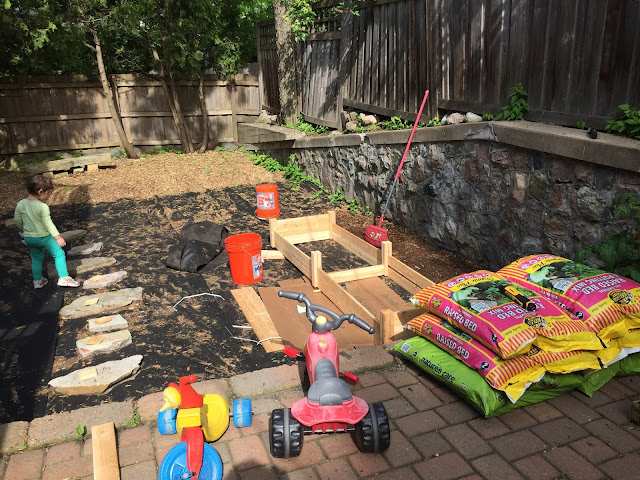 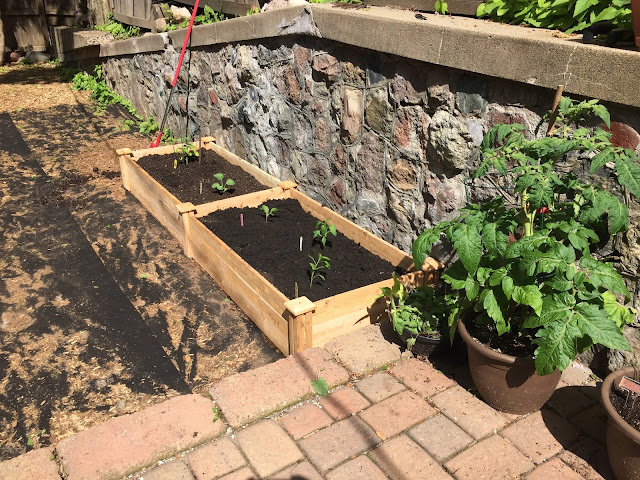 Then father's day we laid sod on half the backyard. Kyle went to get it while I started on getting the additional layer up. It turned out to be a lot more work than we had planned and wished we would have prepared the yard before having the sod. But it was one of those things if we didn't just do it the amount of work would have been a discouragement from getting it done. So we've had half grass for a month or so and it has grown pretty good. A few spots Harpo has killed but nothing horrible. 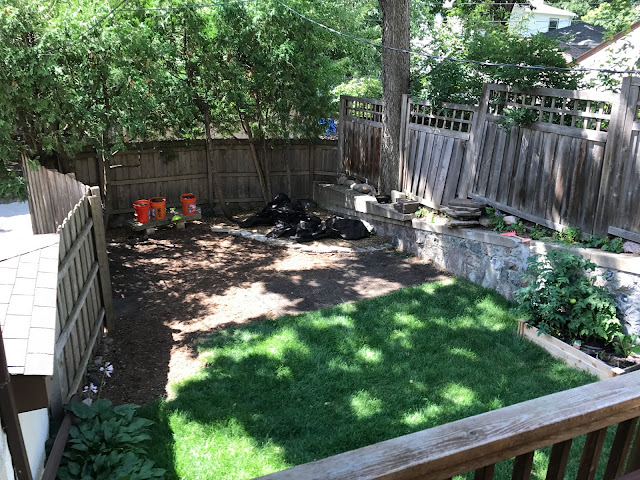 We had sod on our list to get finished before baby came... but that didn't happen. We had a pile of woodchips that was slowly getting taken from a guy who responded to my craigslist post. He ended up taking it all the day Thomas was born so we knew we needed to get the rest finished how that the pile was gone. Saturday we got up the other weed barrier and someone different came that evening to get the small pile.

Then while we were all napping Kyle picked up the sod on Sunday and finished the backyard! Woohoo done in time for him to return to work Monday. 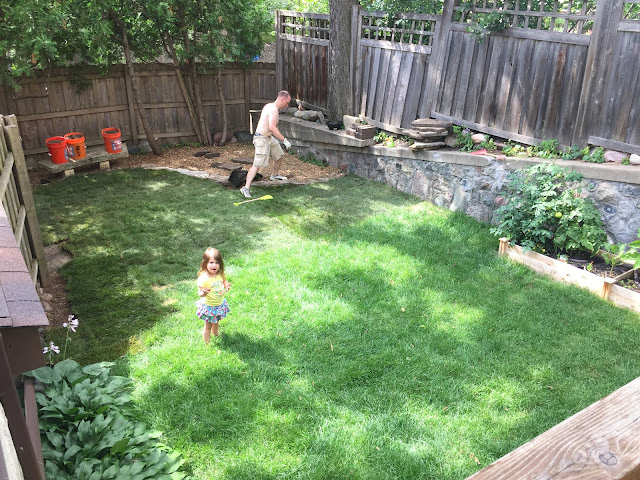 Now it's complete and looks SOOO much better! Excited to have grass! 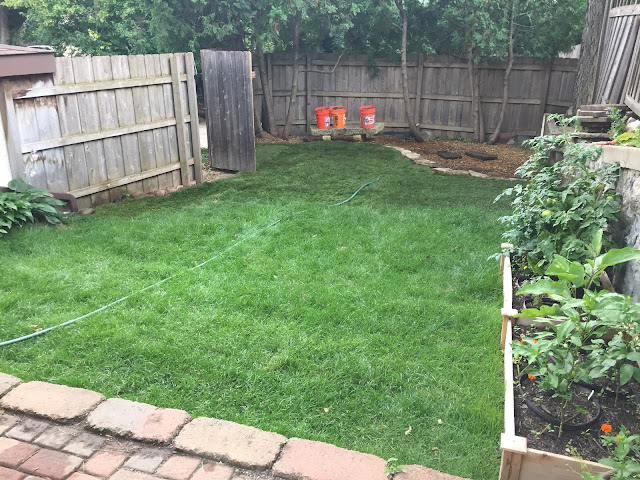 And while I'm at it, here is my garden update.

Sweet pepper and jalapeno pepper. And the eggplant is growing good, just no fruit yet, two blooms though. 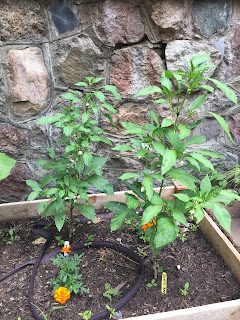 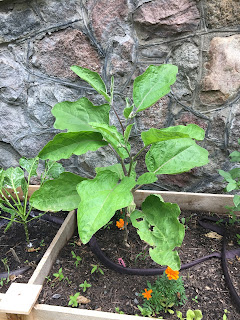 My broccoli plant is thriving... it had a worm nibbling on it's leaves but I've been trying to get out there to spray it after each rain which appears to be helping. I have three little leaves that have no signs of nibbling so far. Not sure if it'll produce anything or not.

And our two tomato plants are growing like crazy. I don't think our garden gets enough sunlight so it's been slow to produce. I'll have to look into low light gardens next year and do a better job of planting things that will do better with only 4 or 5 hours of sunlight. 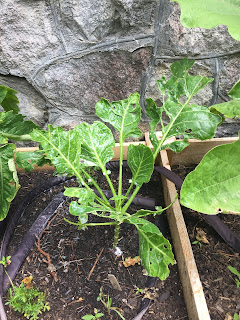 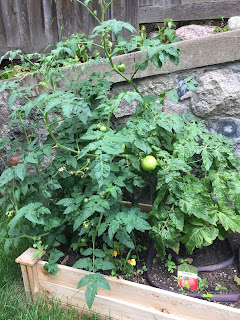