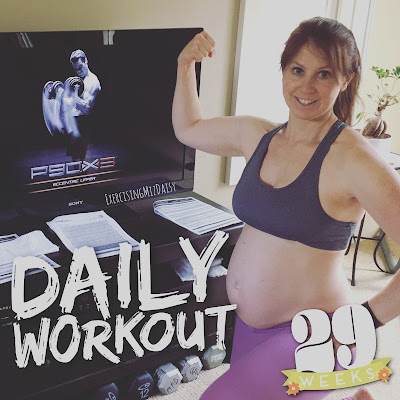 This program has a three month schedule, divided into one month segments or blocks. The first block has a week of workouts that you then repeat for three weeks followed by a transition week. The second block is similar with three identical weeks and a fourth transition week. The last block or month mixes it up a bit and has a 1/3 schedule and a 2/4 schedule ending with a transition week they call the victory week. It was nice having just three weeks of the same workouts because I feel like that gives an added boost of motivation.
First week "yah great new workouts"
Second week "this again"
Third week "okay one more time of doing these before we switch it up"

The transition week was hard for me because it was pretty low key but I knew it would be good for my body.

Being pregnant I obviously had to do more modifications than I normally would. This is a heavy push up/pull up program but I kept pushing with those either dropping to one or two knees and using a chin up assist.

I will say this was my first Tony Horton workout full through. Now I do my workouts in the morning while my kids are around and he does make a few (okay a lot) of comments I would prefer my kids not to hear. My son even remarked giddily "I like when he says stupid" ::eye roll:: He also tended to make sexist/racist comments that bothered me but I let roll off my shoulders ::double eye roll:: I thought maybe it was just me but another in my challenge group doing the same program noticed as well. Anyone else pick up on these? Like every woman in his program was a cheerleader or dancer, so he claims?

I did like that each workout had a full unique set of moves. There weren't sets or times you really repeated a move which kept the workout intriguing. 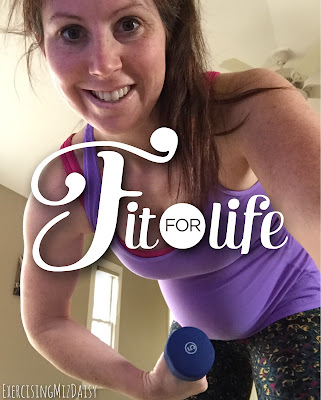 Block 1 Workouts
This month might seem easy or less challenging because it is yoga movement focused but it was still difficult and beneficial to my body.

Total Synergistics This was a lower key full body workout or felt that way at the start; maybe I just had to do more modifications because I'm pregnant. The second half utilizes weights. the first half has more pull ups/push ups. My heart rate never went into cardio range but I was in the fat burning zone the whole time. Great feeling afterwards with some yoga moves thrown in.

Agility X is the only workout he requires the tape on the floor. We put the tape on the floor for the first block. But ended up only doing this workout once. In block 3 it shows up again. I did it again just without the tape. It is basically running around, through, and over your tape lines which can be done without. It was a good cardio workout which my husband subbed out with running a few times.

x3 Yoga This was a good yoga workout. With my growing belly however after I did it one time I decided to sub in a different prenatal yoga DVD I had. Just better moves for me at this stage.

The Challenge I thought this was crazy when I read ahead. A whole 30 minutes of only push ups and pulls ups. Kind of scary. I skipped it the first week and did a maternity workout, but decided to attempt it the second and LOVED IT! I couldn't believe the workout I got from those two moves alone. Granted we were doing different versions of each and working different muscles but a great workout none the less and I felt it the next day, so that's a good sign! 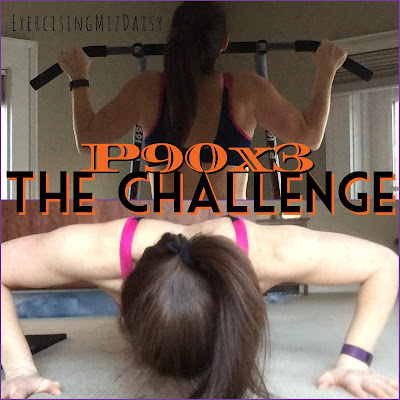 CVX I loved this cardio one, probably got my heart pumping the most out of all the workouts.

The Warrior - being pregnant I really had to modify this workout. I ended up making up my own full body workout on the BOSU to do in place of this one. 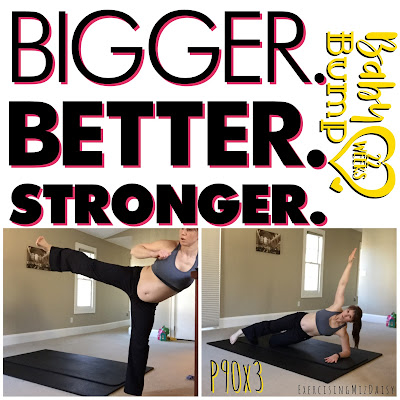 Transition week workouts:
Isometrix is a nice low key workout made up of holding yoga moves. It could almost be considered a yoga day, but holding a move for 45 seconds, lots of balance moves was a little tougher than an average yoga day. It's hard for me to be a fan of these low key workouts because I want more heart pumping, muscle building feelings but in the end I can tell it's doing something because I feel better and my body moves better. 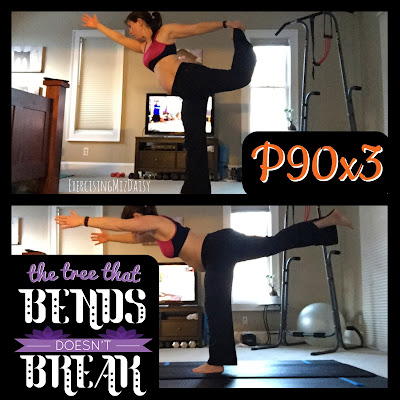 Accelerator is a good sweat. I was a little unsure of it during my 2nd block transition week. Being 25 weeks pregnant I wasn't sure how "a lot of jumping" as my husband said leaving for work was going to work for me. But I tried it anyway and only had to modify a few moves due to my belly. Planks and moves on the floor just don't work for me at this point so I'd either do the move standing, do pelvic tilts, deep ab breathe work, or kegals in place of the plank moves :-) But overall I liked this one. I did it again at 30 weeks and felt good. Lots of modified moves but still made it through!

Pilates X I can't write a review on this one because I totally skipped it. My husband did it and said it was definitely challenging and not something my pregnant belly would probably allow me to do.

Block 2 Workouts
I loved this month because it was more weight focused and I love weights!
Eccentric Upper & Lower These were similar to any other upper body or lower body workout. He used a three count slow movement going into a move and then a quick release coming out of the move.

Triometrics is not what it seems, I thought it would be a lot of plyo moves I would need to modify but it was doing one more three ways, increasing difficulty every 20 seconds for 1 minute per move. The modifier stops at the second move and doesn't advance to the third, which is what I did for most moves. It's a lower body movement with lots of balance/one legged reps. I enjoyed it and actually looked forward to it when it popped up in block 3.

Incinerator When I read this I thought it was going to be more cardio focused and something with crazy moves Tony makes up. But once I did it I was happy to discover it was more of an upper body workout: weights, pull ups, push-ups good mix. Great back workout and I enjoyed doing this all three weeks. 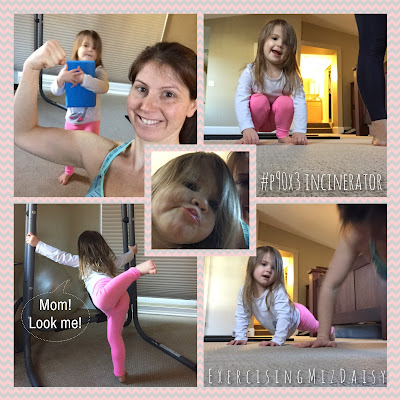 MMX is a typical martial arts workout. Kicking, punching the air. Really not my favorite but a great cardio workout. I did it! Even though I'm not a fan of MMA.

Dynamix I utilized this day as a rest day until one week in the second month. I'd have to say it wasn't my favorite stretch workout and felt like I was doing more work on my body than I would have liked on  rest/stretch day. However my husband enjoyed it and did get a little sweat at the end. His muscles get pretty tight so this entire program has been great with all the added stretch and yoga moves.

The transition week was the same as what is in the first month. 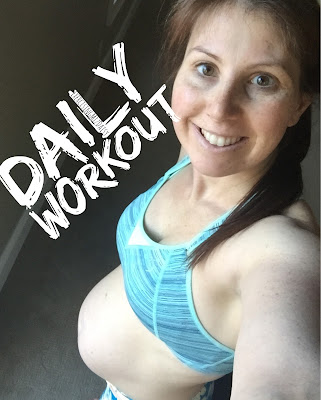 Block 3 Workouts
There's nothing like a final month to bring on new motivation. The entire block wasn't made up of new workouts but there were a few here and there. it was separated into two different week rotations. Week 9 & 11 and weeks 10 & 12.

Decelerator was a good one. Some jumping with slow landing and cardio moves. I was able to do most of it while pregnant. Just a few modifications, especially with the floor super mans.

Complex Upper: this one showed up twice in the third block with the option to do it or The Challenge (from first block). After hearing my husband's experience I skipped it the first week. He said he got a great sweat in but that it killed his toes and he needed shoes and there were just some really challenging moves. He opted to do the challenge the second time it was an option. And in another challengers words "it was brutal". I did end up doing it the third week. It was good, I had to make a few modifications and roughly 27 weeks pregnant I moved from the chin-up max to just doing bands. This workout had five moves that you repeated four times. Very similar to The Challenge and since I was doing modifications it was basically like the challenge for me with a set of military presses thrown in.

Complex Lower: I liked this one, good tough lower body workout. Four rounds of 5 moves. Oh that DS Double L move is a killer. Deadlift, squat, lunge, lunge - great way to get that heart rate up and work those legs! This was a high calorie burn workout for me even with the preggo breaks. 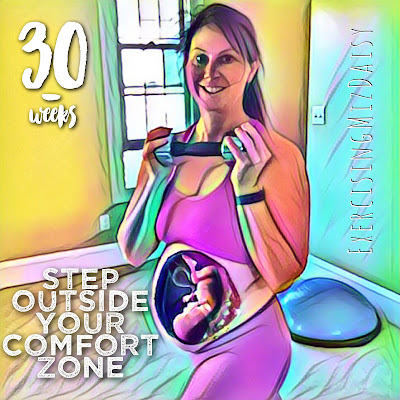 Results
So my results weren't really too exciting. I gain inches in my waist and chest (duh!) but everything else stayed the same. I would say the accomplishment with this program was just getting through the entire thing, beginning to end throughout my pregnancy. Many excuses present for me to stop and many expectant women use those excuses, but for me it was deeper and I knew I was staying healthy for just myself. 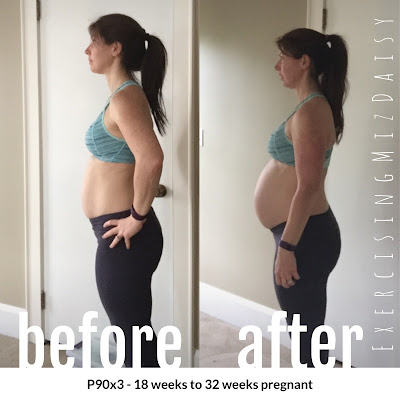 Email ThisBlogThis!Share to TwitterShare to FacebookShare to Pinterest
Tags: beachbody