Wednesday morning we woke early, loaded the van and headed over to the St. Paul Union Depot to catch the Amtrak to Chicago. It was a eight and a half hour ride, much more cheaper than flying and better than driving since Kyle and I didn't have to be at the wheel. We were all pretty excited for our first real train ride. 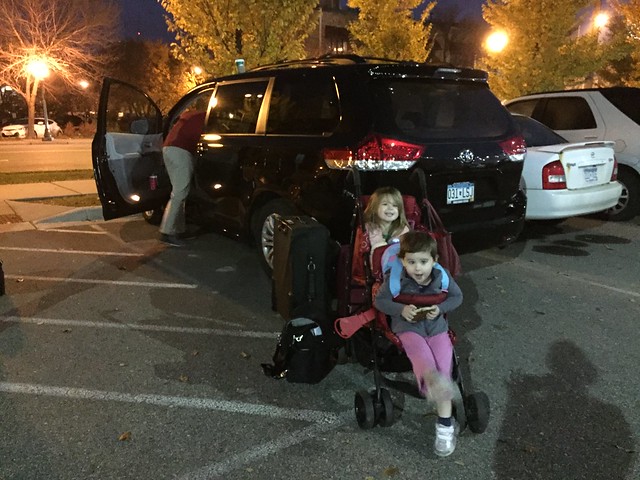 We boarded in Coach Class 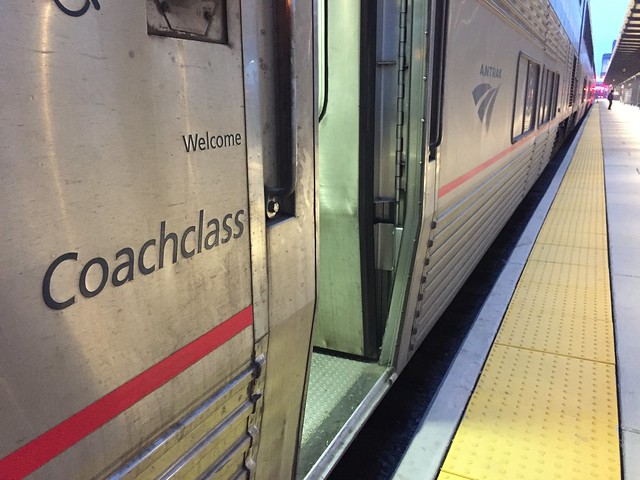 And settled into our assigned seats. We actually only used up four seats even though we had five tickets. 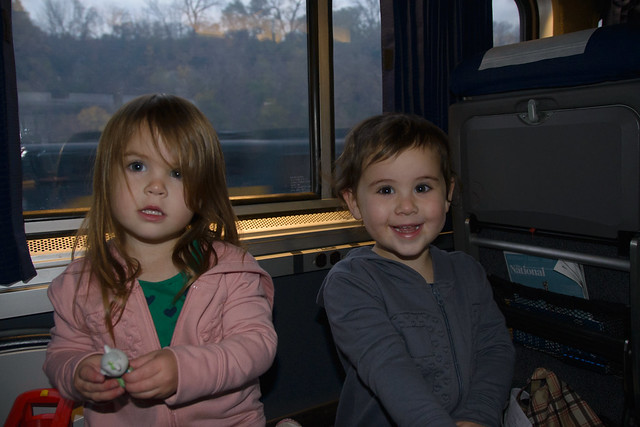 We were on the top deck, the luggage and bathrooms were down a small set of stairs. 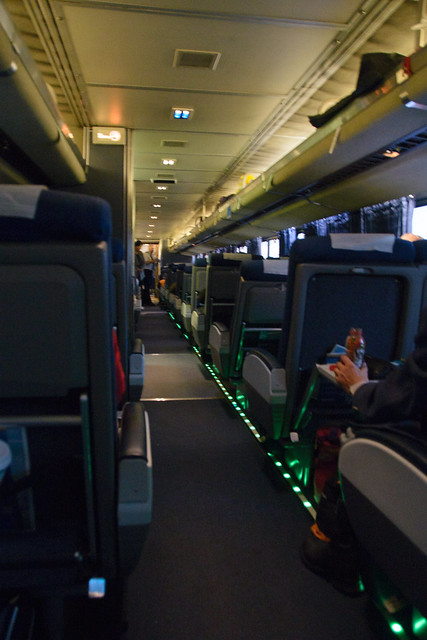 Our train was called the Empire Builder 8 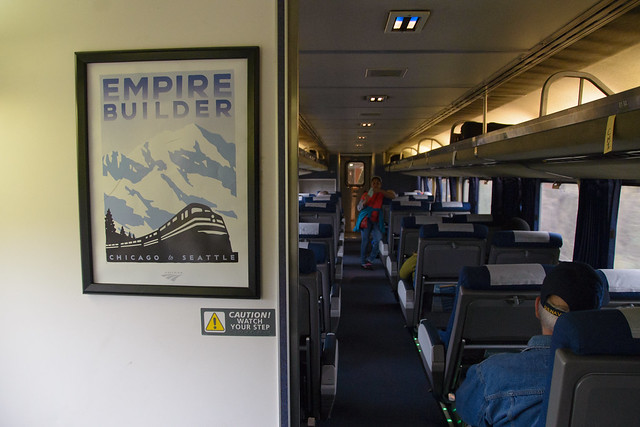 We boarded the train when it was still dark. Luckily we were just one car away from the lounge car/observation deck, so we made our way there to spread out a bit. We first sat at a table to let the kids play and look out the window 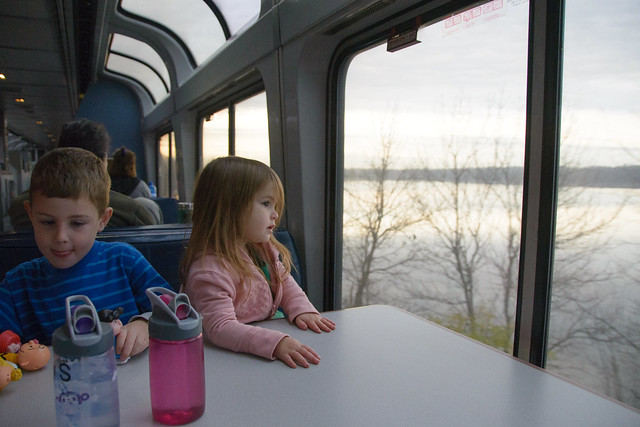 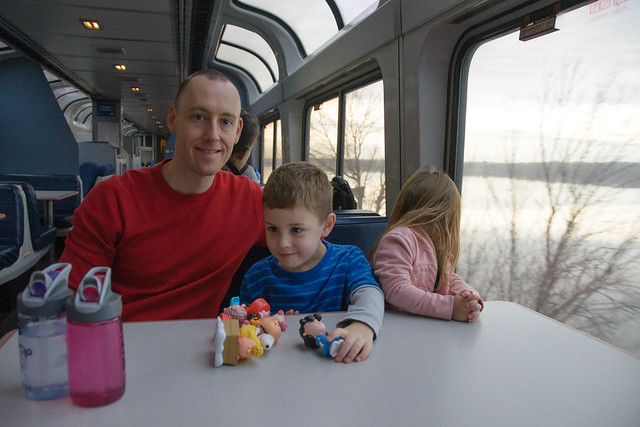 The fall scenery was beautiful outside 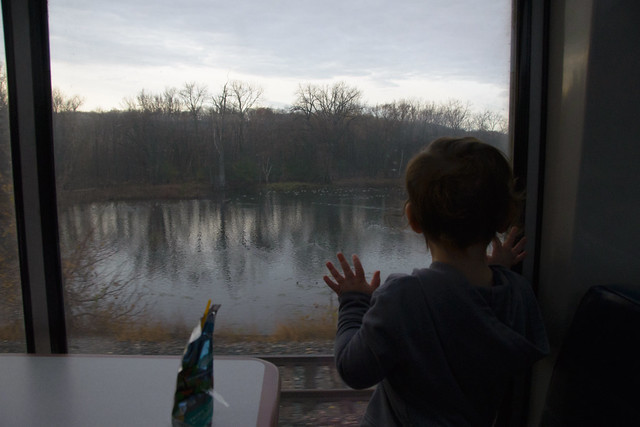 Here we are going through Red Wing 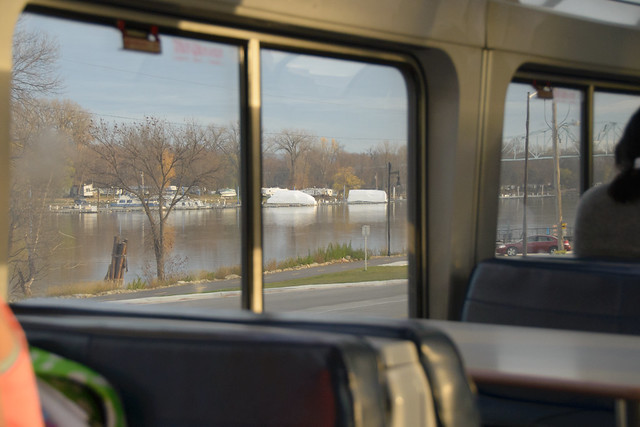 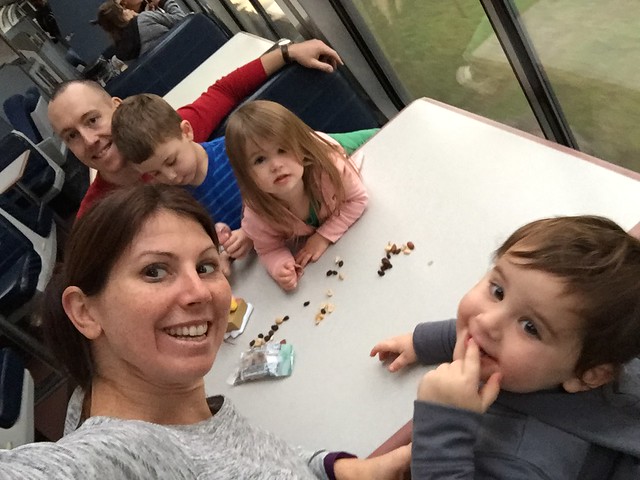 A little while later some seats opened up down the car and we moved to some open seating with better space for the kids to move about. 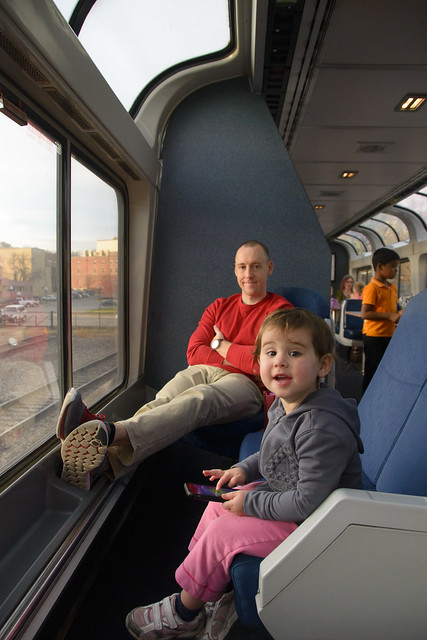 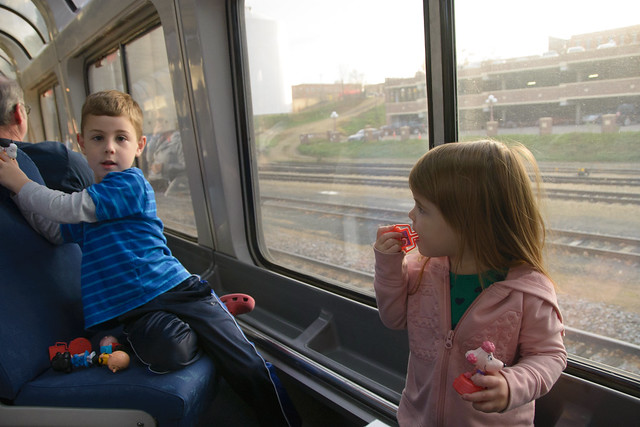 They were already getting pretty antsy and it wasn't even 9:00am yet, but we broke down and let them pull out their iPads. 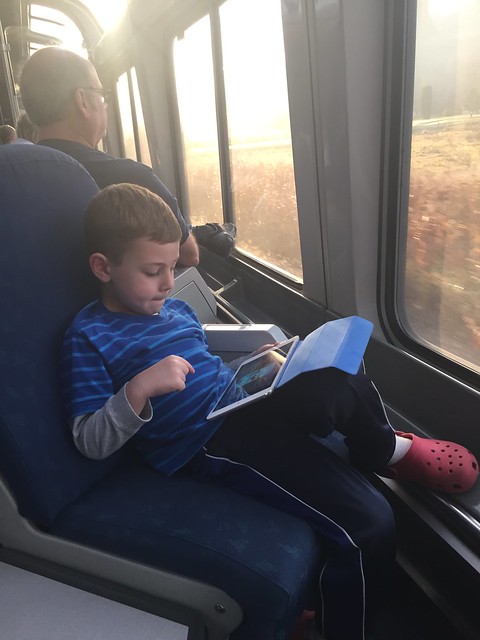 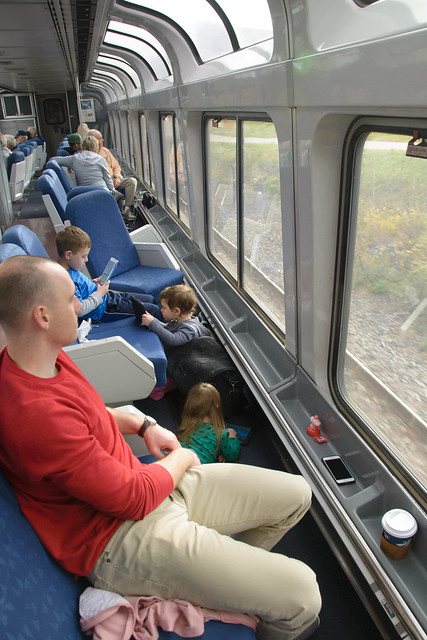 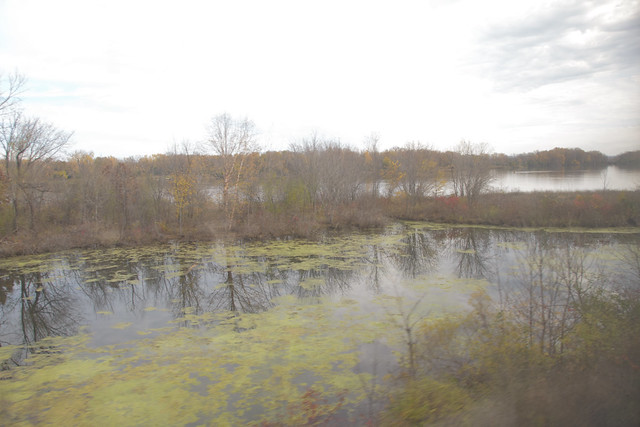 We went back to our seats for a little bit, trying to kill time. Then we headed to the dining car for lunch. We had no idea what to expect with the whole train ride, packing luggage, packing food. So we had minimal snacks. We realized we could have packed bags of food, which we planned to do on the way back. But since we all needed to eat something of substance, we spend some $$$ in the dining car and got to experience that. 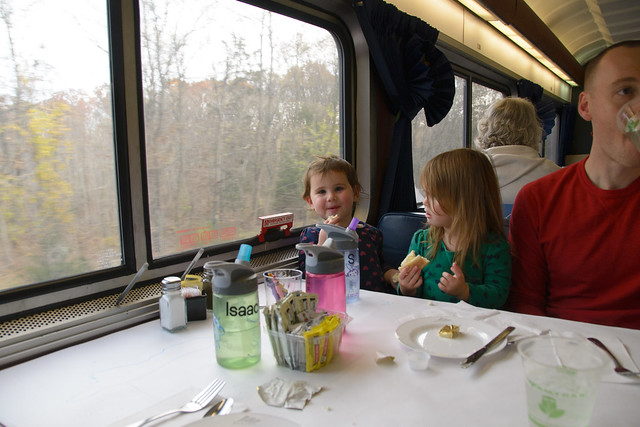 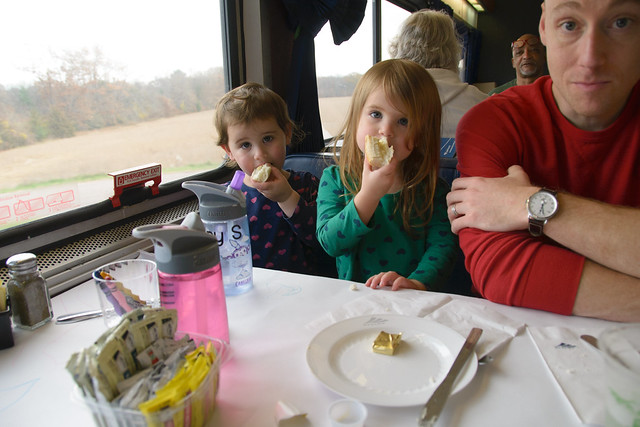 We all enjoyed rolls while we waited on our food. 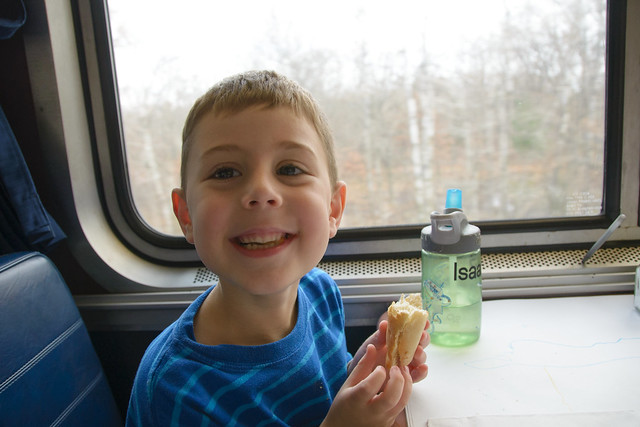 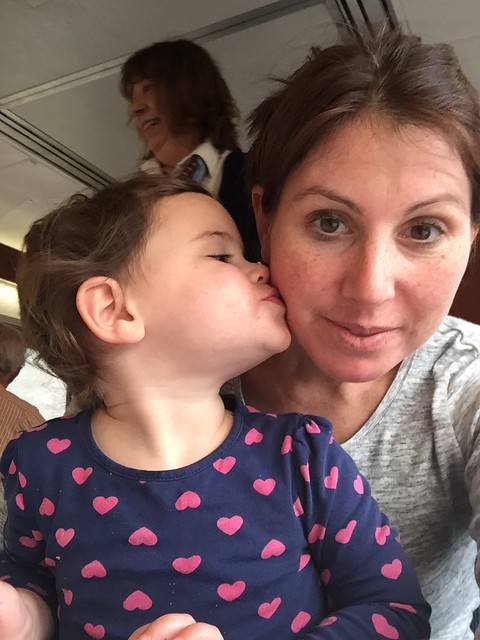 After lunch our hope was for the girls to relax and take a nap. Eventually Mary did give in, but Emma wasn't into it. Out of the two, Mary would be the one to need it most so glad she got some shut eye. 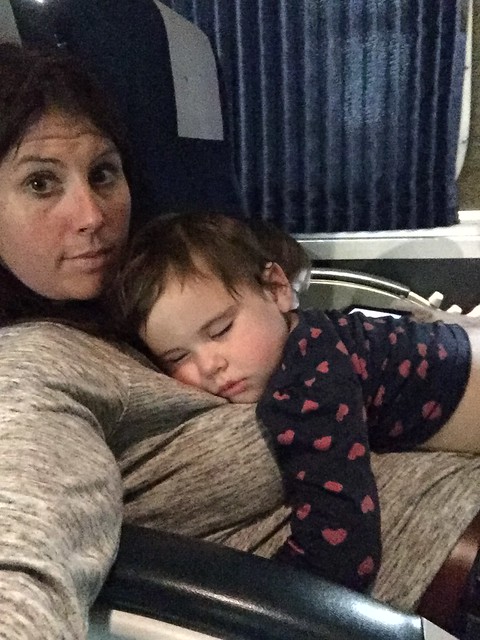 We arrived in Chicago at Union Station and made our way up to the street. Since we were pushing a stroller it was rather quite the maze to get up to street level. We caught the 124 bus that would take us straight to our hotel. 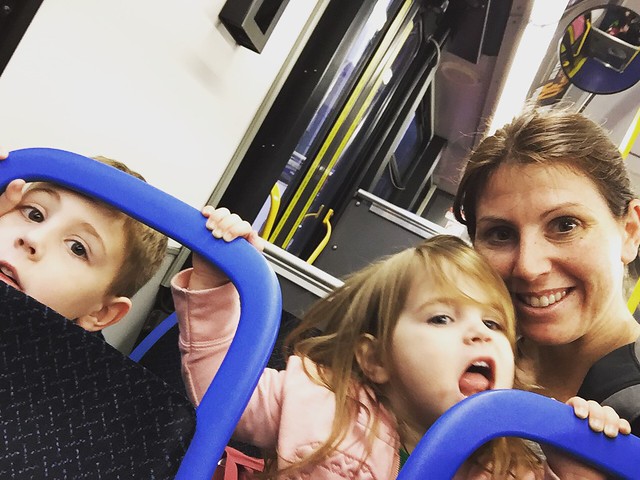 We were blessed to have a friend loan us the same stroller we borrowed for San Diego. It's a great compact double stroller that folds up nicely. Isn't the easiest thing to push, especially loaded with two full grown toddlers, but it was awesome getting it on the train, on the bus, and in tight spaces. 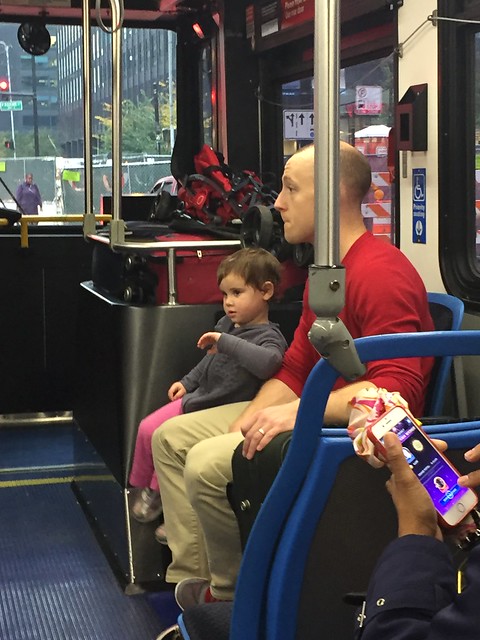 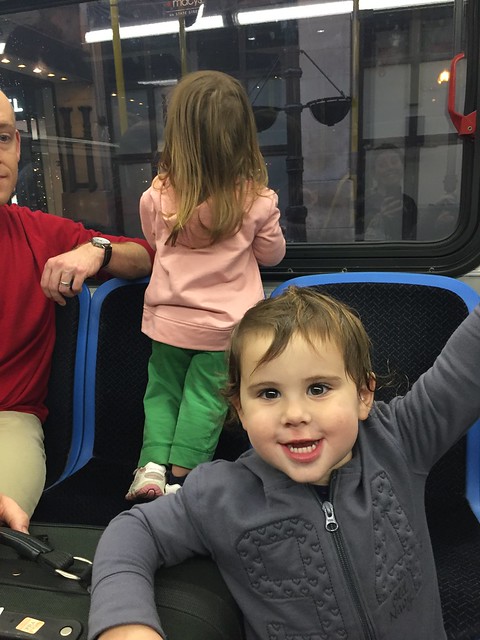 We arrived in our hotel room and it felt so good to take our shoes off, stretch out, and put down all our bags. The kids had fun running around and getting some energy out as well. 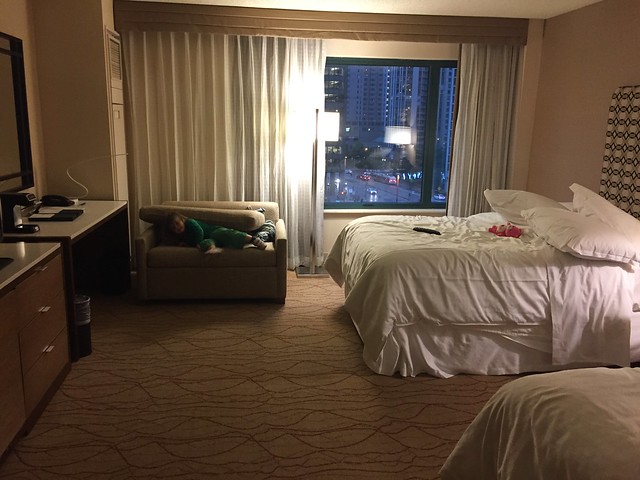 We had a really nice view of the Chicago River and Columbus Ave. 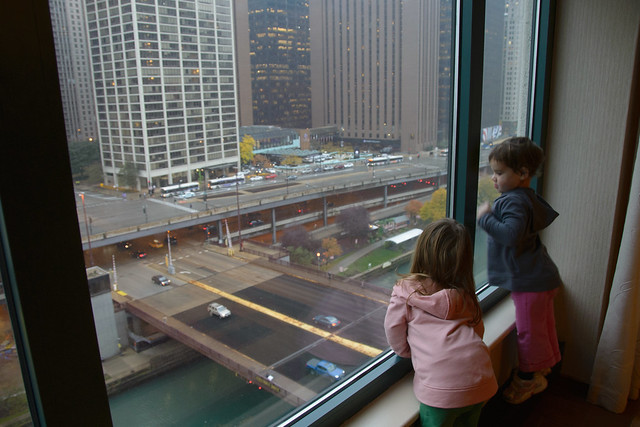 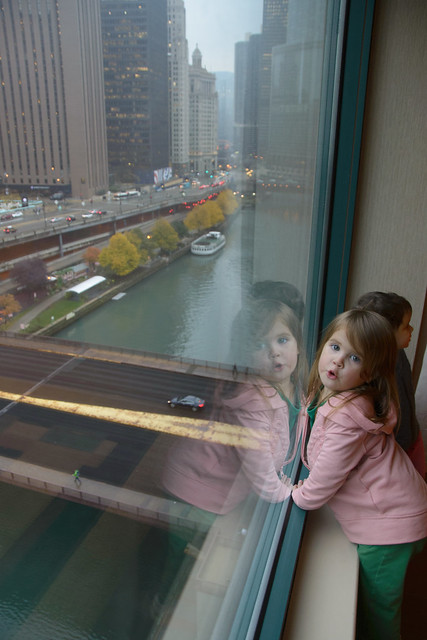 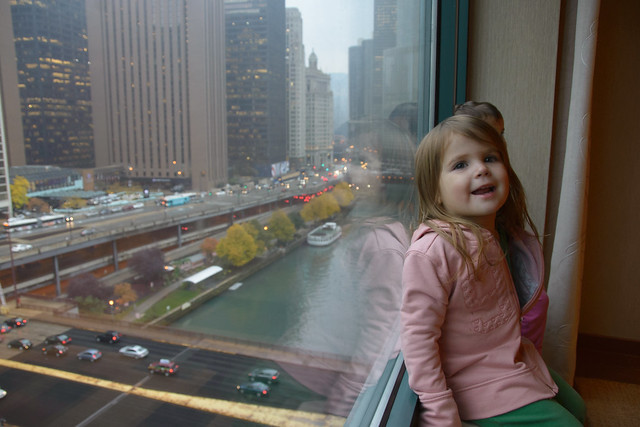 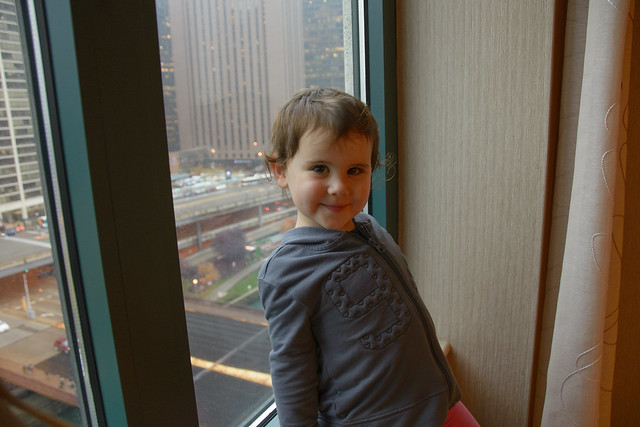 We headed out to dinner, but with the 7th game of the World Series about to start, all of the sit down places were pretty packed. We ended up at Chipotle and as we sat down to eat we looked out the window to see it pouring rain. We checked the radar and it was quite the storm and looked like there was no clearing in sight for the evening. We had about a half mile walk so we didn't really want to chance it. So we called an Uber and got picked up. The kids enjoyed riding and rolling around in the back third row seat.

Once we got back to the hotel it was time to relax and get the kids bathed and down for bed. Once they were somewhat down, I headed down the block to hit the local target for a few things we forgot and some food. I got breakfast, milk, workout cloths for Kyle, fruit... on my walk back I stood and watched the largest rat explore the side walk. This is a horrible picture and I can't really even tell where he was but he was SO LARGE! I think he's in front of the tree or maybe that shadow ball in the middle of the photo. Anyway it was pretty entertaining to watch for a minute or so until he disappeared into the tree grate. 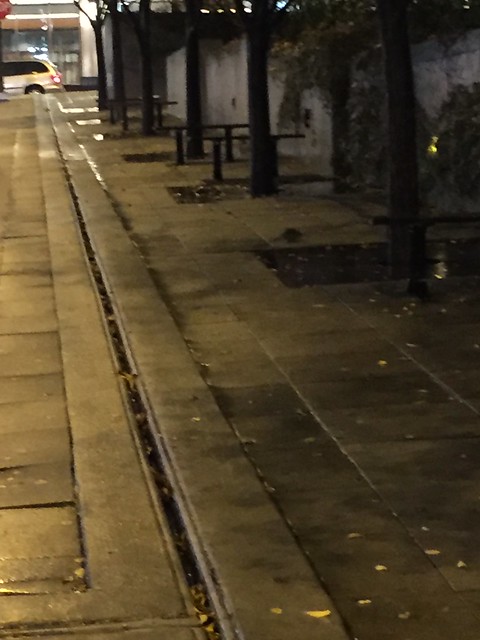