Friday we hit up the state fair, can't believe summer is already coming to a close. This year we got to take my brother who happen to be in town this week. It was fun getting to share this tradition with him.

We didn't get out as early as planned but that's okay, since the babies still don't let me sleep all night I would rather go with the flow than set an alarm and lose sleep. We arrived about 10:30. They were calling for rain but I had my eye on the radar from 4 am on and it appeared to be staying south of us and fading out just as it hit the cities. It was a wonderful cool morning, perfect fair weather.

We parked and entered the main gate after a .8 mile walk! 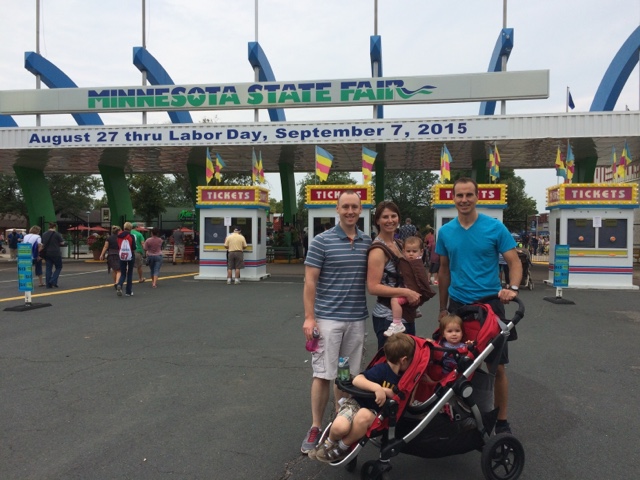 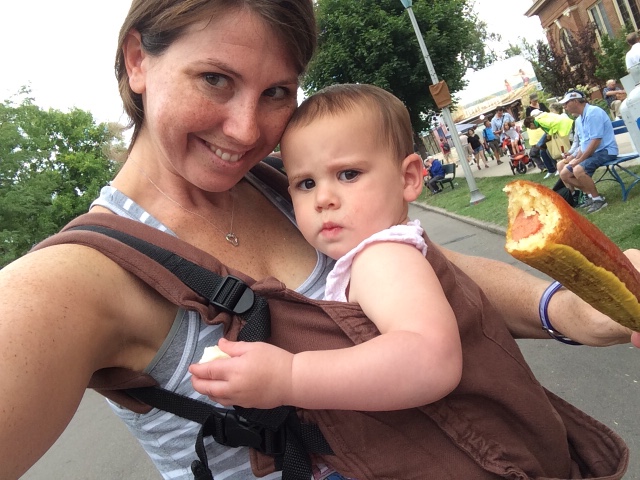 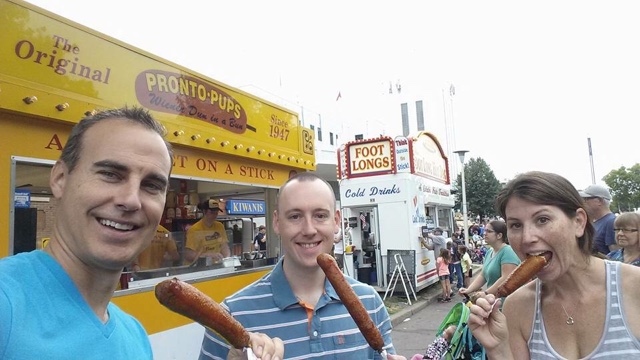 Then we made our way to little farm hands. Isaac had fun, still not willing to wear the little apron. The girls enjoyed exploring too although didn't really participate in the farming.

Here Isaac is 'burying' his seed to collect the vegetable. Mary is trying to get in the dirt. 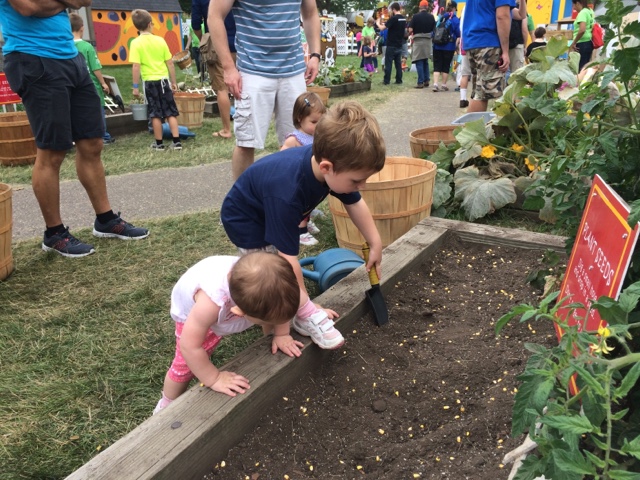 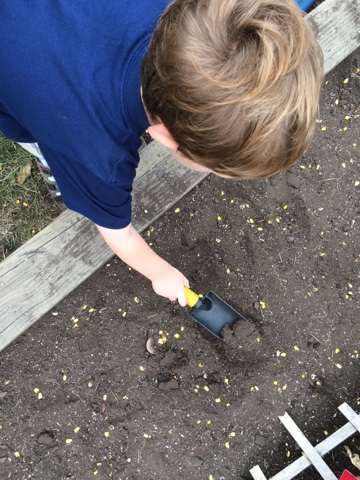 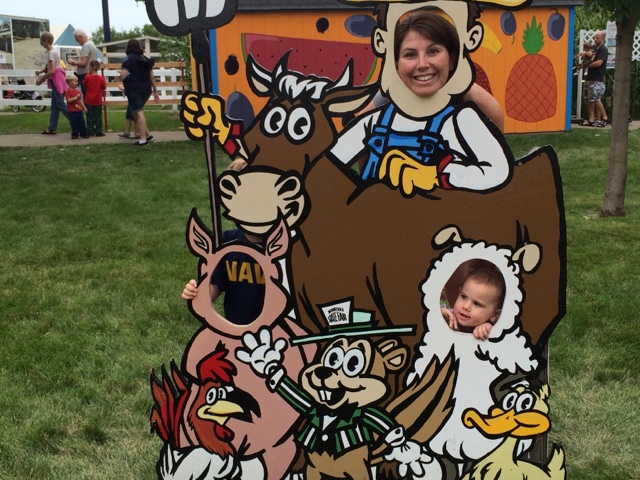 Emma was a little disappointed when the apple she picked wasn't real. 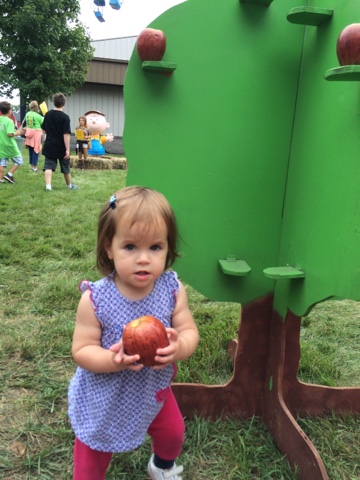 Luckily she was able to trade her fake apple in for a 'farm buck' and buy a real Apple. Happy now! 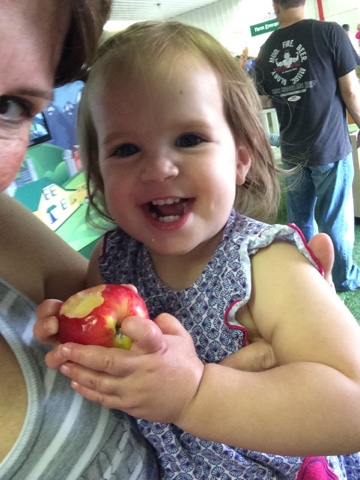 Isaac doesn't quite cooperate with pictures these days, as you can see. But when it's his idea he is pretty cute. He saw this duck and asked "take a picture of me with the big yellow duck" 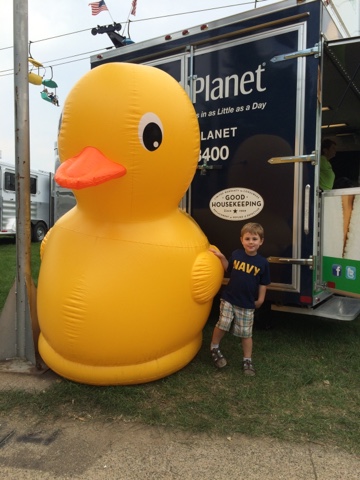 We walked by the butterfly house and and got to watch a whole wall of cocoons and freshly emerged butterfly's. Pretty amazing. 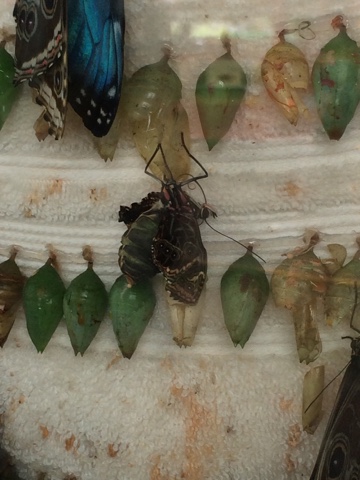 Couldn't come to the fair without getting cheese curds. 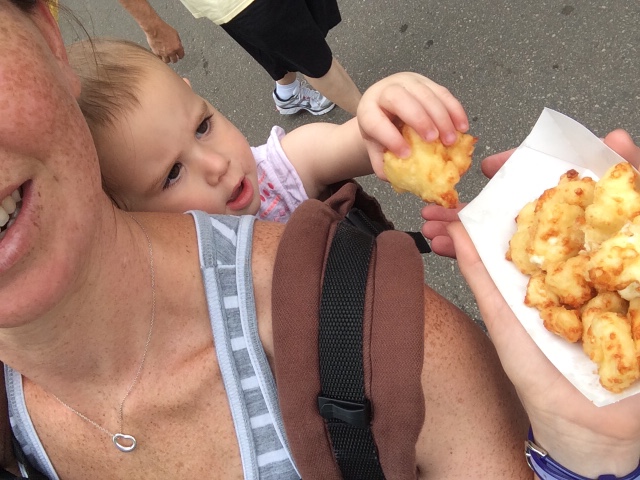 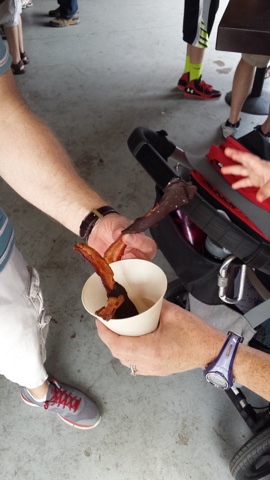 After the DNR building we stopped at the Kare 11 barn for a smashed penny. I have a large collection from all over the country. Last time I got one Isaac expressed interest in having his own collection so we have begun his. 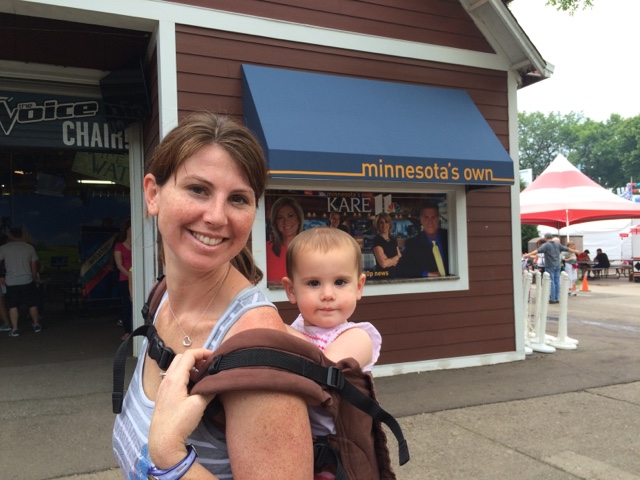 We headed for the animal barns next. Seeing the sheep, bunnies, & horses. Then stopping for some mediocre strawberry shortcake. 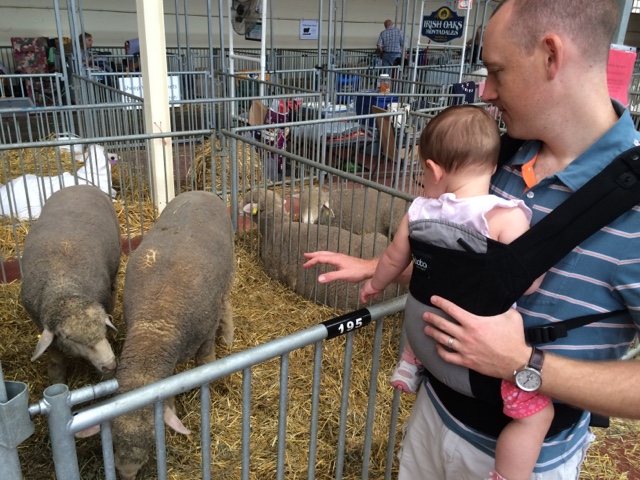 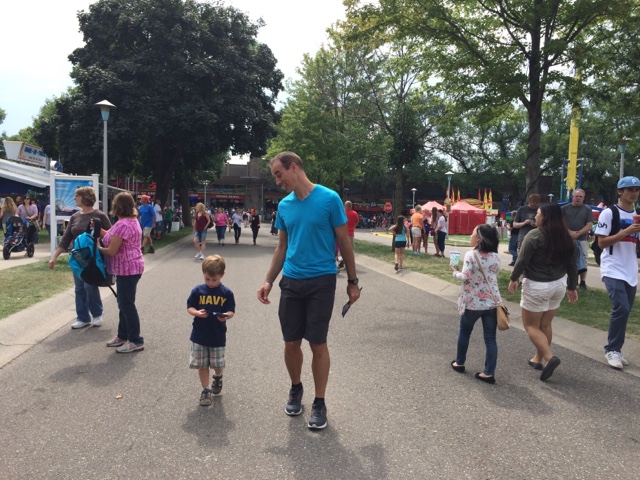 Isaac being a giant gummy bear on a stick. 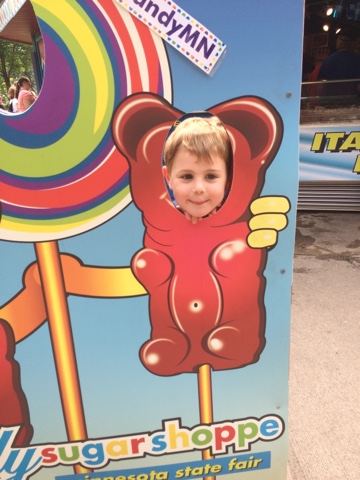 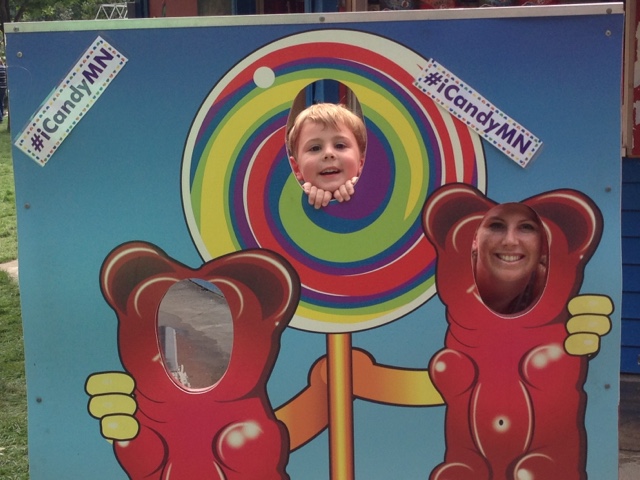 Isaac really wanted to ride a ride so we did the giant slide! He was a little afraid during it but wanted to do it again when we were finished. 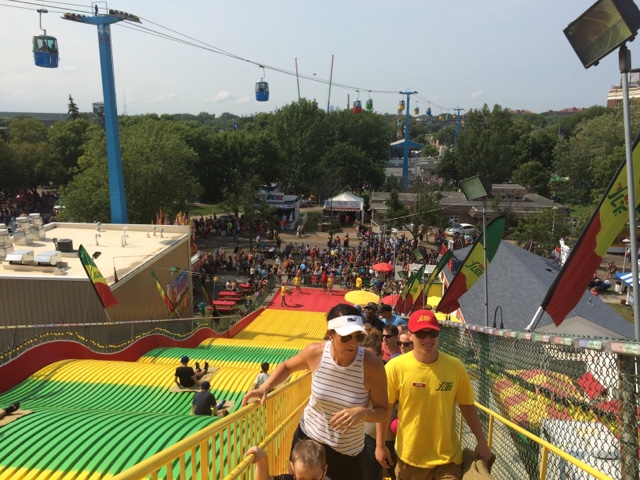 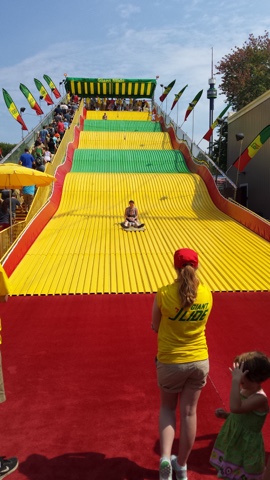 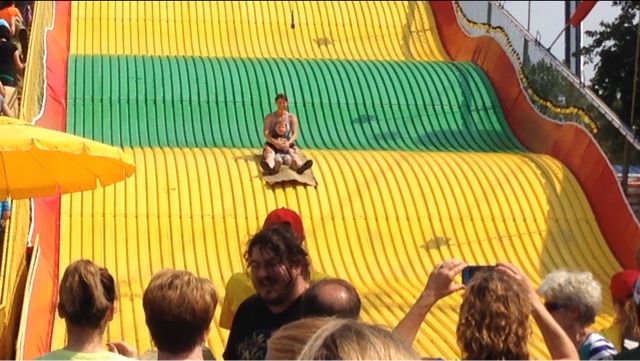 Next we were pretty much done and worked our way back toward our gate to exit. One of the babywearing groups I am in was having a fair scavenger hunt and I was suppose to get photos of us wearing the babies in various places. Some were the above photos. Also in front of the space needle: 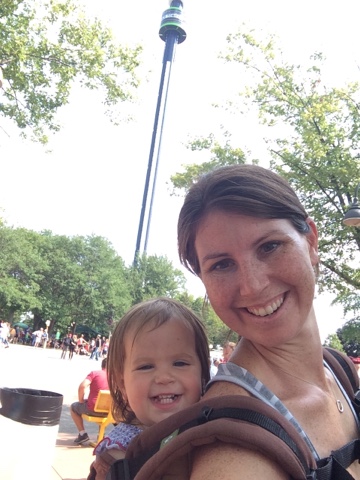 And with the babywearing statue: 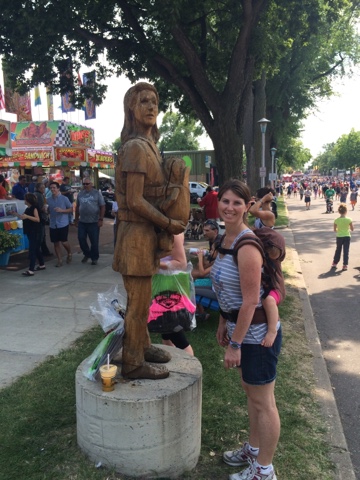 Both girls took a nap before we left 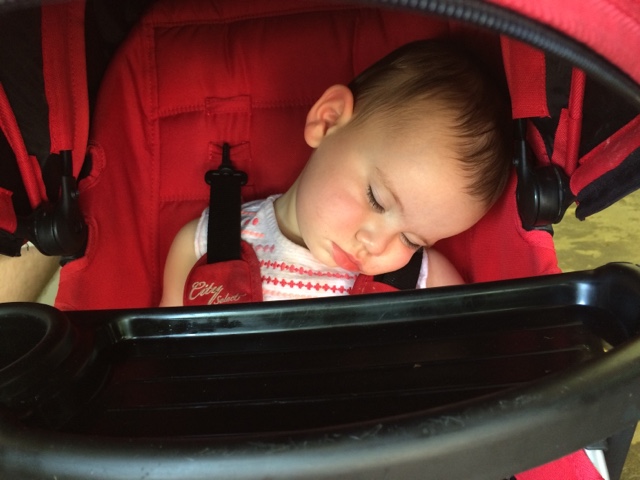 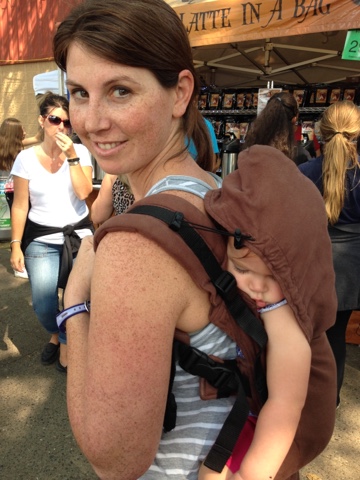