This past month seemed to have flown by. Can't believe the girls are almost a year and a half! They for sure know what the blocks mean and they know that once we get a photo they can play with the blocks. haha Here they are sitting all nice and pretty waiting to unstack their blocks. 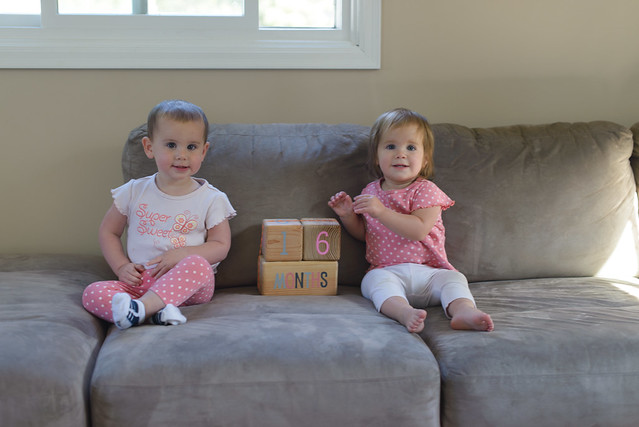 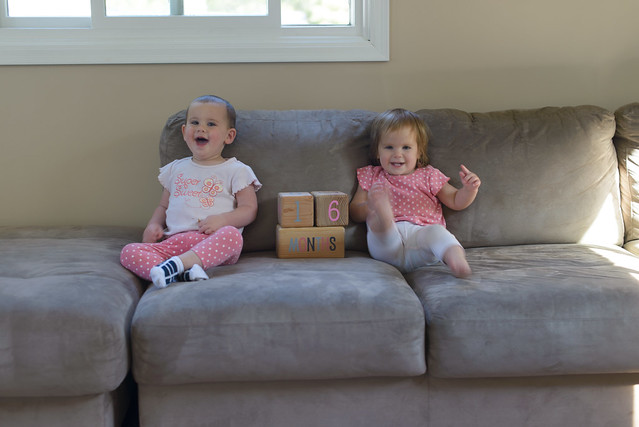 Emma ready to play with the blocks 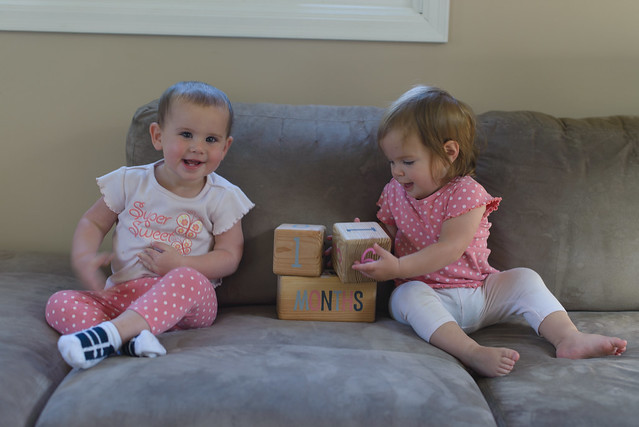 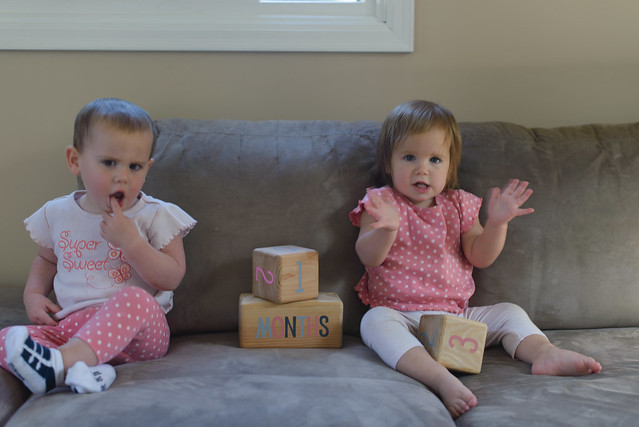 And Emma being grumpy when I set them back up. Attempted individual photos but this was all I got. 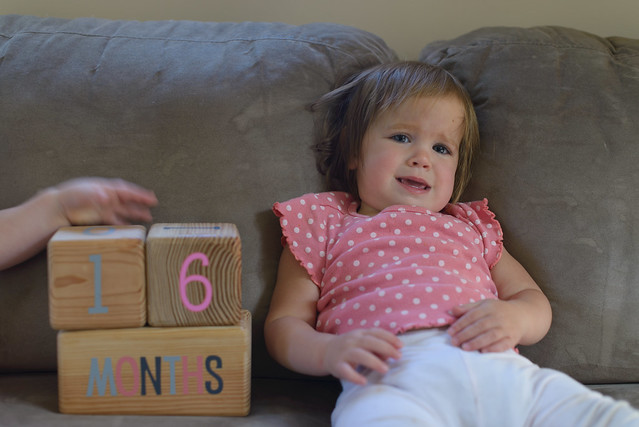 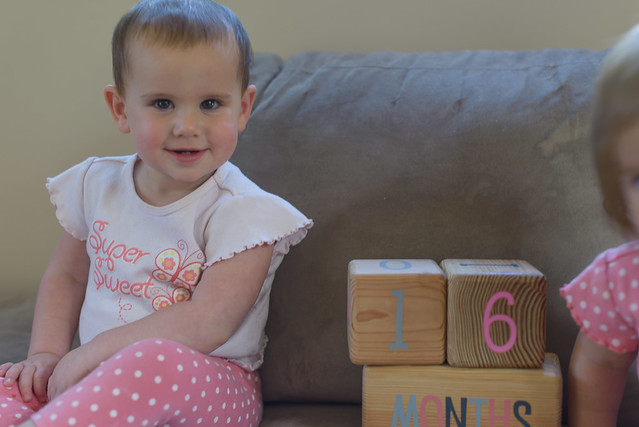 Emma has been chatting up a storm. She loves to talk and pretend that everything is a photo. Last weekend we were in La Crosse for apple weekend and she got a hold of Kyle's phone, put it to her ear and was pacing the room just chattering on and on. It was so cute! Here is a video of her saying "Sit down"


Mary must of gotten jealous of me taking videos of Emma talking because she started talking recently too. She is very matter-of-fact and will often shout what she is saying. Mary loves slides and has become quite the adventurous one on the playground. She is also getting another tooth which I expect to pop through any day now. That would make her count to five. (Emma is still at 12 and has been for quite a while) Mary has also figured out how to climb the gate at the bottom of the stairs. We thought at first she was knocking it over and climbing on it slanted, but then we caught her climbing over it as it stood straight up. It's not a huge concern as it was just there to keep them off the stairs when they were unstable. They are pretty good climbers up and down now so it's not as worrisome, just helps to block it off so they don't sneak up there and I can't find one. That twin thing... keeping track of two curious babies.

Emma loves her blankie and has started to pull it out of her crib and carry it around the house. She is very snuggly. She also likes to throw temper tantrums and bangs her head or throws herself on the floor when she doesn't get what she wants. Very fun... Most of the times she is in a good mood and a real sweetie, while every once in a while she wakes up on the wrong side of the bed and is grumpy. Kinda reminds me of myself, oh boy!

Here's Emma snuggling with a wrap in the wagon on the way home from the park yesterday: 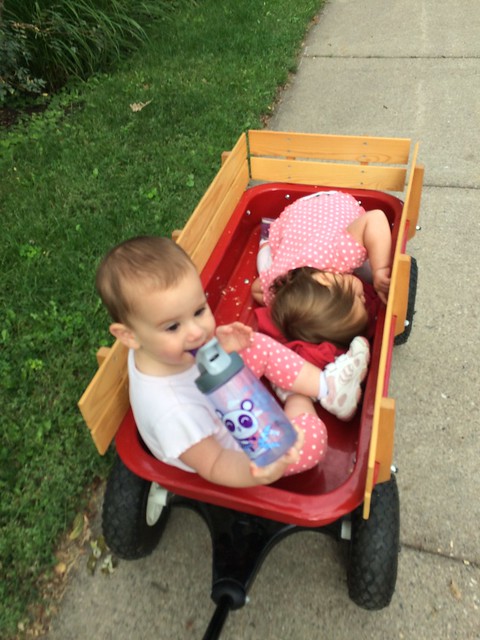 The girls have started to fight over things, which is also quite fun. Luckily it is short lived. They love playing with play-dough with Isaac and being included in anything. Mary often wakes up first from nap and if the others are sleeping she will go from room to room to wake Emma up first and then Isaac. We got Isaac a little contraption that hooks on his door so he can shut it and it will stay cracked but lock and he can unlock it. He likes to be able to close the girls out of his room if he doesn't feel like playing with them. Most times he does like them to come in there. 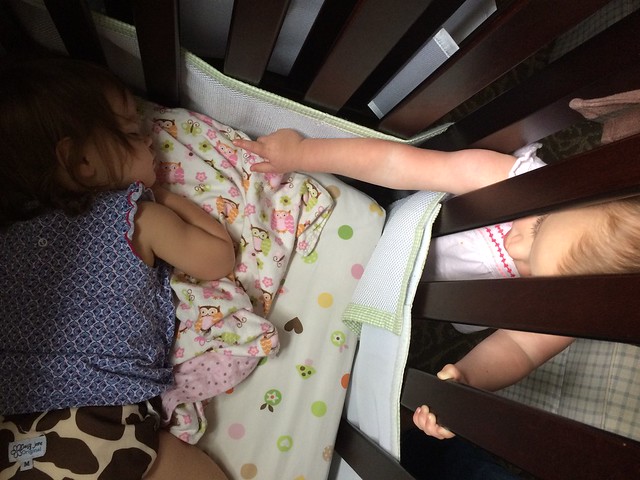 They also like hiding things around the house. Their favorite spot is this cabinet in the kitchen: 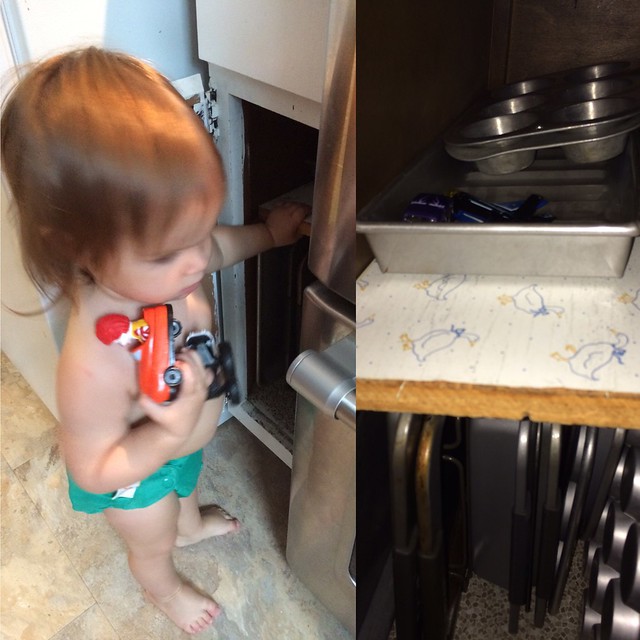 Their interest in books has also picked up in the past month or so; which is so fun. They will finally both sit and let us read to them. Mary has been into books for a while, but Emma wouldn't really let us sit and read until recently. Emma definitely has her favorites and if it's not one she likes she wiggles and pushes the book away. 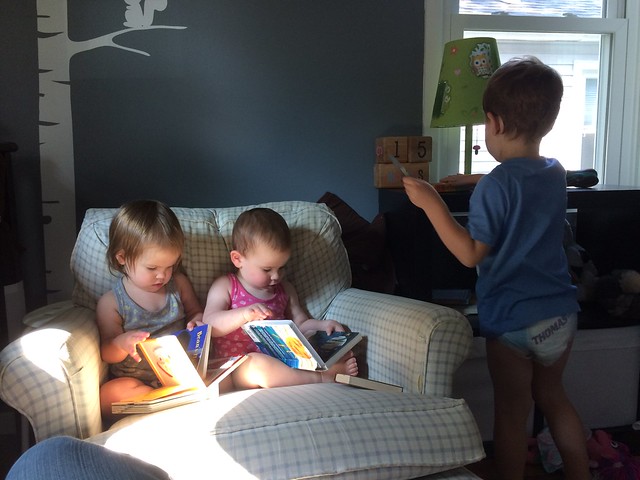