When my brother was visiting, we got a new front light installed. I didn't take before or after photos, but the old light was small and broken. The actual bulb was hanging down and was unsightly. I also wanted something we could leave turned on but would turn off at dawn and on at dusk. This is an LED light I got at Costco that does just that! Only complaint is it turns on at dark not necessarily dusk. I wish it'd turn on a little earlier than it does. But other than that I'm really happy with the light.

In doing the light, we took the house numbers down. We wanted to move them but didn't have the right drill bit to go into the stucco. So I whipped up some numbers on my silhouette to put on the mailbox. These are just temporary because I'm not happy with them. We are eventually getting the house re-dashed so we'll figure out something when that time comes early next spring.

Back during the first week of July, ya know that week of craziness as we prepare to birth a baby. The Wednesday of that week we woke up to our kitchen light filled with water: photo below. 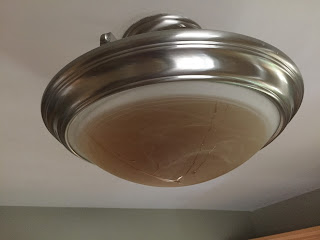 We didn't know the cause. But got it dried out and taken down. Left it for a week and then when nothing happened, Kyle got the light put back up with the help of our postpartum doula after Thomas was here. It was also our PPdoula that suggested it might have been the tile bathroom floor above that was leaking. We figured this HAD to be it because the kids had bathed the night before mainly unsupervised because of the craziness that was happening and must have splashed all over the floor. Okay so we were thinking we'd need to get the tile grout looked at. Well a week or so later it happened AGAIN! But this time the kids had not bathed the night before and we knew this because the night before was swim night and we have them shower at the gym after swim. Both times it happened it was after rain. After more looking the gutters were full and the gutter above the flat roof was bent a little and would just gush down in the middle just to the left of the balcony door. So we figured that had to be it, the roof leaking. So we called our stucco people and they took a look. It was still quite a mystery because he was thinking he had to be the bathroom but we knew it wasn't because we had ran water for a long time, and there was still no water. And we actually had no more leaks after we cleaned the gutters and bent up the spot in the droopy gutter. So paying thousands of dollars to fix a mystery problem wasn't not the funnest thing, but we needed to do something because having water pour down from your kitchen light fixture is not a good thing.

Fast forward to this week, (after signing papers a couple months ago) the guys show up to get it fixed. He even said the roof looked good, which was not what we wanted to hear. Luckily (for our sake of paying for this work) they did find water intrusion under the tar-mat. Here you can see the spots in the wood. They guessed it had been seeping through near the balcony door and running down along the edge. 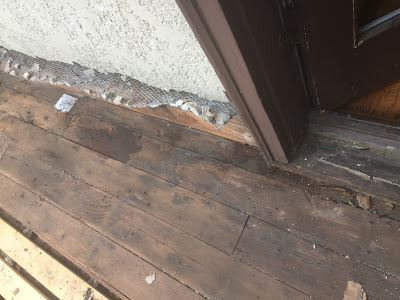 They replaced some boards 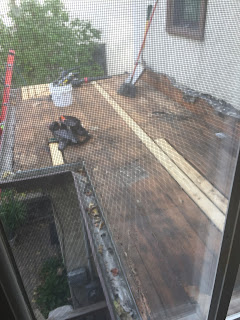 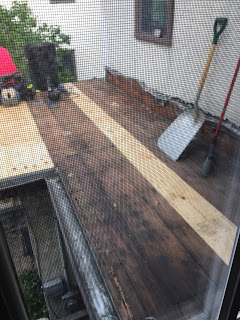 Got a new roof on 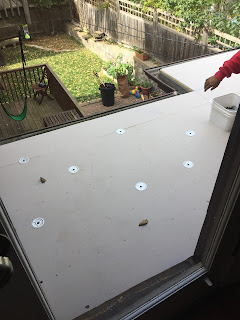 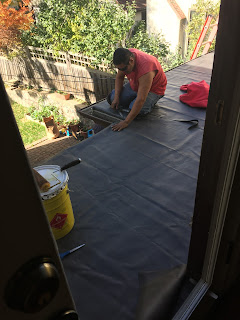 And got it all sealed up so we 'hopefully' will have no more mysterious water leaks or pools of water in our light fixtures!

Fast forward to last week, it snowed a little then melted and we had some trickles in the light!!!! They came to patch up the stucco a few days later and the downspout was off. He put that back into place and hopefully that was the water issue. But we'll keep an eye on it and be in touch with them if it still happens. They can maybe tear into the wall from the outside next spring when they re-dash the house. Because tearing into the ceiling from the inside would just be a mess.