At the first of November, Kyle drove the Subaru down to Missouri for his grandfather's funeral. As he pulled into his mom's house the Subaru was making a terrible sound. He took it in the next morning before the funeral to get it looked at. Turns out it was the ball bearing in the drive shaft and was going to take 3 days or so for the part to come in... this was bad news since he had planned to drive home that evening. He did end up coming home that night but he drove his dad's car. Then Friday after the Subaru was fixed he drove down to meet his dad and mom in Des Moines to switch cars.

He had already done some test driving Wednesday that week and I did some Friday so he decided to purchase on Saturday. We had already talked about trading in the Subaru prior to that road trip because it was getting older and we didn't want to be pouring money into it to fix it.

Pretty excited about the new ride. It's Kyle's work commuter as well as my commuter and we so far only have the booster in it, but have a car seat we can put in it, cuz the girls love riding with daddy or going on solo trips in the other car. 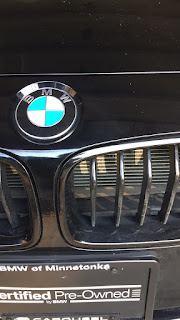