I've been able to get lots more unpacking done the past few days. Living out of and around boxes is really getting old so that was my motivation to get them out of our living space. As of now (Friday night) we have a couple little boxes on the dining table, a few in the dining room, one in the living room of wall stuff and a couple in our bedroom. Other than that they are all in the basement which is stuff that isn't super important to get out right away anyway and needs a little more thought and organization. Or not... Maybe some of it never needs to come out of the box and in that case I'll prob just pitch it in a year :-P
I had a gal come yesterday to pick up some boxes so today I drug them all out to our driveway in the alley and posted a curb alert on Craigslist. A few hours later every bit of it was gone except the TV boxes. Whoo hoo! 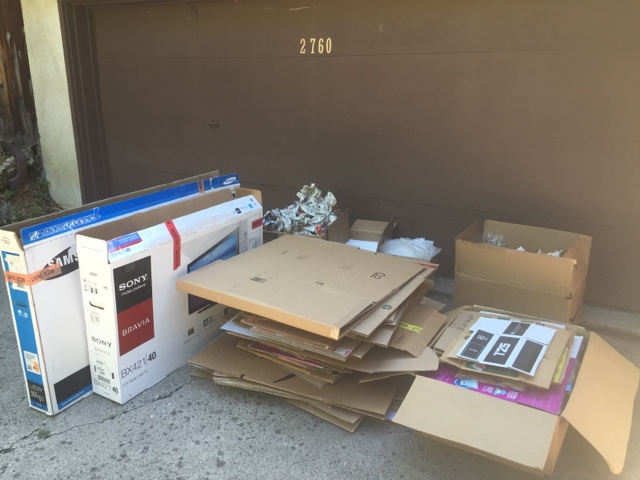 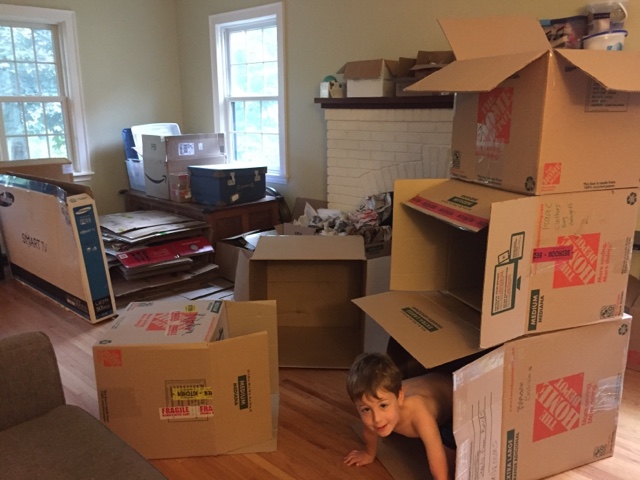 Rugs!!
Ventured out of our comfort zone for a fun lilac rug in the kitchen. 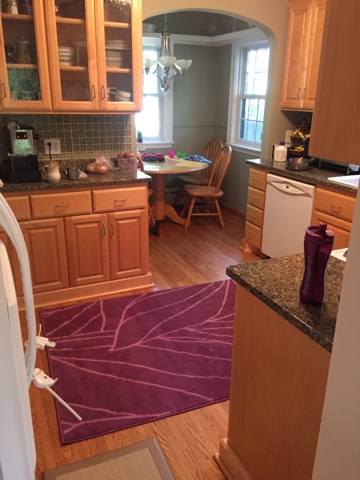 Now with the living room cleared out we could roll out the rug we picked up at Costco earlier in the week. We had a safe neutral picked out but then Kyle and I decided we both wanted to go with this one instead. $99 for a new rug, yes please. 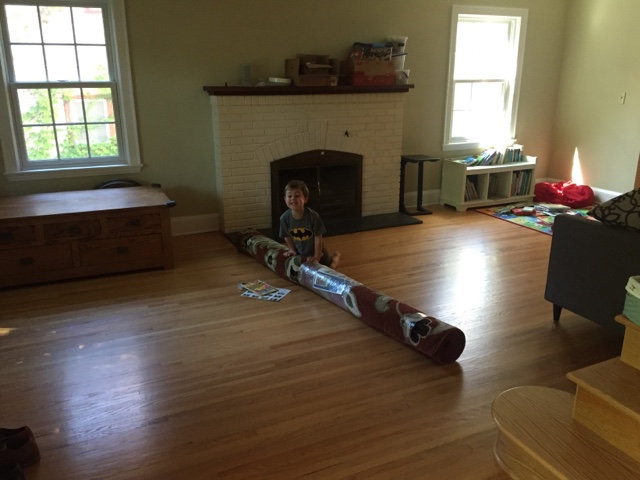 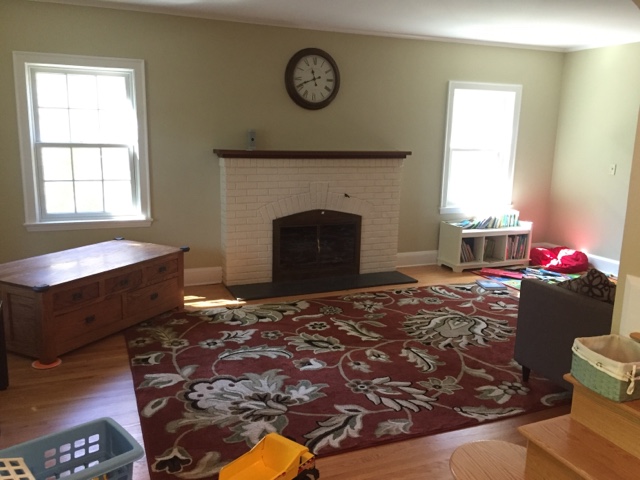 Miss Mary being silly on the moving men. 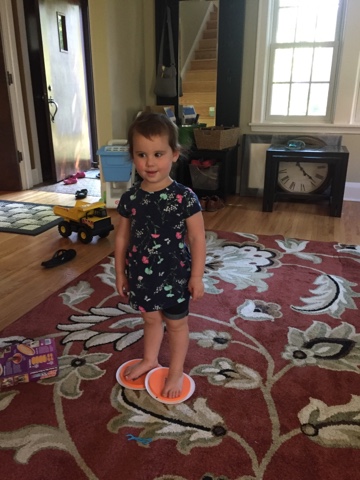 I got the girls down for nap today just in time for the stucco guy to arrive to give us a bid on the exterior of the house.
Once he left I was in mad dash mode to organize and unpack all the toys while the girls were out of the picture.
I got them all sorted out into three bins which will be our rotation toys. I did this before but had a list and would pull out certain items from a big toy box. It is going to be so nice just having them in bins and putting away and pulling out a new bin. No more sorting through a list. I like to have a toy from various developmental categories: music, sorting, manipulatives, animals, science, imaginative, etc. 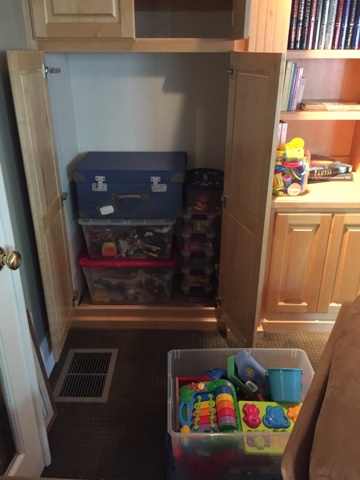 And since everything was tidy it was a perfect time to snap photos to share the play areas.
The library: 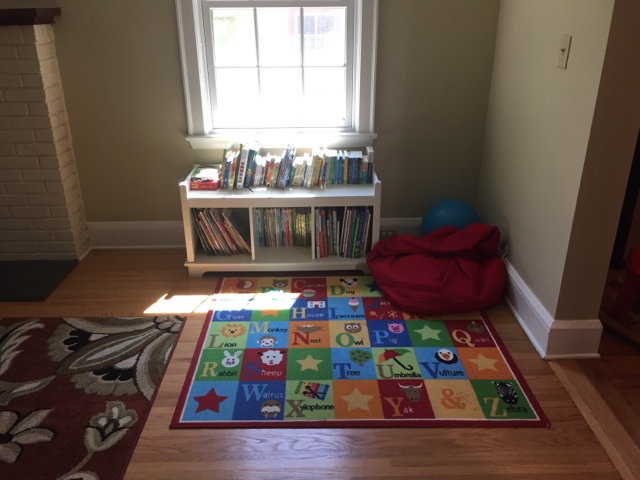 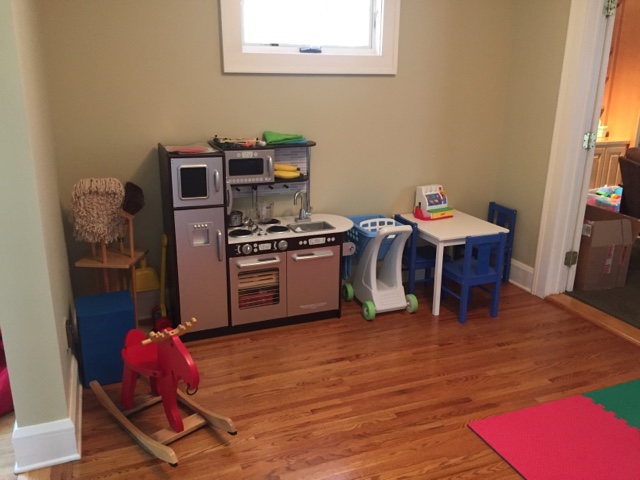 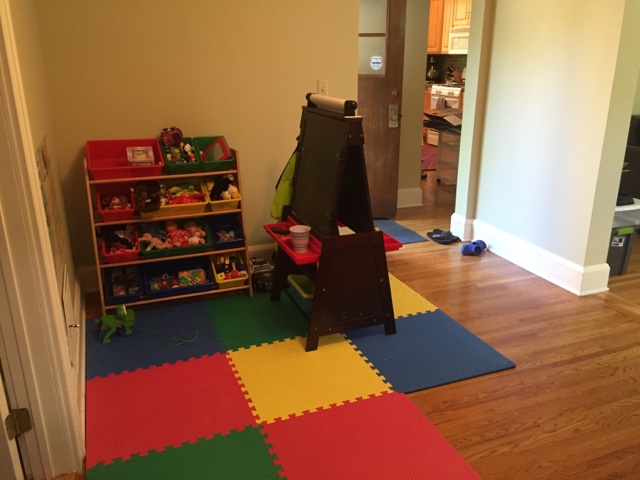 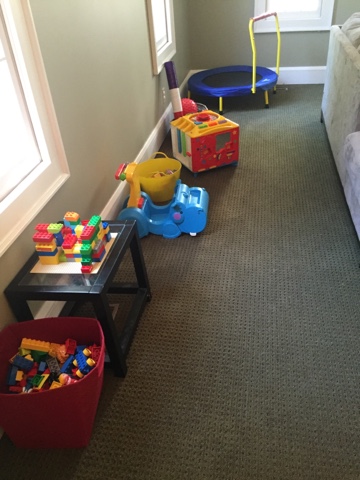 I also got the girls' dressor mounted to the wall and forgot to mention in my previous post that we cleaned out the dryer vent. Boy was it packed! The clothes weren't drying, not to mention a fire hazard. Clean now!!
posted at 7/22/2016 09:00:00 PM