Friday evening they were calling for storms. We got Isaac down at his normal time about 7:00 and he was sound asleep. We went downstairs to watch a movie I had reserved from the library. I finished up some stuff on the computer and Kyle popped the movie into the play station. The storm started so we decided to go upstairs and watch it. There was some heavy rain and high winds. We heard lots of popping then the electricity flickered. I went back downstairs to put something away and the power went off. It was 7:45pm at this point. Came back up and looked out the door and we watched the light rays of a transformer blow in the distance.
Well since watching our movie was off the agenda we just decided to go to bed and read by the light of book lights. It was still fairly light out. I was off and on Facebook and had heard possibly two hours for power restore. I wasn't too believing of this since it was still lightening outside. But a friend had asked if there were many trees down. I replied "not really a few branches in our yard and more in our neighbors" then I looked out our upstairs window and saw trees down and lots of people out and about on the next block over. So we decided to get out and take a walk for ourselves.
We had about 60mph winds and that mixed with super wet soil from all the rain we've had in the past month, so many of the trees just uprooted and fell over. Pretty crazy. 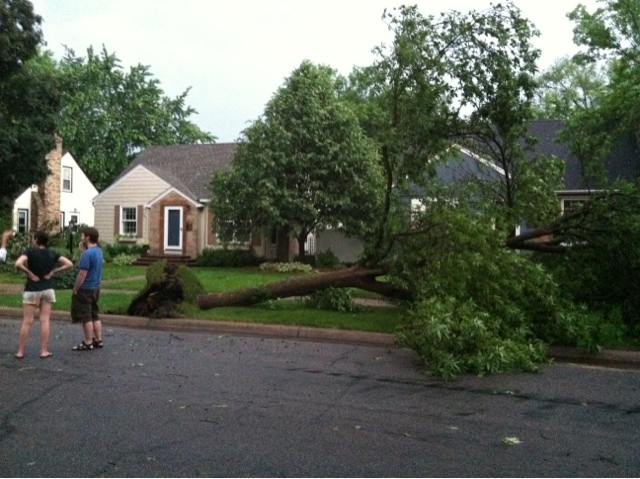 One tree fell on both this lady's cars! 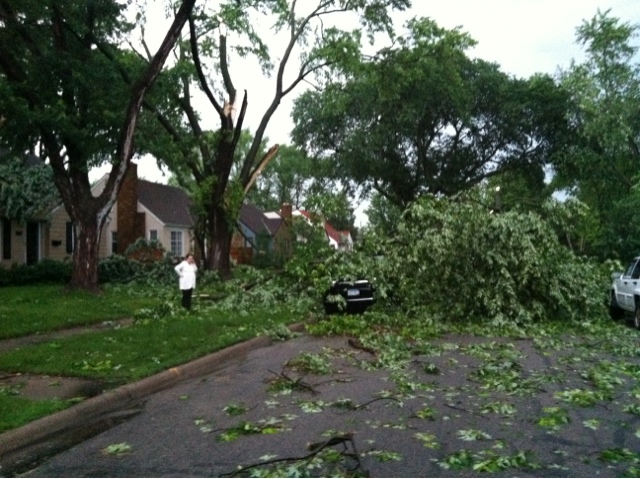 This is just 9 houses down on the same block and side of the road as us. Just from the high winds. 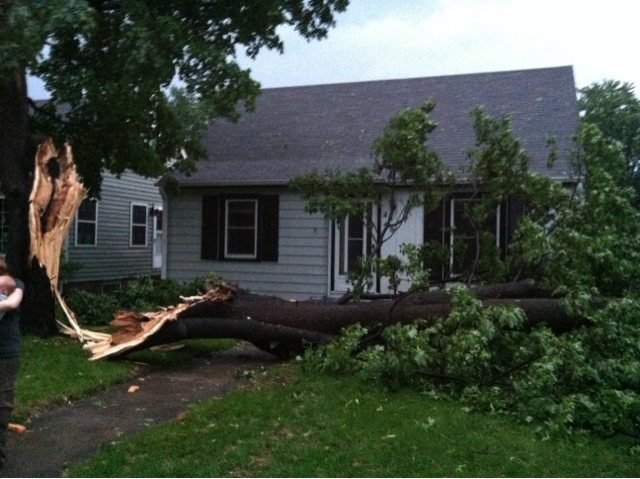 We visited with some neighbors and made our way back as the sky grew darker.
The next morning, still no power. We wanted to keep our freezer and fridge shut so we went out for breakfast. At this point we heard rumors that power could be out until Monday afternoon! We got to the garage then I realized after hitting the garage door opener twice that "duh, the electricity is out". So we had to manually snap the power line off the door to open it ourselves. Luckily this is easy and quick  but just an inconvenience.
Our fav breakfast place doesn't open til 9 so we tried another. Since Isaac decided to get up at 6. We drove through the neighborhood first seeing more of the damage. 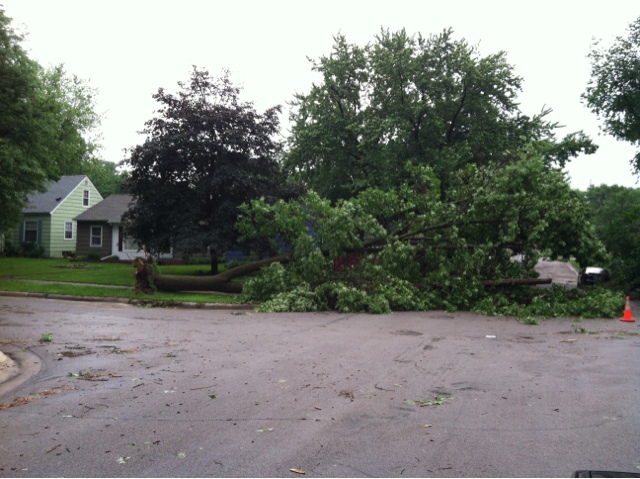 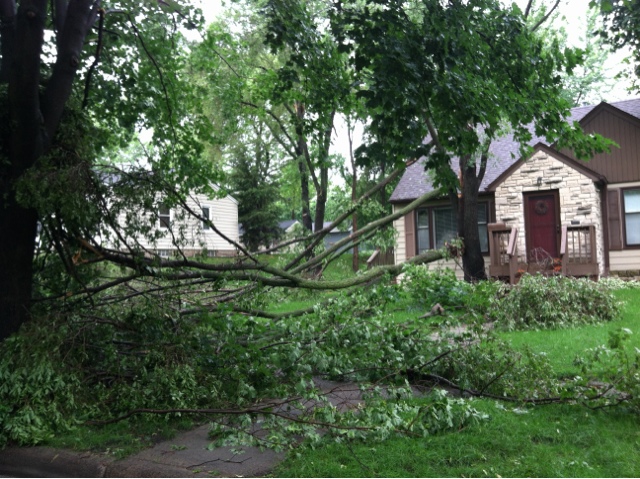 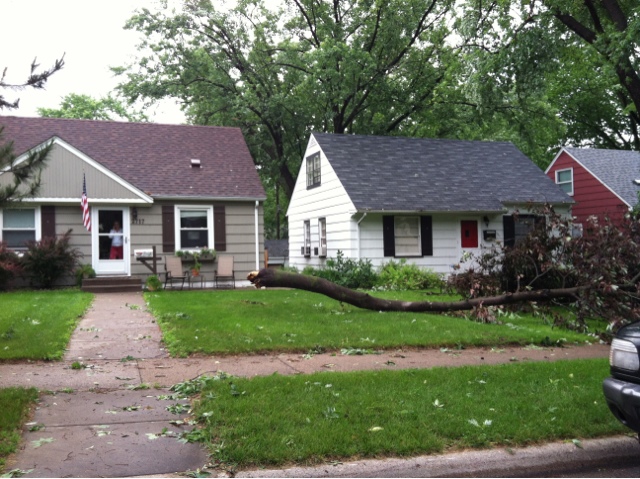 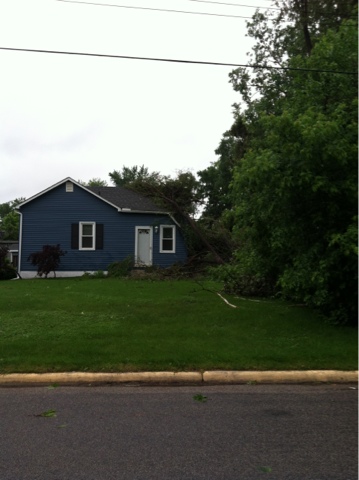 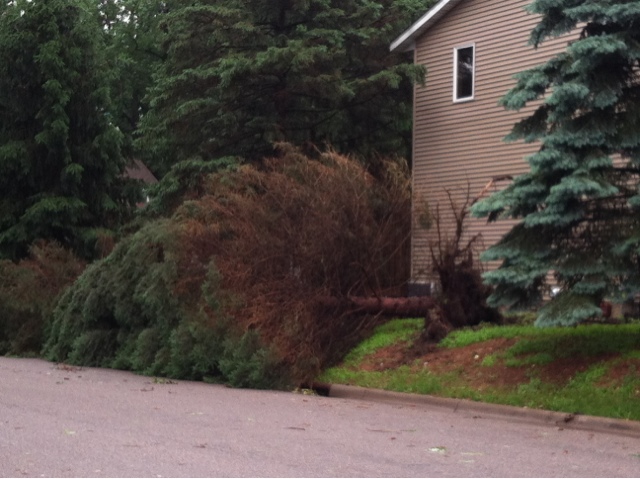 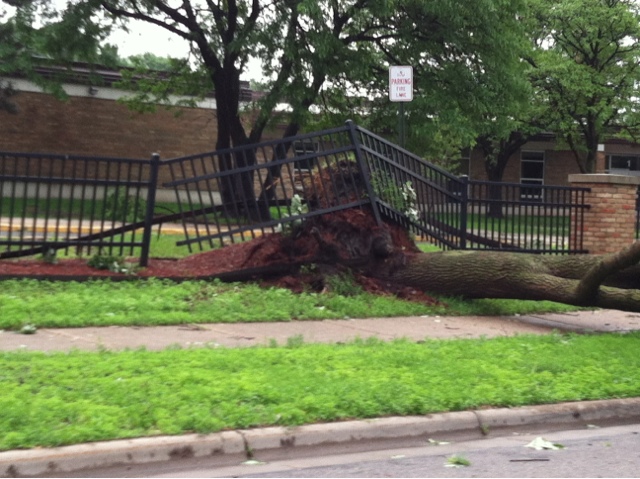 We past a Perkins on the way to our destination and it was closed due to no power. The place we went had an hour and a half wait so we decided I try our second go to in uptown: Bryant Lake Bowl. We hit some detours and closed roads along the way and finally got in there about 9. It was busy for 9 o'clock but only had about a 20 min wait. Ate our breakfast and was on our way.
We've been scouting out a couch at a local weekend outlet place for the past few months so decided to drop in since it opens at 10. And what do you know we found our couch! It's a sleeper sofa for the basement and will get delivered in a couple weeks. 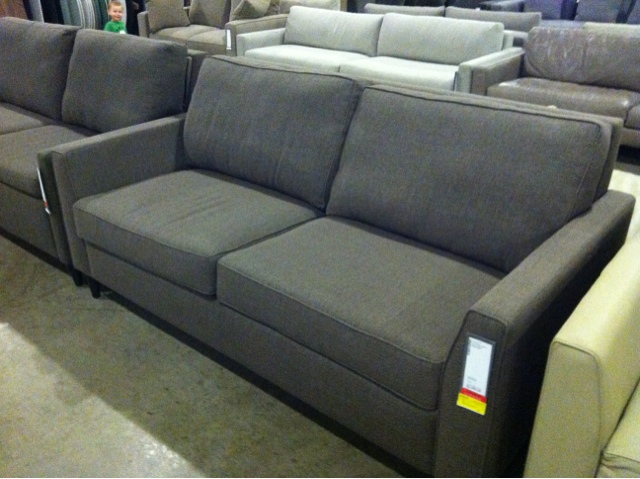 On the way home we drove around our neighborhood again hitting new roads. It was about 11:30 and we could already tell they had been busy clearing the trees from the roads. 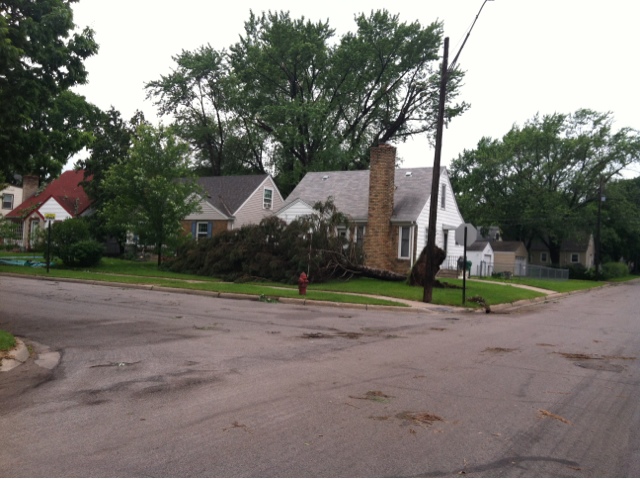 Our neighbor friends were out of town so I checked her house and alley. This is their alley and that tree is on their neighbor's house. Luckily no damage to theirs. 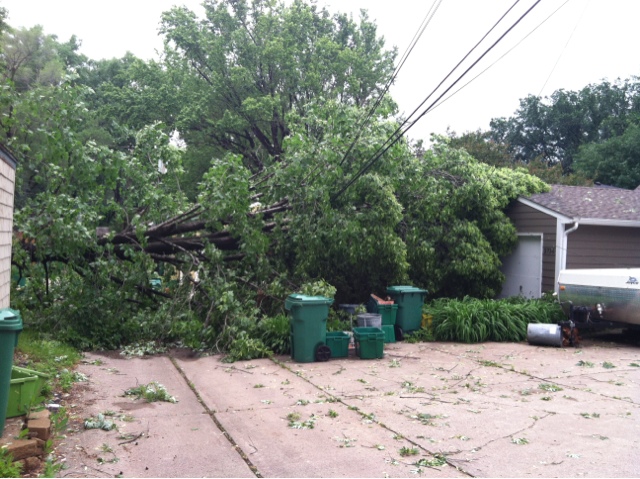 Well they didn't clear this one on Idaho. 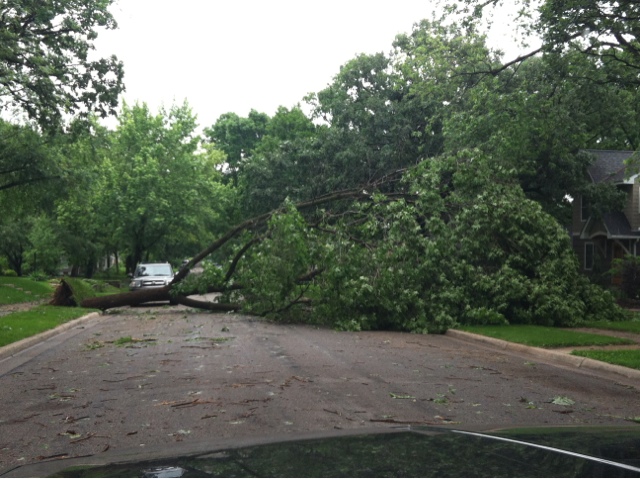 Isaac took a good nap. And we learned of some other friends in a few towns over (closer to our old apartment) had a tree fall on their house. They were also saying now restore might not be til Tuesday at noon.
So we drove up north to take a look at it. All the while debating what to do about our fridge and freezers. And if we should eat out for lunch or not. 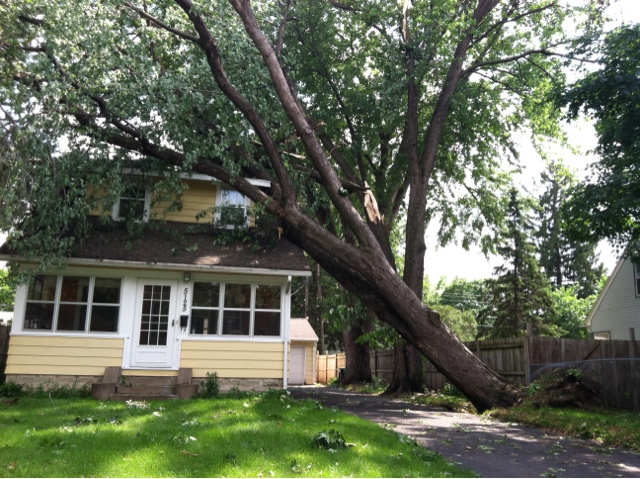 We decide to get some ice and head home. I was hopeful to see the street lights on Louisiana were up and running but no power at our house yet. We had some leftovers to eat, which I warmed up on the gas stove. We tried to eat a few more things. Placed ice in the fridge and freezer; moved our milk, eggs, cheese, cottage cheese, and whatever else fit into a small cooler and filled with ice. We were surprised to find the milk was warm (not hot, still chilled but not cold) and some freezer items had started to thaw. So we were worried about our deep freeze which we had heard: going unopened could stay cool anywhere from 48hrs-4 days. A friend had offered some of their freezer space up so I gave her a call to see what we could bring over.
We loaded up a laundry basket filled with frozen meat and such. Happy to find that the deep freeze was still very cold and all items were frozen solid. On our way to drop off the goods, a friend who lives 10 blocks west announced she had power! This gave me hope that we might come home later to power.
We then headed to another friend's house for a pizza party. They had power so it was nice of them to share their A/C with us. We brought over some fridge items to share and eat up and had a nice evening not focused on lost power. We have been keeping up with news/electricity updates via Facebook and twitter and the time frame now said everyone should be powered up by Wednesday!
We headed home about 9, still light enough to be able to put Isaac down. He was exited to be playing late and went down easy. I took Minnetonka home as I wanted to check Dakota's street light as if it was on then we'd have to have power. As we traveled east toward our house lights were on everywhere. We were so hopeful... But already knew this since my friend who lives west of us already told me her's was on. We got to Hampshire and the street light was on! People's houses were lite up, we got excited. We turned down the next street, our street, and black.... No lights, no hope. So another night without power. But it's close. Very close.
We took Isaac into bed, put the lock back in the garage door and sat on the front patio to write this blog (on my phone).
Hour 27 of no power......
posted at 6/22/2013 11:01:00 PM

The block north of us has power yesterday morning, but still nothing for us. But, I am not surprised. Our block is always the last to be back up! Hopefully you will be powered up soon!