Last Sunday we attended BooZoo at the Como Zoo. This is our third year attending (2014, 2013) and it's a fun way to spend another night in our costumes. You know me, I love going all out so when Isaac said he wanted to be a lion for Halloween I had to figure out how I could tie that into a family theme. My mom and I (mainly my mom) made a tornado costume back in 2006 when I was doing my internship in Kansas City. The hospital floor I was working at did a Wizard of Oz theme and with most of the costumes being spoken for I decided to be the tornado. So with that in mind I knew we could make this family theme work! When we were home in September I got the tornado costume from my mom and shopped/ordered the rest of the costumes online. I actually found Mary's scarecrow costume on craigslist, same with Isaac's. It's hard to find a small boy's size costume in the animals. That size starts to be all monsters, ninjas, and bad guys. I ordered Emma's tinman costume online and of course it was too big, luckily I was able to exchange it and it arrived just in time before the weekend. I finally was able to find a non-sexy Dorothy costume at a local Halloween store, but ended up returning it after trying it on at home and could barely fit my head through the neck hole. Was able to find same costume a little bigger at a different store for $10 cheaper! So after a few weeks of costume shuffle we finally had our ensemble! Oh I did alter Isaac's costume a bit, it was simba from the lion king but we wanted it to have a mane so I got some dark brown fabric and added that to the headpiece making it what you see here.

And since we were Wizard of Oz we had to fill Isaac in on the whole story. Instead of having him watch the movie, which could be a little scary I found a great book online and ordered it. It's a condensed version of the story with pictures from the movie. It was perfect and a few nights I was able to pull up video clips on YouTube and we'd watch the clips along with reading the story, so he could hear the songs. I think he'd be ready to watch the movie now that he knows what to expect. He actually likes the part with the wicked witch. His favorite part is the guy at the door of the emerald city. 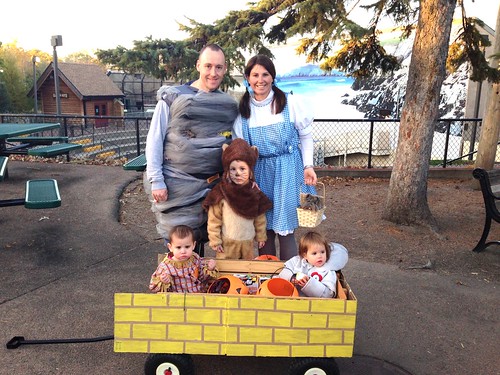 And for an added finishing touch Isaac and I painted some cardboard to turn our wagon into a yellow brick road. We were the talk of the night at BooZoo and had our picture taken by strangers a number of times :-P

We arrived just about when the gates opened at 4:30 and changed into our costumes by the van. I was hoping to get a photo of all three kids but that is pretty much impossible these days so single photos have to do. 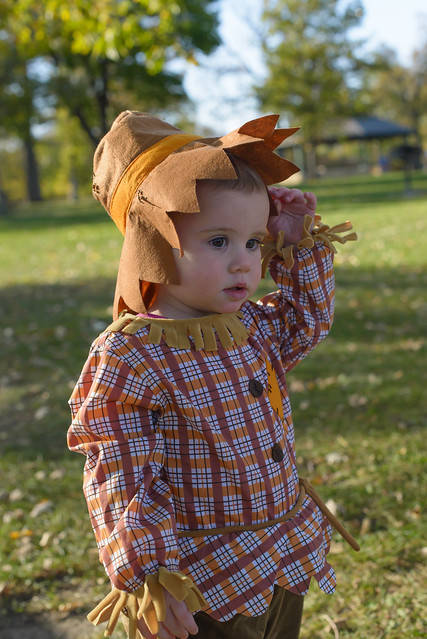 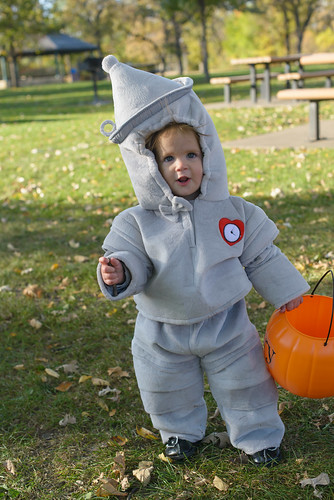 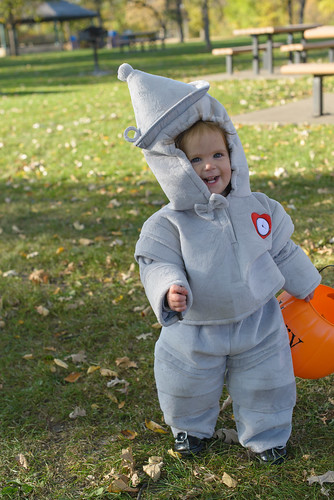 No idea what Isaac is doing here... 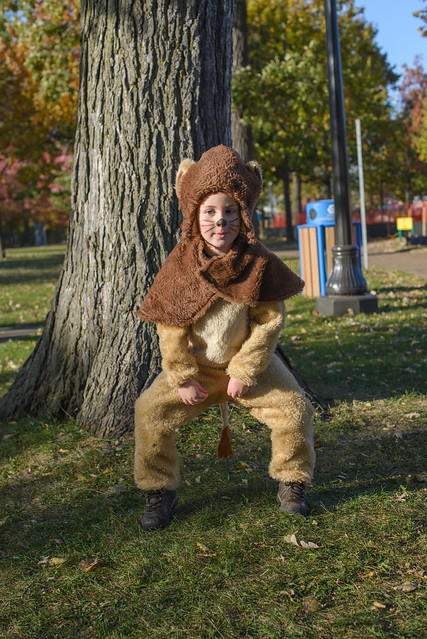 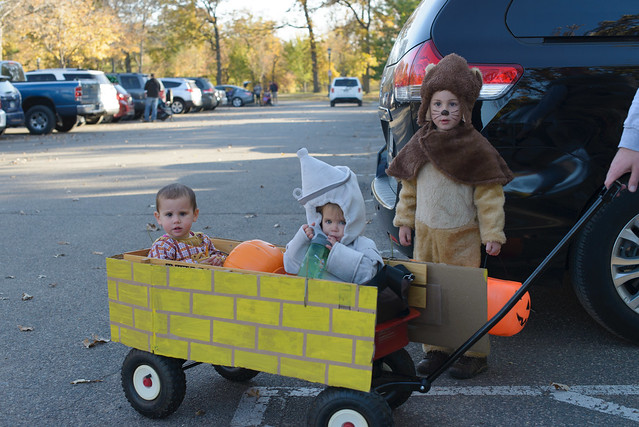 We had to wait in the long line again. Luckily unlike last year when we went on a Saturday night, the line wasn't quite as long. But the girls were not digging sitting in the wagon in the line. 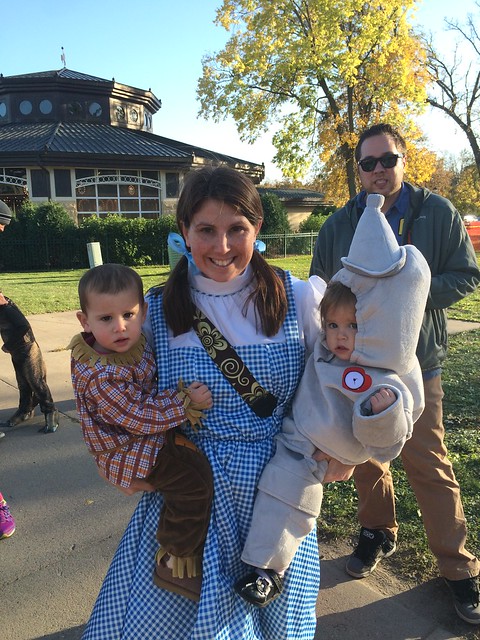 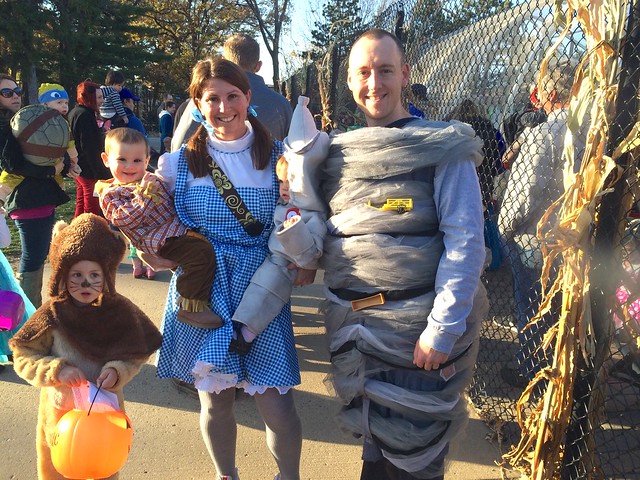 Once we got moving and they got to munch on goodies from their basket they were good. 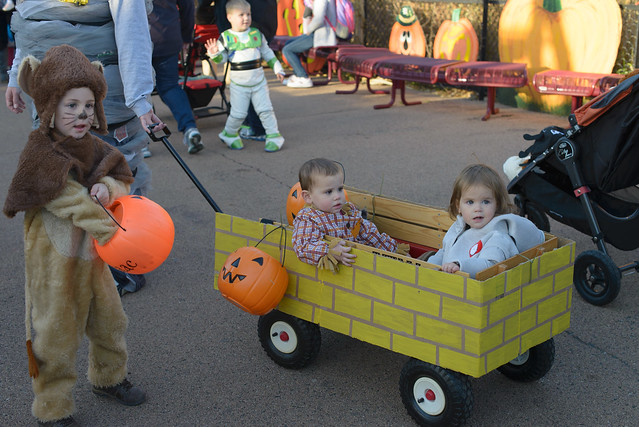 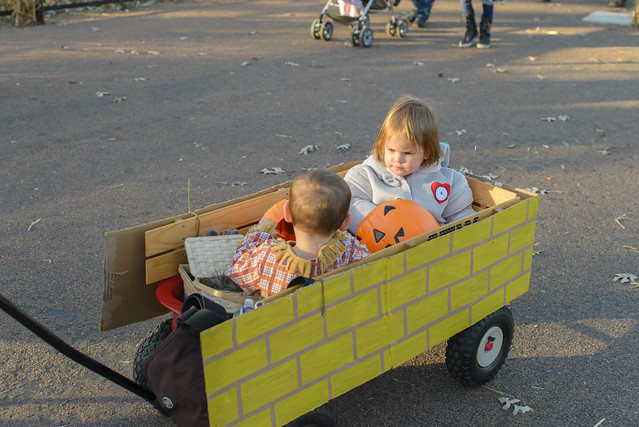 Attempt at all three again... you see how this ends up 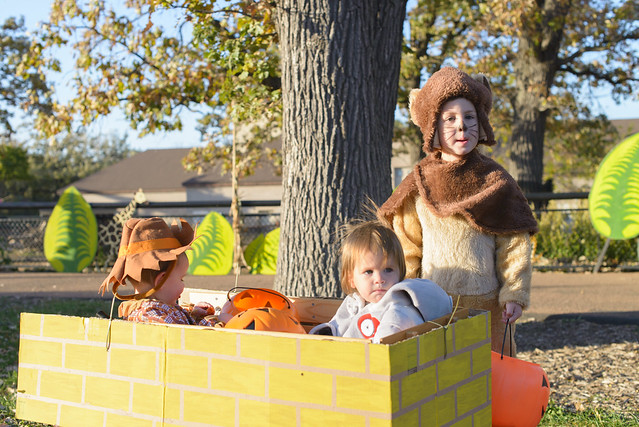 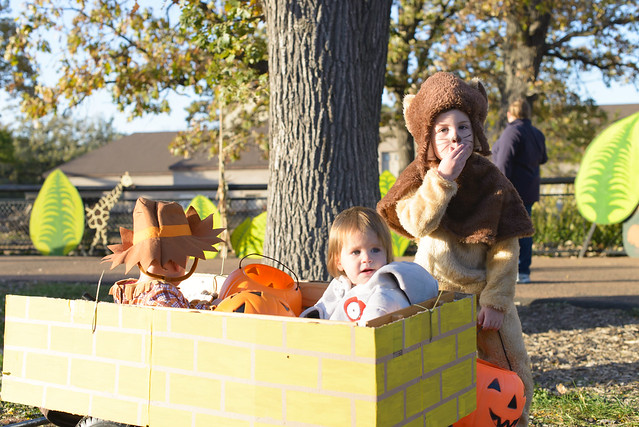 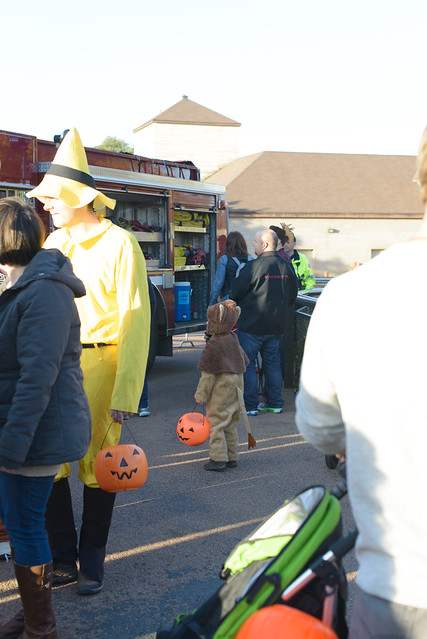 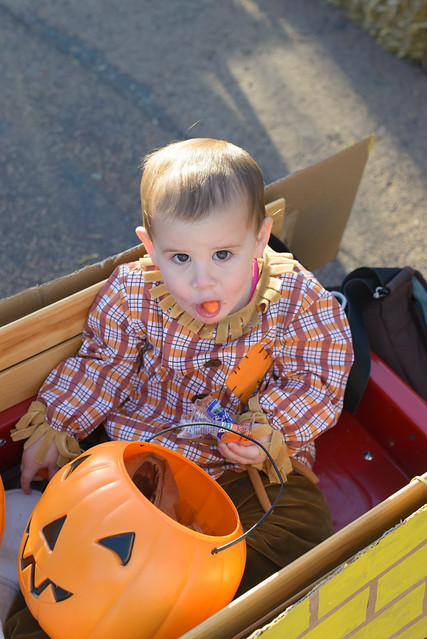 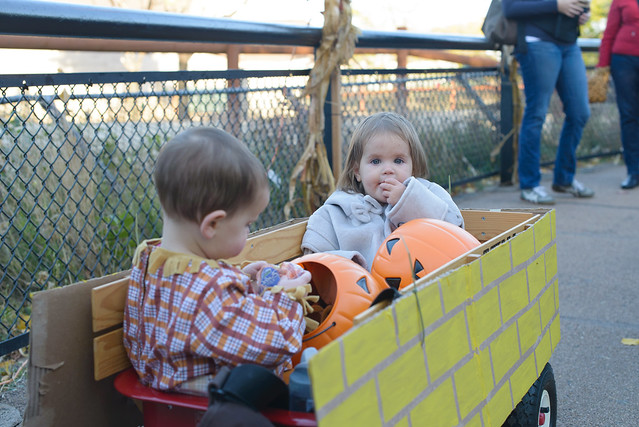 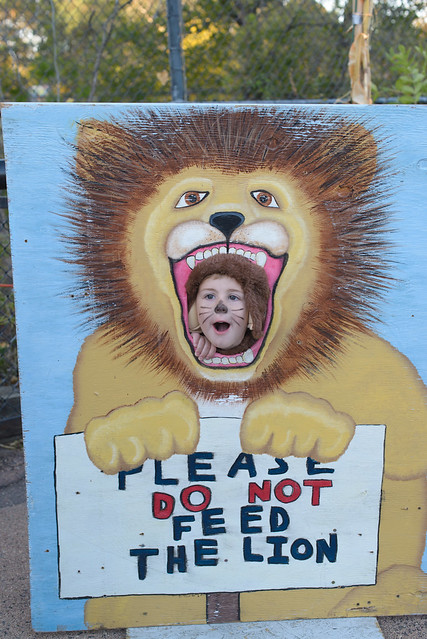 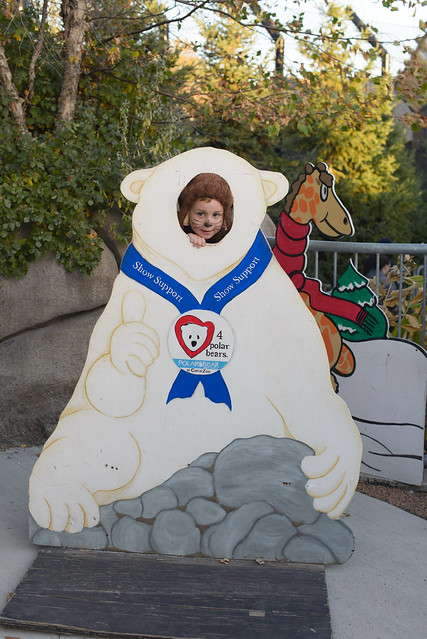 Moving onto the apple: 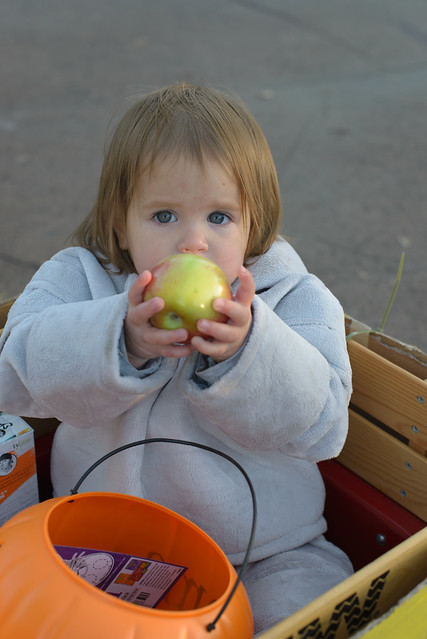 Emma kept handing it to me saying "UH!" (because that it their thing now, grunts and screeches to communicate) I kept telling her to take a bite then she hand it back with a screech saying "CUT IT UP FOR ME!" finally I took a bite and told her "See just eat it" that made sense to her and the rest is history. She ended up eating the ENTIRE thing minus two seeds I was able to pluck off her chin. 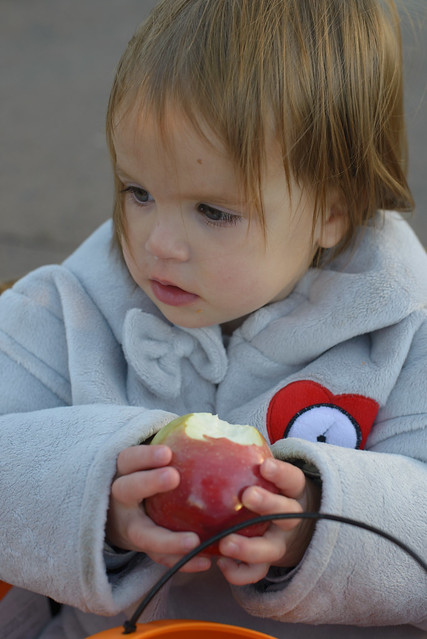 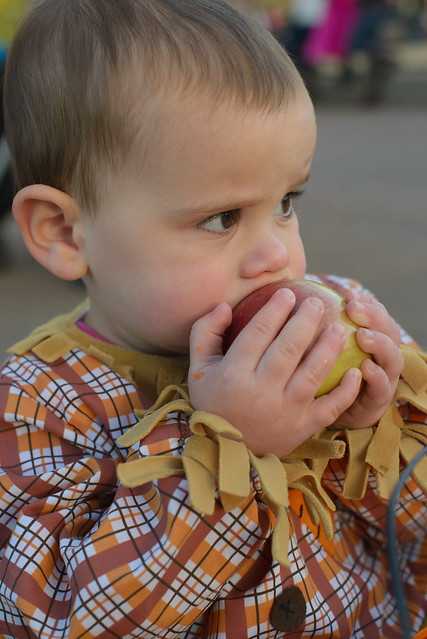 Stopping for a quick treat break 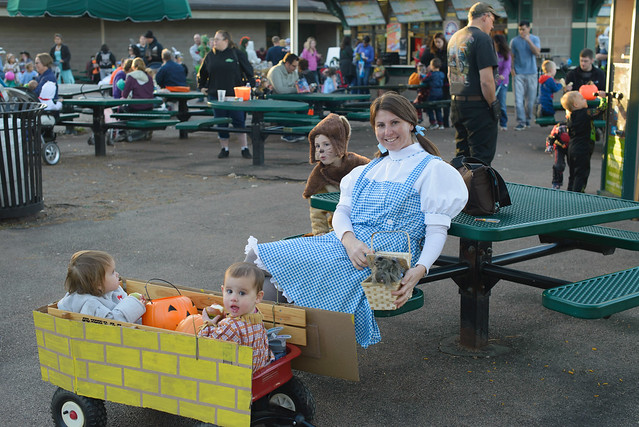 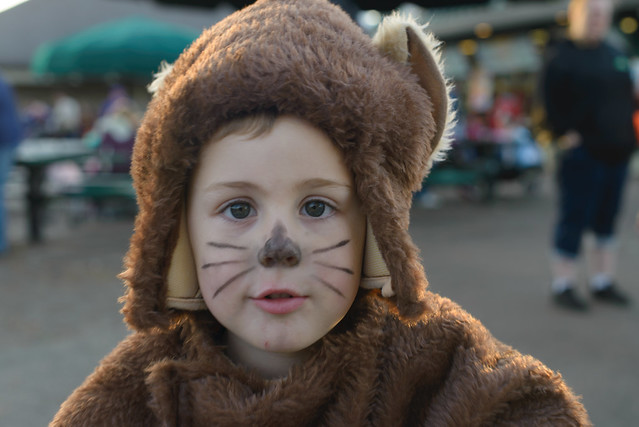 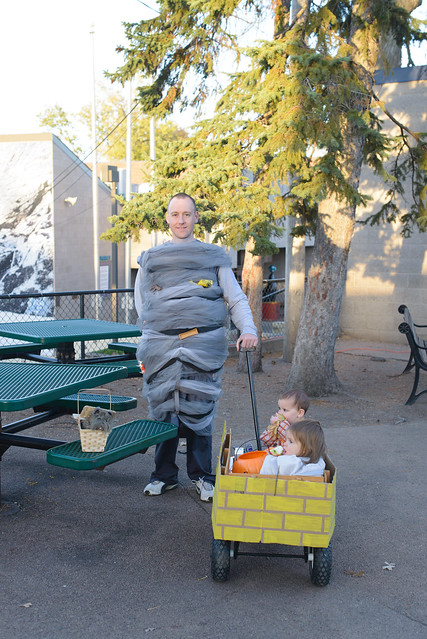 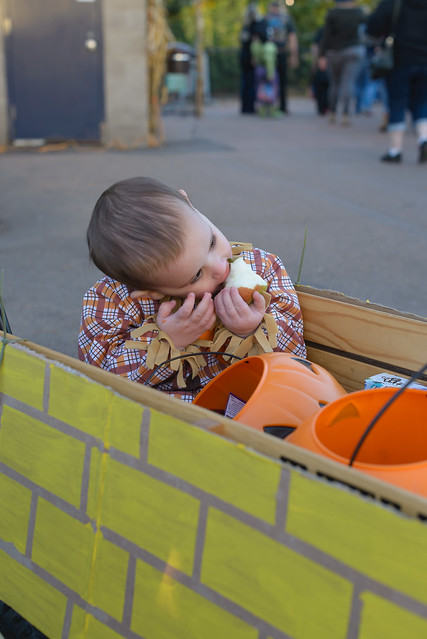 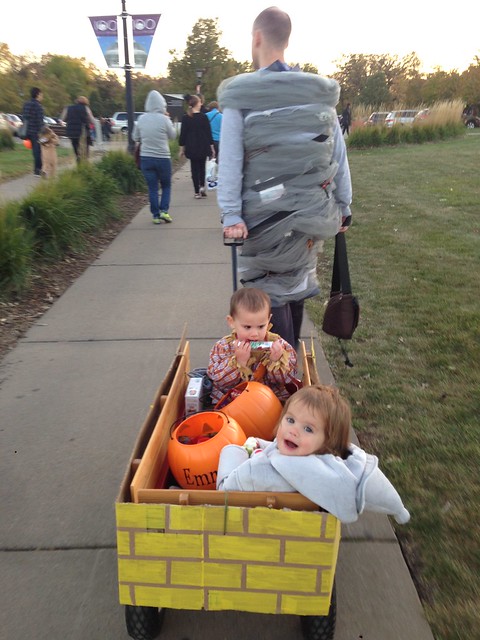 Email ThisBlogThis!Share to TwitterShare to FacebookShare to Pinterest
Tags: Halloween

What a great idea! I can't wait to see what you come up with in years to come! You are much more ambitious than I am. One kiddos costume is enough for me!

Not sure how long the kids will be on board for family themes, but I'll definitely continue to try :)