Kyle has been wanting to fix up our back room for quite a while and it was on our list of things to get done before selling the house (not that we are selling anytime soon) but instead of waiting til the last minute to do upgrades, we decided we would rather enjoy nice changes ourselves and not just do things to sell. So that was our reasoning for sooner rather than later. We got a bid a little over a month ago. Then one Wednesday afternoon I get an email stating "We have a gap in our schedule and would like to start your project Monday!" Whoa, what? Okay.... we figured it would be a headache no matter when it gets done so might as well get it done now. This happened to be two days before Kyle's folks were visiting. But luckily we were able to use their presence to help with kiddos so we could get furniture moved around to prepare for the workers to start on Monday. The project was 'suppose to take two weeks'... well here we are four weeks after and I finally have pictures to share and a blog to write. But we are SO happy it's finished and love our new updated space!

Our back family room was added on at some point, not sure when. There was yucky carpet that we had professionally cleaned when we moved in, a drop ceiling and if you remember my blog from 2008...(old blog showing ceiling) there was wood paneling on the walls that we puttied and painted over. No one really knew it was wood paneling but we did and we wanted to get rid of the hideous florescent light up above. While we had work being done we also decided to get a new kitchen floor and to tear out part of a wall and make a second doorway from the kitchen into the dining room to help with flow of traffic. We were always getting jammed up in the hallway while setting the table for dinner or trying to leave the house when guests were over. So hopefully this new change will help make the house feel bigger and provide another route for traffic.

So here are some of the BEFORE pictures. 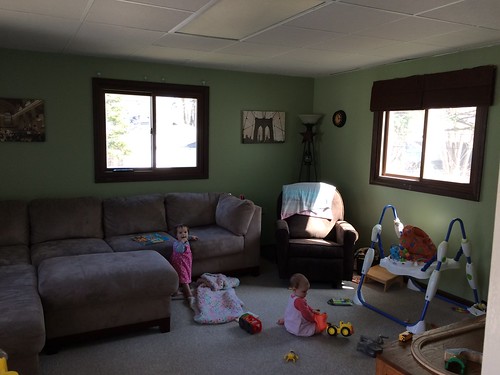 The kids loved the open space! 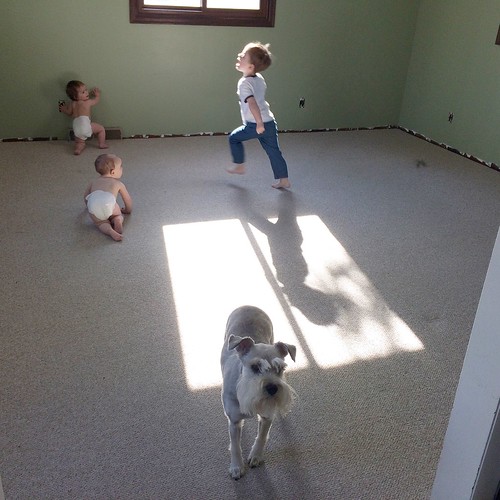 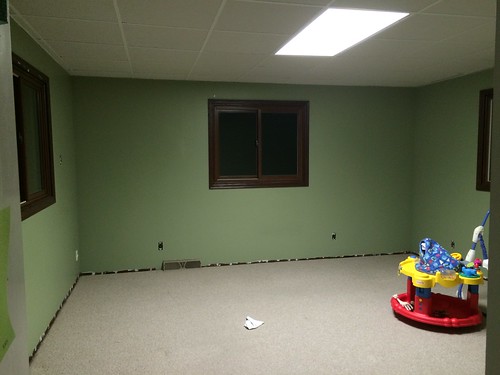 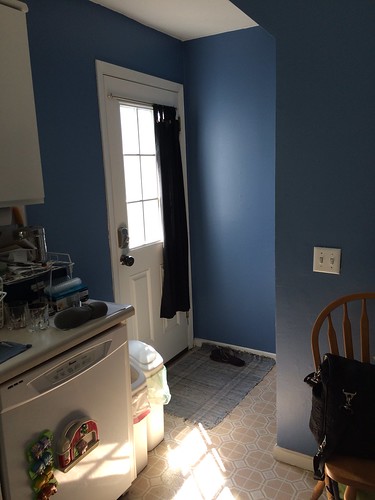 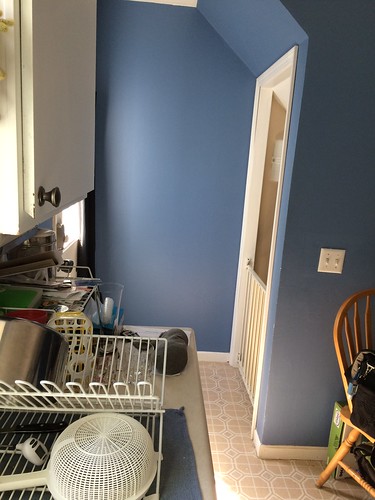 Dining room, already a mess as I had started clearing off the bookshelves at this point: 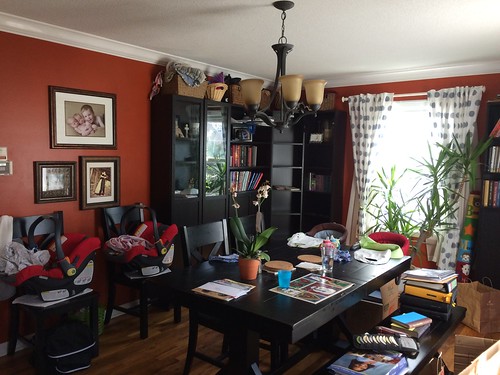 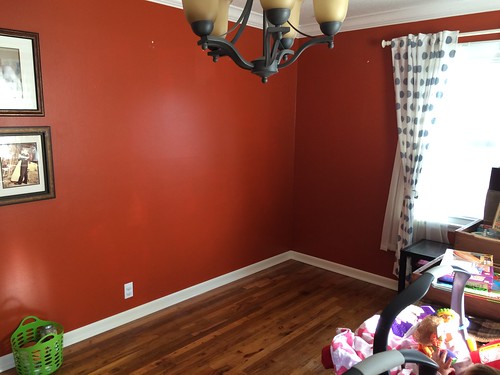 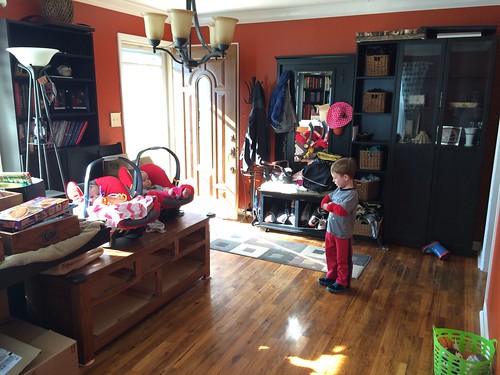 The workers got started right away and that first week they got a LOT done! Then after that things slowed down and they weren't coming everyday. I think the other project started so they began splitting their time. Really dragged things on.... They did demo the first day: 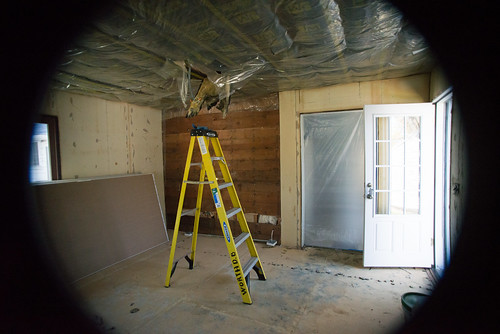 If only this wall were in better shape we could stain it up and have a pretty sweet accent wall, haha 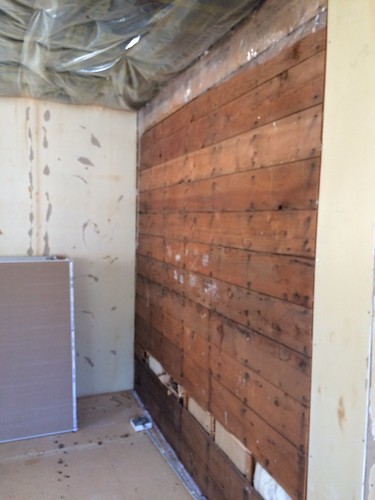 Turns out the ceiling didn't have much insulation in it, which wasn't a surprise. They installed new installation before putting in the ceiling.

Started drywall the next day, got ceiling done and one wall:

Oh also during this first week, we had the plastic up so we were having to take Harpo outside through the side door on a leash to the backyard. Super pain in the ass when trying to watch three kids and get a dog outside for his potty breaks. You can see in this picture we had them install three new outlets. The outlets on this wall were external, much like industrial four prong outlets. And the underlying wall explains that. They put the lower outlets inside the wall and added one up higher for our TV which hangs there. 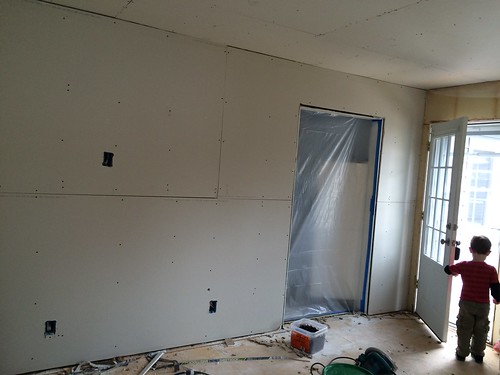 Day three they already had drywall done and first layer of mud up, like I said they worked FAST in the beginning. 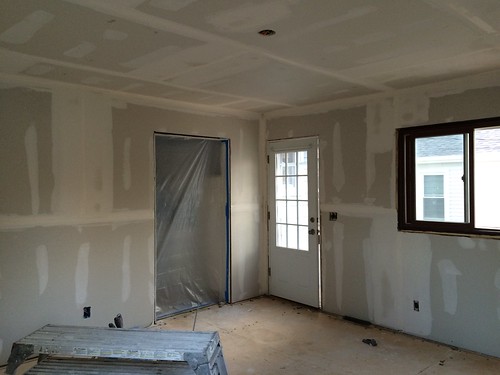 Day four was a rest day to let the mud get good and set, then they came back Friday for another layer of mud.

Meanwhile I wanted to fix up our existing light fixtures, I took them down and spray painted them. These lights are the kitchen and hallway fixtures. We got new matching fans in the living room and kitchen. 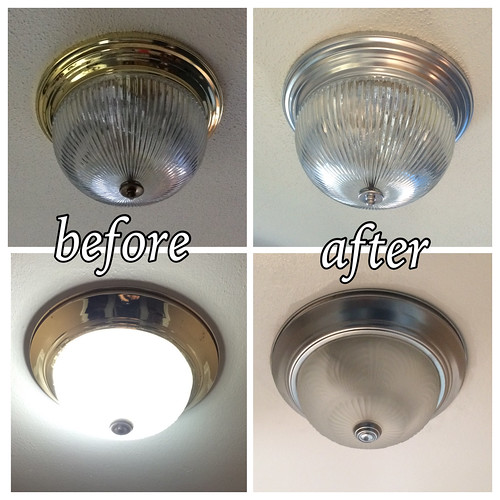 The next week (week 2) they didn't come much. We had originally thought sanding would take place on Wednesday so we could get in there and paint. We agreed to paint and do all trim to save some money. They came Tuesday for another layer of mud, didn't end up sanding until Friday! So by Wednesday I think it was, we decided to start on the windows, we sanded and cleaned the vinyl frame of our interior windows and primed and painted them to change them white. They were brown before. This was end of the day Friday after sanding was done:

I worked that weekend (of course when we needed to get so much done on the room) But Kyle was amazing and primed and painted the entire room himself. I did finish up the windows.

Saturday after a layer of prime:

Beginning of week 3 we were getting a little impatient. We originally had carpet scheduled for week 3's Tuesday... but due to paint and kitchen not being done we pushed it back to week 4's Tuesday. The lady recommended paint having a week to set before carpet install so any dings would be scuffs not gouges. Kyle took off work that Monday, like I mentioned in the girls bday post, so paint was finished Monday evening. Kyle wrote them Monday afternoon asking when the floor was going to get started so we knew when to move the appliances... sure enough he said "we can start tomorrow" so Monday night from 4-6 we got the appliances moved while the babies sat at the table and watched us. Floor and opening was done in two days and we had our kitchen back by Thursday. So that went fast! 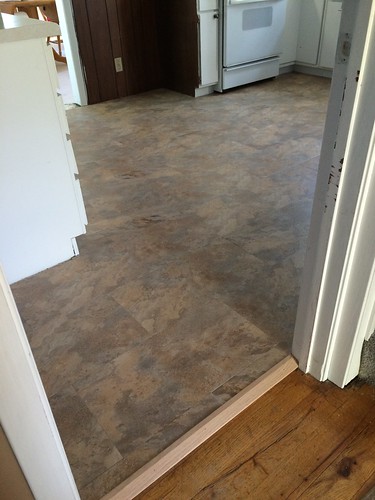 After debating about laminate wood vs real wood throughout two rooms. We decided to go with carpet in the back room again to have a warm living area and then LVT (luxury vinyl tile) to go in the kitchen. We're pretty happy with how it turned out. We could have put it in ourselves it was so easy, but after paying someone to watch the kids in order for us to get it done it's just easier to pay someone else to do it.

Wall opening made and jamb put in: 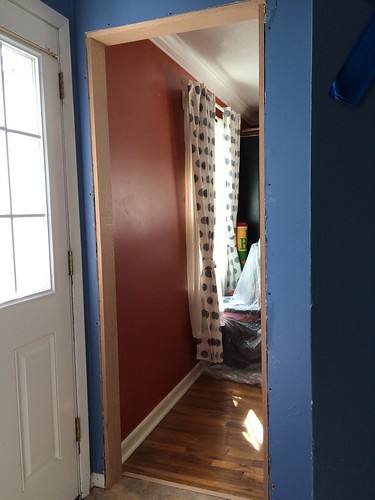 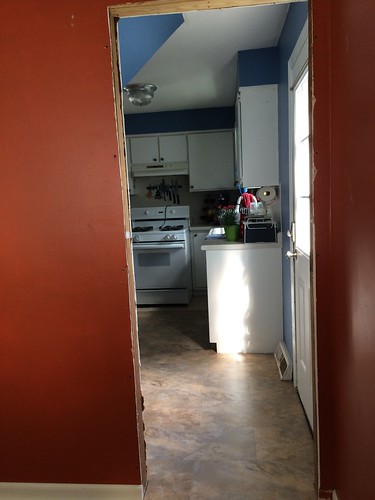 Still in Week 3, on Thursday they re-routed the cold return air vent we had in the middle of our walkway from the kitchen into living room. He couldn't fit through the whole the cut open in the basement into the crawl space so he had to make a new hole.... and patch it later. But now that ugly old vent is moved out of the way! 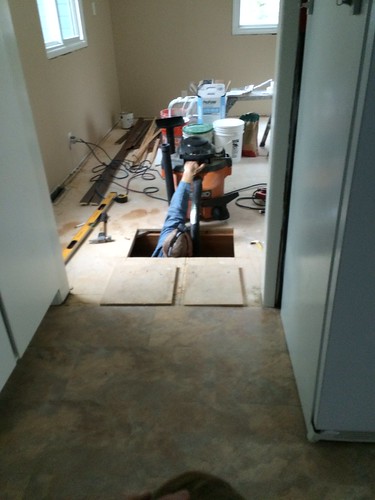 Then over the weekend Kyle and I busted out trim work in the kitchen. We weren't sure if we were going to complete trim or have them do it but after the bid we just decided to do it. After our recent turn of events we were out of a few tools. So we just decided to replace our compressor (for use of our nail gun and to air up tires) and instead of a power miter saw I found a really nice Nobex hand miter saw on craigslist for fifty bucks! Kyle really likes it and it even does compound cuts! It's pretty nice and cuts like butter (link above if you want to check it out). Figure no one will be interested in stealing that, hopefully. And it's so portable we were able to take it inside and not worry about a huge mess.

Here's the base shoe trim: 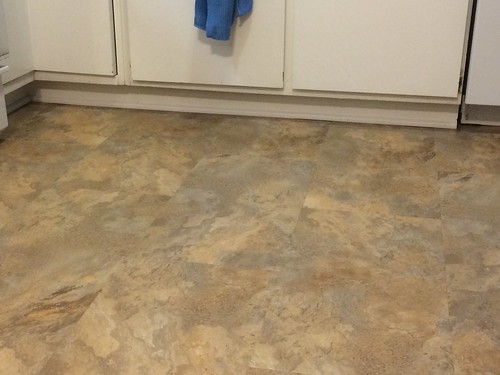 and door trim on 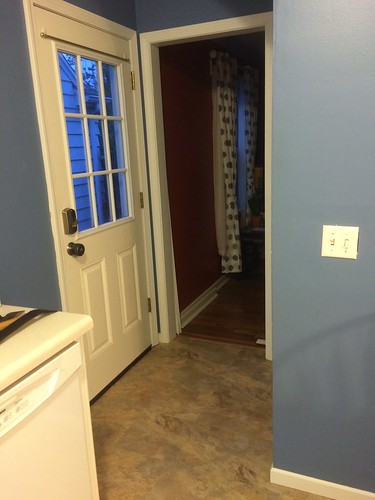 Going into week four we only had a few things here and there for the workers to finish up. Fans, finish outlets, register vents in the living room....

And Tuesday of this past week we got CARPET! WOOHOO! We have our room back!

Again the kids loved crawling around in the room 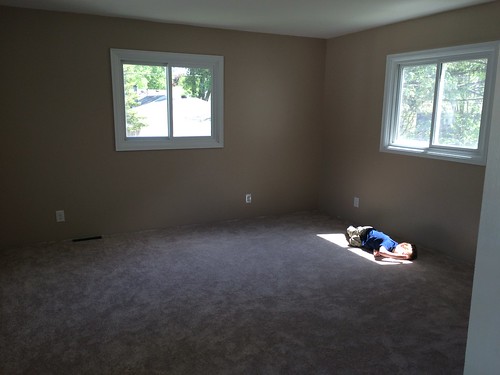 Tuesday evening we got the couches moved back in, which was a real pain in the butt. We had to take the legs off to get them through the doorways, and going back through wasn't any easier... Harpo sure was glad to have his room back 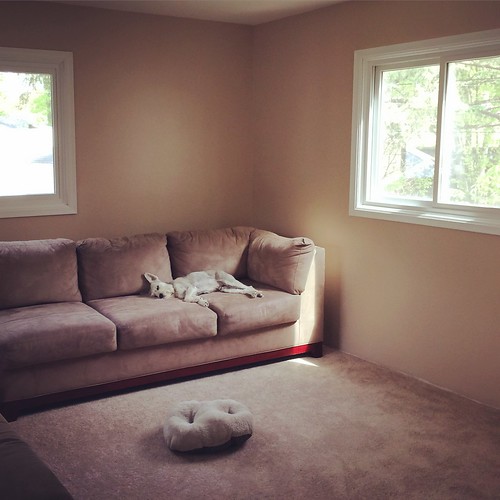 Wednesday and Thursday no one came to finish up, we were able to do the backdoor trim but couldn't' do the base trim until the registers were in. FINALLY Friday of the FOURTH week! They came to install the fans, finish the outlets, place the registers, and do a touch up on the ceiling.

The attractive over the top filled bagster had also been sitting in front of our house for four weeks. It was filled day one after demo. They came to pick that up Friday at 5:30. Only leaving a small patch of dead grass which I guess it better than all that junk still sitting there.

We had the previous trim from the room for the baseboards, we had never nailed them in knowing we'd eventually replace carpet in that room, so I got them all painted. We went to see how it fit and turns out the registers were MUCH smaller making all the trim TOO small! AHHH. But we used what we could and got them set in place. Still not nailed in and the areas behind the couch are bare but we'll finish up eventually. So we did that Saturday as well as hang the TV and move the table in while the kids napped. Here I am hanging the TV (Kyle was helping but stopped to take a photo) This is life with twins, always on my legs preventing me from being able to move around. 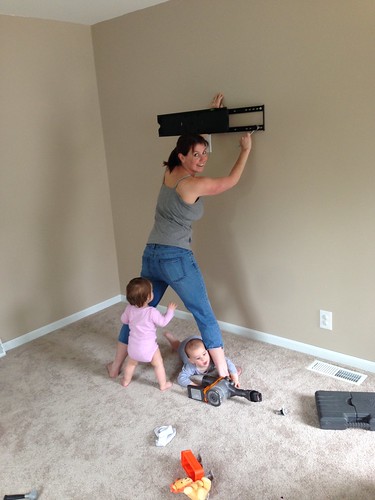 Better look at our new fan 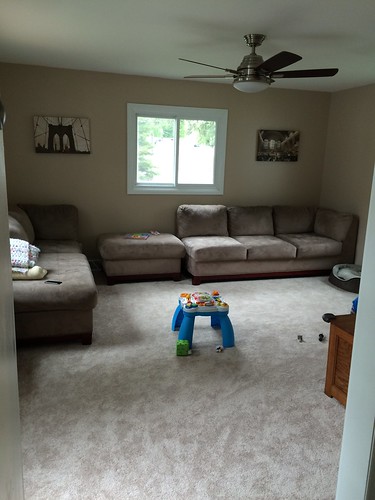 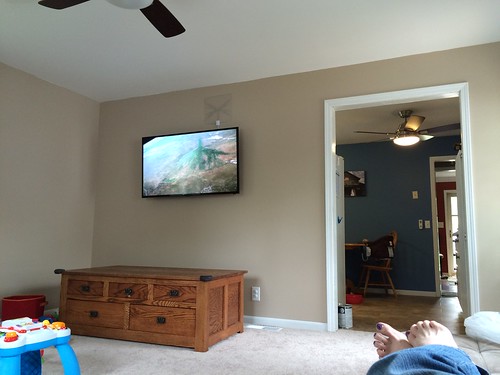 And the dining room almost put back together: 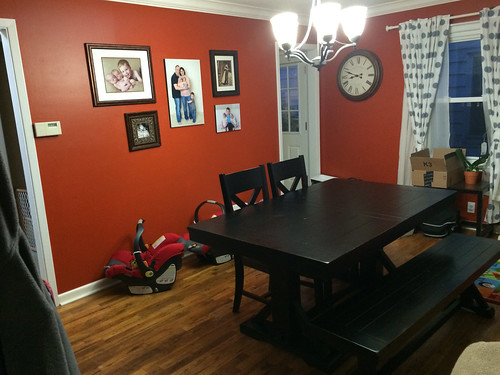 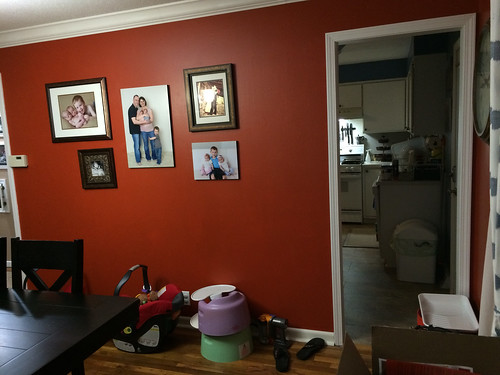 Everything looks awesome! Such a great idea to add the door to the dining room. Now all the kiddos have a race track too!