Swift Kick in the...

Sunday evening Kyle and I were starting to feel crummy and figured we were just getting whatever the kids had. Then Monday I actually got ALL the kids down for nap at the same time so I hopped in the bath, it was at that point I had this weird pain show up in my breast. Didn't think much of it but massaged it and figured it'd go away. It started getting worse and felt almost like a bruise, I remember it hurting at dinner when I leaned over to feed the girls and it hit the table. I also started to get a fever about 7:00. I wrote a few of my fellow mama friends and one friend had mastitis last summer and encouraged me to go in ASAP to get treated because she had waited 24 hours and it ended up being a long recovering for her. Kyle had an evening event and I didn't think I could make it to urgent care before it closed in 30 minutes so I waited it out with the intentions of going in the morning when they opened.

The nighttime feeding for the girls was VERY painful! And I continued to go downhill and ended up spiking a 104.4 fever. Friends had shared that heating my breast could helped and it did, it was the only way I could nurse and somewhat tolerate it. So all night I went in and out of fever, chills night sweats the whole sha-bang. And I knew that continued nursing was going to help so I jumped up every-time one of the girls woke up... unfortunately they were taking turns waking and one of them was waking every 1.5 hours... but in a way that was a good thing because I was able to keep my breasts empty. I went into urgent care the next morning. As I was heading there I was thinking how weird it is that we have to go to the gate-keepers of medicine. I knew what was wrong, and I knew what I needed (antibiotics) but I was unable to heal myself I had to have someone else there to do it. Granted I wouldn't know WHAT antibiotics I'd need but in our busy lives it's hard to get there to get this formality done. They did end up running IV fluids because my heart rate was elevated and I was a little dehydrated from the fever, so it was pretty much an entire morning spend there. I was able to lay back, dim the lights and be in silence for the most part. The fluids were great and really got me feeling better and I got my meds picked up and the first dose started.

I was hopeful the worst was behind me and I would be on a road to recovery because there really is no time for sickness when you are taking care of three other little humans. Unfortunately as the day went on and the fluids wore off, although I was drinking as much as I possibly could throughout the day, I started to head down hill again and the fever was just climbing and climbing. I also had a horrible headache and just ached all over. It's like getting the flu with the added dilemma of a very painful breast that is getting used every two hours. So the night was much the same, I was able to sleep on an ice pack which helped my headache considerably.

When I woke the next morning I felt so much better, so in the end it was about 36 hours of symptoms with the smoke clearing right about 20 hours after the start of antibiotics. But what I woke to wasn't sunbeams and rainbows.....

I had heard Kyle leave for work, and then I heard him return and come upstairs. The first thing he said to me was "We've been robbed!" My heart sank... "WHAT?!" at this point I didn't realize I was feeling better but as I sat up in bed and got out of bed I was saying to myself, well praise the Lord I am finally feeling better because now we have to deal with this. 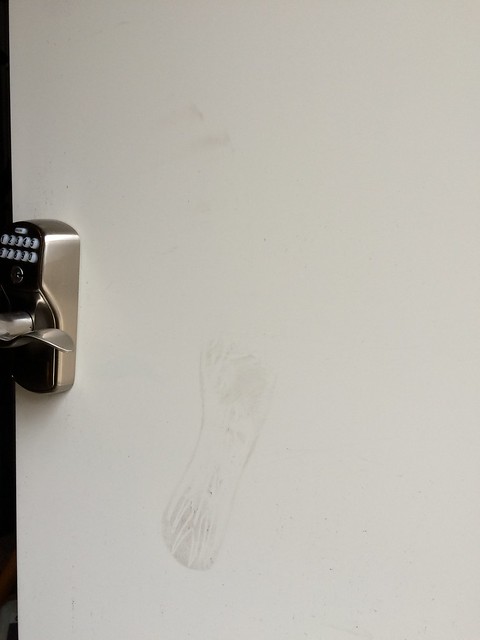 Turns out someone or people kicked in our garage door and robbed us. Every door to both our cars were open, every glove compartment, every cup holder opened, they had searched everywhere. It was such a creepy feeling thinking someone had searched through our personal space. We weren't sure what they had taken at first and called the cops immediately. Once they arrived we walked through with him and filed the report. He took photos, unfortunately prints are not done on cars unless there is blood on the scene, injured bodies, and a certain amount of money involved which we did not reach. He gave us some good ideas for garage security and recommended boarding up the door asap because they would know it is compromised. They ended up taking a miter saw, circular saw, leaf blower, air compressor, weed eater, and even a hand air pump we use on our bikes. Luckily not our bikes or any of the expensive kids' items we store in the garage. The officer thought they were on foot and probably lived close by because they usually carry the goods home. He was at another robbery earlier that morning, same kind of thing with the power tools taken. Except at the other place they also took the bike, but ended up dumping it a few houses down in the alley.

The police officer left and Kyle boarded up the door while I called insurance. Since we barely had a thousand dollars worth of good stole, filing a claim would really not be the best idea since our deductible was a grand and theft claims are frowned upon by insurance. Our representative stated if we are making a theft claim it should be well worth it. And making a claim for our deductible didn't seem like it'd be worth it.

Kyle changed back into work clothes and was going to head into work. Only to realize they took the car keys... which had a house key on it. And then I remembered my work badge was in the car. Other than that we had no valuables in the car. I immediately called my boss and got my badge deactivated. Then Kyle decided to take the rest of the day off. These two items added a new dynamic to the whole thing. We had our house re-keyed later that same day, which helped us feel better. We called about getting the car re-keyed and that would be about $1800 so really not worth it in our opinion...

The next day an officer followed up with Kyle in a phone call and stated our case was officially closed and could be reopened at any time. But without any leads or a suspect and no evidence to lead them anywhere they mark the case as closed. He did share that there were many others in our area that same evening. This information actually gave us a little closure, I don't know if it was knowing we weren't alone and there were others sharing our misery. Or maybe it was comforting knowing we were a direct target and that it was just a random chance our garage was a mark.

All-in-all it's been a rough week, but we are sure thankful for our three little bundles of joy and I don't mean that to sound cliche. Things could have been much worse, they could have vandalized things or attempted to get in the house. We are truly blessed with our life and our family. Kyle and I frequently tell each other how wonderful our kids are, they are all so stinkin' adorable and happy, healthy kiddos. We know this is just a tough road block in the walk of life.

The tires in Kyle's car are bad and frequently go flat, he uses or I should say used the air compressor to air up the tires two to three times a week. Well he wanted to be on top of it since he wouldn't be able to last minute Monday morning and we all loaded up and headed to the gas station to put a dollar worth of air in the tires. On our way we just noticed more and more things that they took. The tire gauge, an auxiliary cable for music, and a dual USB car adapter... each new thing seems to be like a new jab and we know it will be a while before we can completely put this behind us. But we will be able to. We made a trip to the hardware store and picked up some stuff to fix the side door and we have other plans to better secure our detached garage.

We went to church this morning and it was the first day the girls attended the kids ministry room and we were KID FREE for the complete service. Pretty amazing and such a weird feeling. (the girls did great by the way and Mary even fell asleep on one of the workers so shows how comfortable she felt, heehee) But it was weird, or maybe I should say perfect because God speaks to us when we most need to hear it. But the sermon had SO many words dropped that pertained to our situation exactly. So many mentions of locks and keys and fear. Again a great sermon I'll link it once it's posted. I can't help but think through all of this how God can show us some good. We immediately used it as a teaching tool to Isaac to teach him that there are bad people in the world. We explained we had things that were stolen from us and how we felt about it. At one point Isaac, being the adorable little boy he is, asks "Did they take those things because they thought it was theirs?" In which we explained, "No, they knew those things weren't theirs but they took it anyway. We shouldn't take things that aren't ours" Another good thing to come of this is just time to reflect on what is truly important and that we can't live our life thinking of all the things we could have changed. I wake up MANY times in the night to tend to the babies, and I was kicking myself that next day asking myself "WHY didn't I just look outside and notice the garage lights on? Maybe we could have stopped it or heard it or scared them away" But really why would I look outside, I sure as heck do now and have every night out of paranoia... but never would have thought to pay attention to the garage before then. There's nothing we could have done to make things different, just learn from it.
posted at 4/12/2015 07:47:00 PM

Hopefully things are better by now. Gives me the chills just thinking about it!