We had a few lingering things to finish in the girls' room so I was waiting to post until we had it all completed. We got the room painted a while ago, mid-January. Isaac got his twin bed and we moved his old crib in there at the beginning of February. The last item of business was the linen closet door which we got hung last Friday! So nice to be finished. It's pretty much ready except a chair. We are in the market for a new rocking/glider as the one that is still currently in Isaac's room is 1) not big enough for twins 2) honestly a piece of crap. I think we might have found one so maybe we'll get that purchased and moved in, in the next few weeks.

So here are the photos:

Walking into their room. Story about the paint real quick. It was originally quite a bit lighter, we were shooting for gray.... but it was looking more purple to me. So I took it back and had them add some black to it to try and knock the purple out. It worked and now it's just a tad darker than planned but that's okay we were able to work with it. Oh and a new rug which matches Isaac's and the hallway rug, just in a gray shade instead of tan. 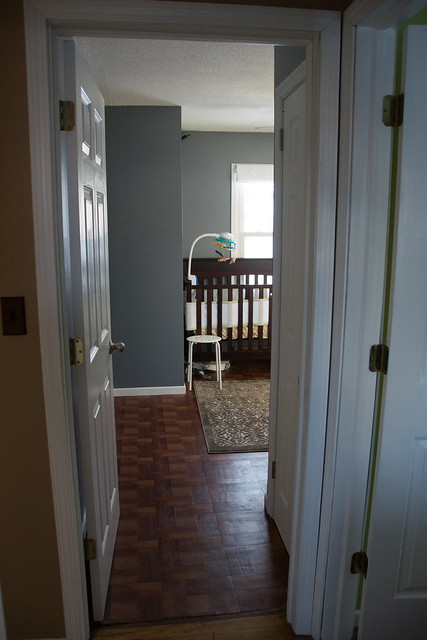 Here's the new linen closet door! For some reason the linen closest is IN the bedroom which kinda stinks. And before it had a slide door (like the one on Isaac's closet and the girls' closet) but we wanted to avoid the sliding door because it can be a bit noisy and if we were wanting to sneak out something from the closet down the road we wanted the door to be as quiet as possible. So we just decided to put a normal swing door in. Which required painting, shaving down, and installing in the already existing frame. Here's their room decor, I made the vinyl trees using my cutting machine (silhouette cameo). I'm happy how they turned out, although never fun to cut 7 foot long pieces of vinyl. It's a woodland theme so the trees fit nicely. We bought the second crib off craigslist (like we did with Isaac's two years ago). It's a popular crib so it was easy to find one to match. And I even got a better deal on the second crib ($60 with mattress!! Isaac's was $75 with mattress!) 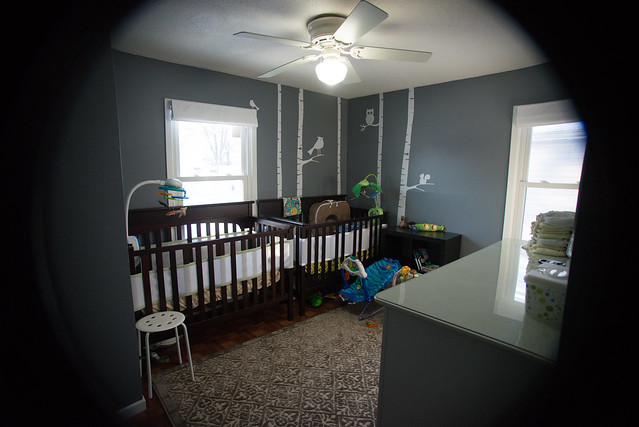 Here are the three sheets I made as well: And the felt creatures I made for their mobiles: 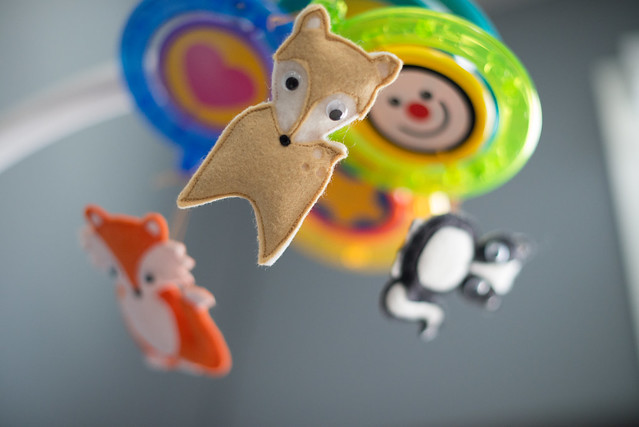 We originally were planning to have dark wood furniture like we had in Isaac's room. Hence the cribs and the little book shelf that is dark. But after the walls turned out darker than planned and in an effort to save as much money as possible I just decided to give the girls my dresser (most of my clothes are now in boxes which they weren't getting worn anyway - a friend was nice enough to give us an old dresser her parents were wanting to get rid of). It fits in great! And looks good with the wall color. There had been a recall on the knobs as they are made of glass and tend to shatter and cause lacerations (which happened to me a few years ago). I never followed up on the recall because it was just me using it. Since it was now going to be theirs I wanted to get the replacement knobs. After a few headaches and too many minutes on the phone we just went to Ikea. The recall was in 2009 but it was still listed on their website so they had to have knobs lying around! It was actually quite easy after waiting in line for 20 or so minutes. Got six new plastic knobs and we were on our way! We also got a white version of the same mirror that is in Isaac's room. Notice the little hedgehog on the light switch cover, my fav! And then here's the closet, installed a new closet door and put up a second rack just like Isaac's room. It's nice to have that extra space to hang clothes especially when they are so tiny! And def going to be nice since there will be two living in this room! We had been taking my belly photos in this room and I just got done with this week's photo when Isaac wanted his photo taken as well :-) We are all battling colds and his face is rather messy from a granola bar. And here's my latest sequence of belly photos. Not changing too much as far as out front but getting wider on the edges.

It looks so cute! So do you!

Looks fantastic! Congrats! Coming up with a theme or room to fit twins is never easy. You did a great job! Do you have some extra plain sheets on hand? We have 6 sheets for our twins, but we never thought we would need them. Then, in a 24 hour period, we went through 4 of them in rapid succession with only two remaining clean. Just something to think about! You are definitely lucky that you already have had one baby so it's not all new to you. We were learning all of the new-parent tricks WHILE juggling twins... not easy.