Back in January we ordered some new appliances. We had our eye on some similar to what we bought in the old house, but they were discontinuing the counter depth fridge so we moved on to a different brand. We had a small gift card to use up and one of the few places it could be used was Lowe's so that was our deciding factor. We went with the Bosch series and like it so far. The delivery experience wasn't all that great.

The appliances were all in working order, but the microwave handle was actually broken. We didn't buy the microwave in the first batch order. But the more we used it and awaited our new oven and fridge, the more we wanted to just upgrade the microwave as well. So we ordered it and picked it up well before the delivery of the previously purchased appliances. We installed it ourselves and are happy to have a handle that doesn't fall apart when you open the door. We were limited in the model because of the size of our opening, so the microwave is actually the 300 and some model where as the others are the 800 and some model. 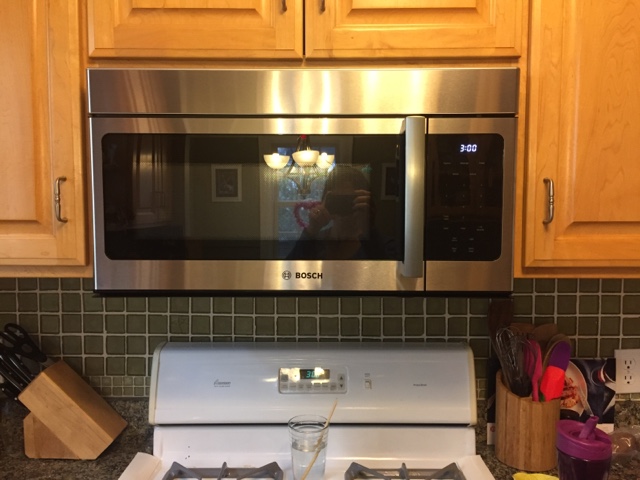 Getting a new slide in range meant we needed to fix a problem in the tile. There were four missing small pieces on the kitchen back splash that were hidden by the previous range. We were very lucky in that Kyle emailed the previous owner (whom works at the same company) and his wife was able to locate the old work order from who updated their kitchen 10 years ago. I called into The Tile Shop and unfortunately this tile was discontinued but luckily there was 30 or so sheets left. We weren't sure if it was the large tile or the small tile (which we needed the small) that they had in the warehouse. We ordered a sheet and hoped for the best. Woo hoo it was the small tile. So a few days before the oven was set to deliver we got to work on our first tiling/grouting experience.

Here is the progress sequence for getting the missing pieces in. We took a few more pieces out that were chipped making it a total of 9 tiles we put in. 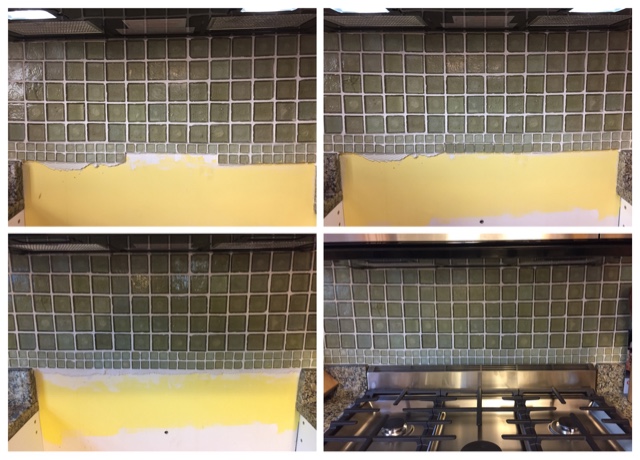 Delivery day came. That was a fiasco in itself. For one they would not deliver and install on the same day and tried to tell us they wouldn't take the old stove and would be back. I have recent experience of this exact same thing and home depot had no problem with setting up the delivery and install at the same time... but Lowe's was not willing to do so. So delivery was Wednesday and gas install was Thursday. I did talk with the contractor (installer) and if we unhooked it from the gas line ourselves they would take the old one in one trip. I was hosting my BSF group Wednesday evening so I really didn't want a spare stove just sitting around. Luckily I didn't have to, I just didn't have a working stove.

Thursday they came and got it installed and all was working great. We love the slide in feature and how the controls are on the front verses back of the range. We decided to forgot the double oven but I did want convection back, so we got that. Here are the before and after photos: 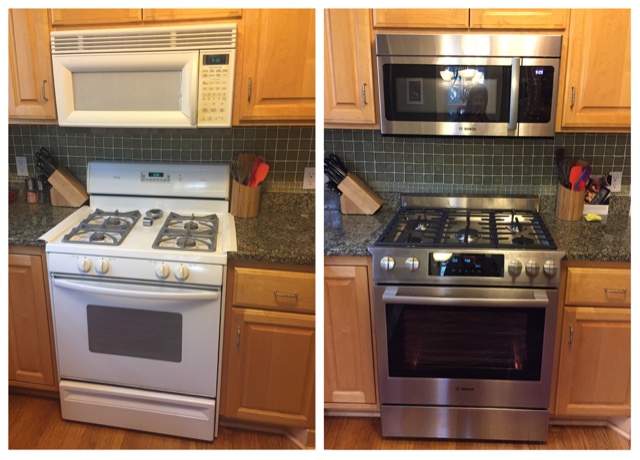 For about the next week, well until yesterday. I kept thinking I smelt gas when I came into the kitchen. It wasn't enough to set off the nearby carbon monoxide, but enough for my heightened pregnancy nose to detect. Kyle couldn't smell it, so I was trying to convince myself it was nothing. As the days passed I decided just to call Lowe's and see if they could take a peek. They called the installer back and he came over within a few hours, checked and sure enough there was a tiny leak at the hook up sight. Sweet, so I wasn't crazy. He fixed it and I haven't smelt anything since.

Back to delivery day. That was the stove. And here is the fridges story. We are still without handles... which I was waiting on blogging until we got them, but decided to just go ahead and share the story.  The two delivery guys got the old fridge out which was huge for the space and the whole reason we wanted new appliances. The fridge stuck out in the walk way and we replaced it with a counter depth.

When they unboxed the new fridge he called me outside because there was a dent in the corner. It ended up being in the back corner and I could have chosen to have a new one sent or receive a discount. Since it wasn't even going to be noticeable we went with the discount. They got the new one in and discovered the handles and base plate were missing. Wonderful. I called the store as soon as they left and there are new ones on order. As soon as they arrived they will be delivered and installed. Still waiting.

Now when they unhooked the fridge, I had to turn the whole water off to the house because we couldn't get the saddle valve that went to the fridge to shut off. When they went to install the fridge water line (for the ice maker) he told me he couldn't because we didn't have the proper conversion from the plastic fridge line to the house copper line. Seriously!? So when they left I was actually left without water in my house and a fridge with no handles. I took matter into my own hands, searched the back of the fridge where there was clearly a water kit located, and installed the water line myself. Isaac helped be my eyes when I turned on the main water and there were no leaks, woo hoo, success! 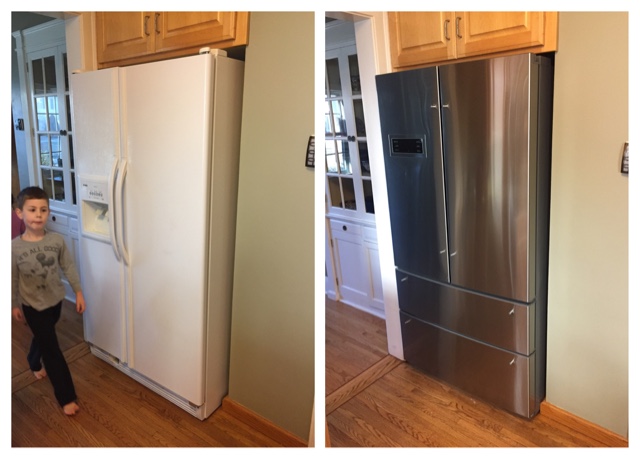 Here's the inside after a Costo run. Our old fridge was like a game of tetris every time we went grocery shopping. We try to keep only what we need/use in the fridge too, so that other fridge was tiny! 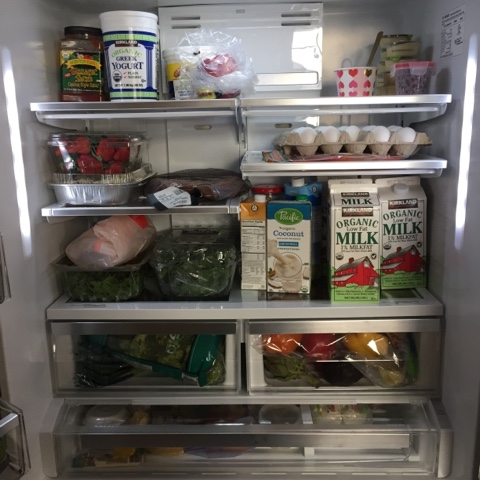 They look great, what a fabulous upgrade!