I wanted to share a recent recipe we made this past weekend. Mason jar salad's are all the hype right now, as they should be; they are amazing! With a little time and effort put forth on Sundays, Kyle and I have at least two lunches accounted for during the week. Saves so much time later on as we can just grab a jar from the fridge and go. And since we are following the 21 day fix clean eating plan, I like to mark the top of my jar lids with a little sticker to remind us the container count.

I originally found this recipe on Strictly Delicious, but I needed to make some modifications and additions to make it how I wanted and to figure out a correct fix container count. 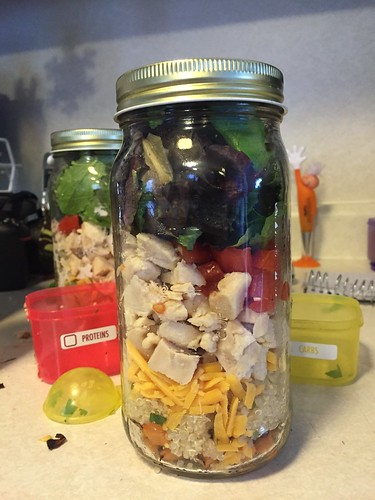 I don't know about you but we haven't been to chipotle in quite a while after all the E.Coli scares and people getting sick. Which is sad because it was one of our favorite places to eat. This doesn't excatly taste like a Chipotle burrito bowl, but it's pretty darn good and healthy for you!

Instructions
Make quinoa and sweet potatoes a head of time; these need to cool. 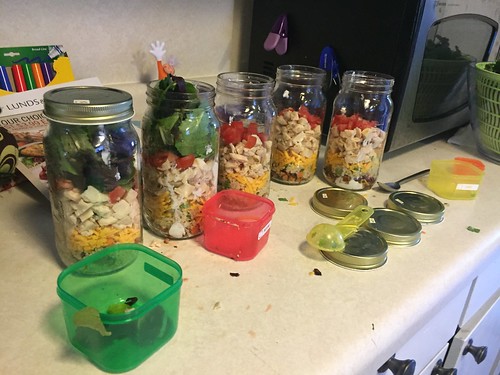 Layer salads in this order; this is for one jar, repeat with remaining four jars. I liked to use matching jars I have that were originally jarred peaches from Costco.
Place in fridge, til ready to eat. If it's just you, you have lunch for the week!!! Kyle and I share these so it gets about half our lunches planned for the week. You could try and eat it out of the jar, but I prefer to dump it on a plate so I can mix it all together better.

The chicken I like to use is packaged grilled chicken, with little to no additives; also from Costco. I used to love the packaged rotisserie chicken there, but it is rather salty so I opted for this cleaner version: 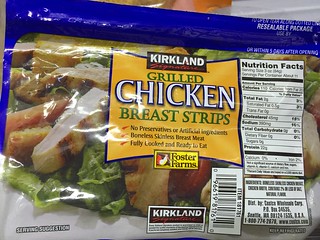