Wow, the past four months have really flown by... but at the same time each day seems to stand still. Both girls are now rolling over. Mary was first to roll over a few weeks ago so now she is a pro and won't hold still. Emma has just got the hang of it the past few days and is a little more selective with when she wants to. I can't really list any 'typical' characteristics because as of the past 48 hours everything has changed! Emma usually is the one that goes right down when I lay her in her crib, but lately Mary has been doing that. Mary usually takes more work to get asleep rocking and nursing more... but lately that has been Emma. So they may be switching rolls or just hitting a growth spurt.

They have definitely found their hands and love chomping on anything and everything. Drool has kicked in as well. 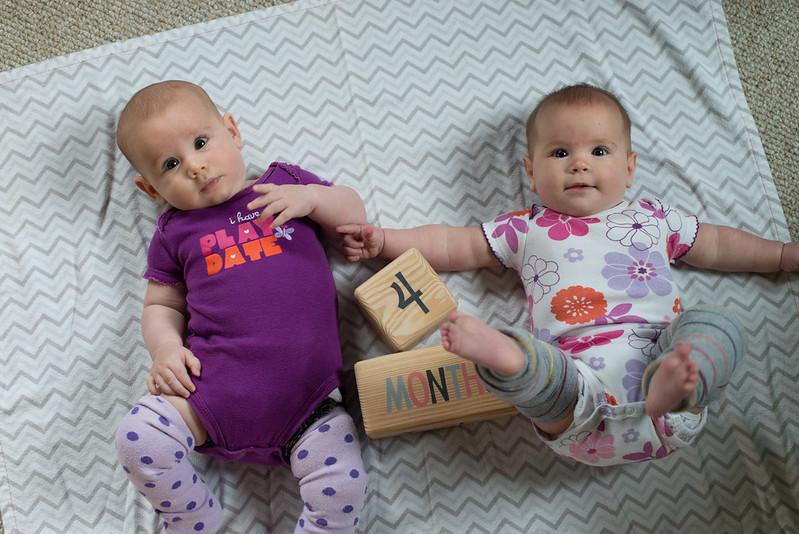 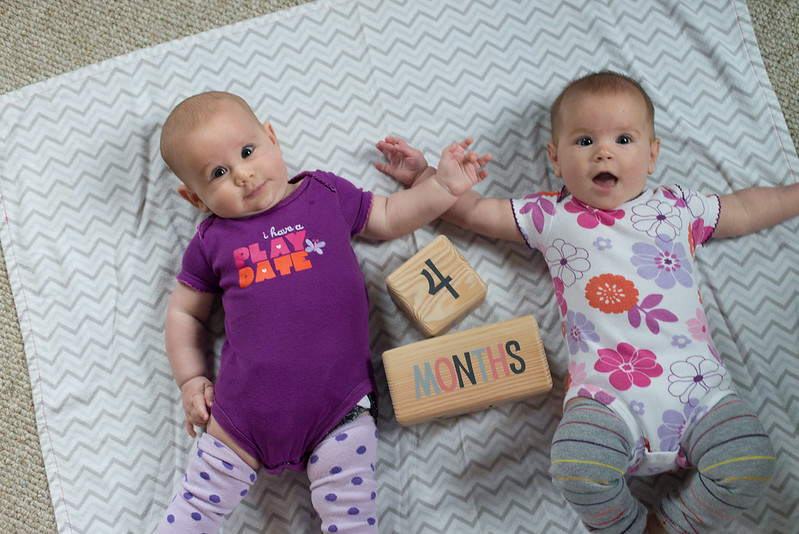 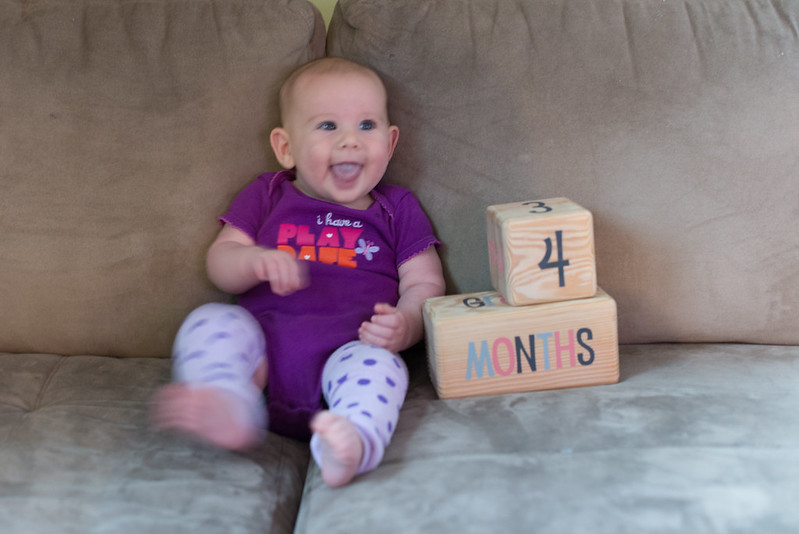 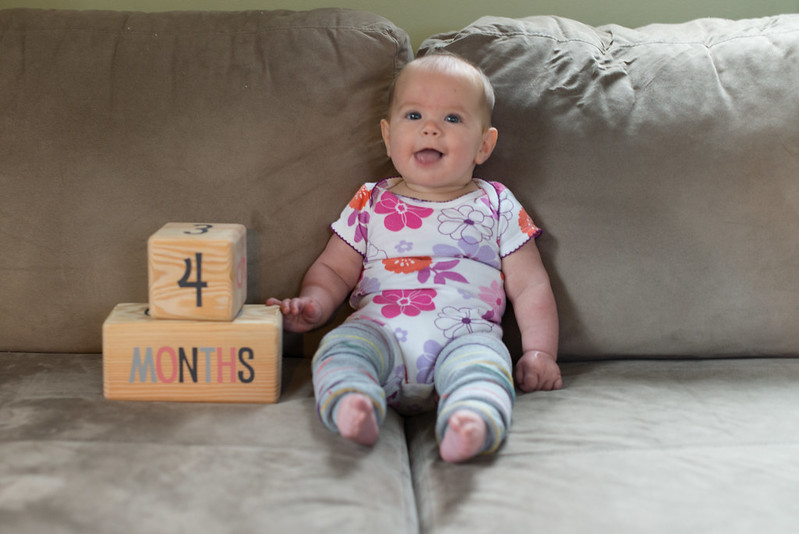 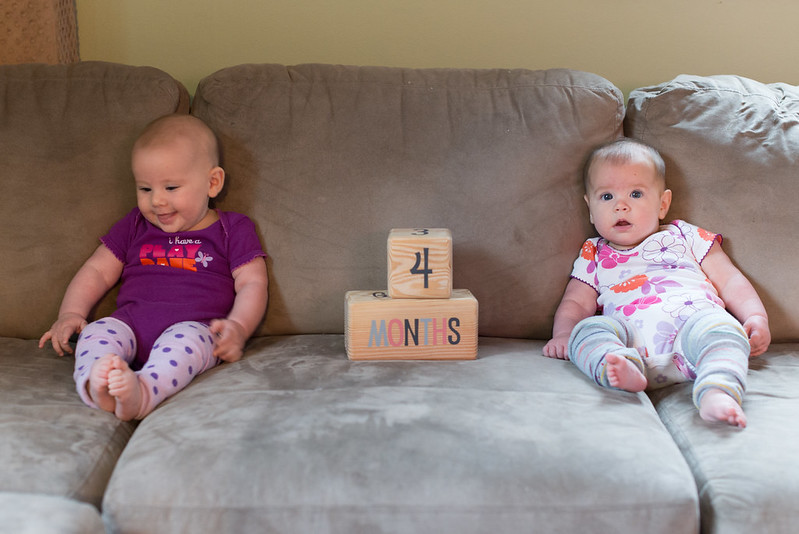 Photos from a few weeks ago: 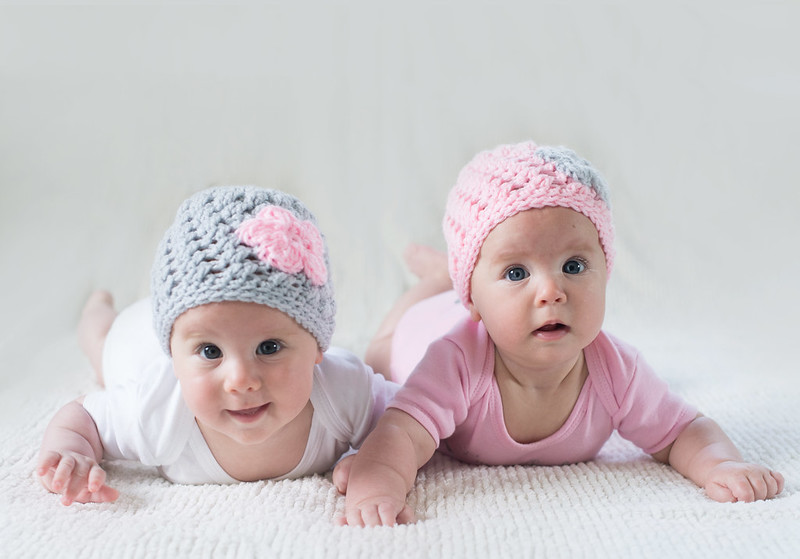 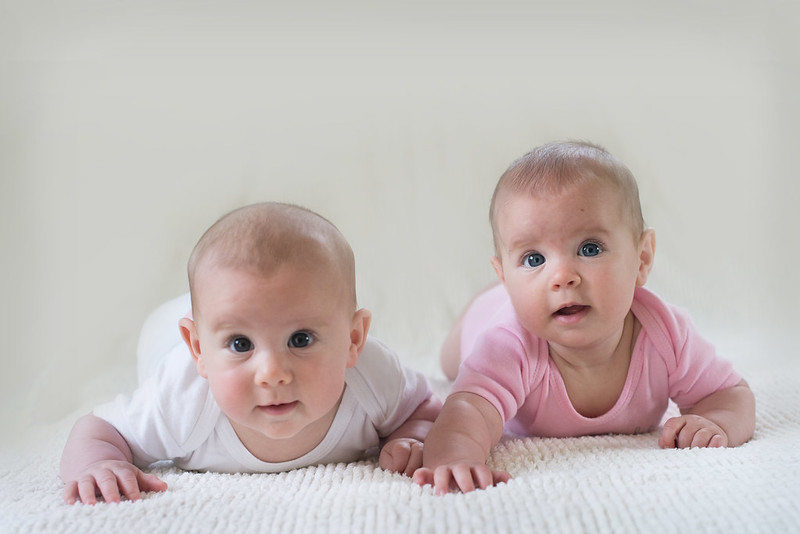 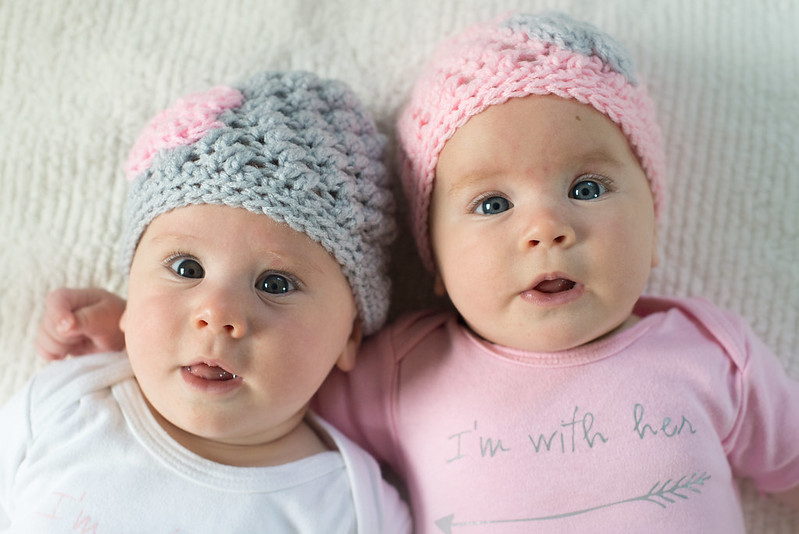 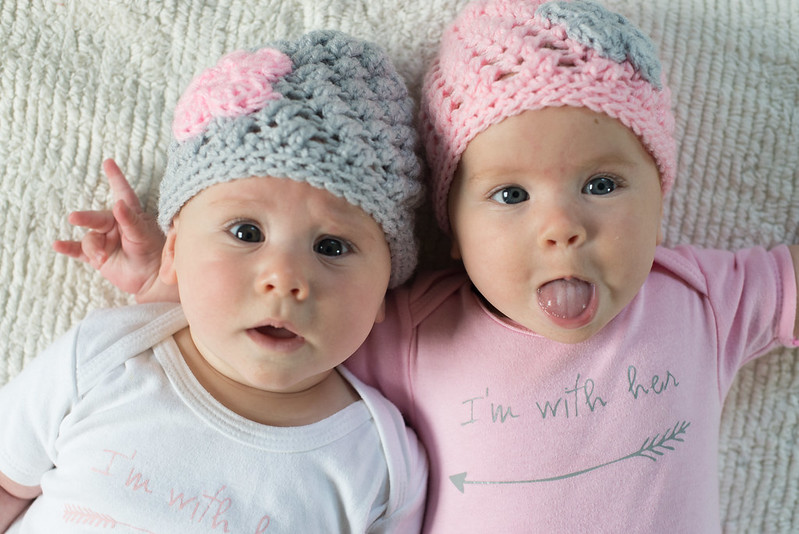 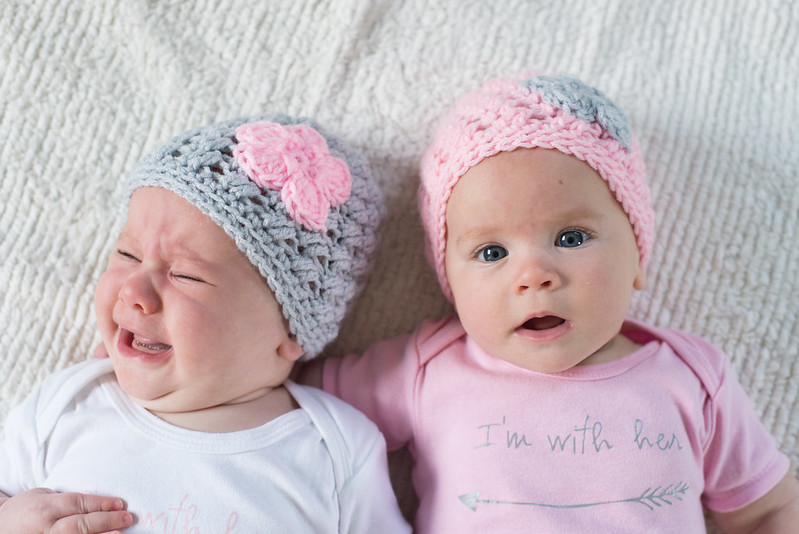 Oh and I'll also share this new addition to our family with you. We broke her in with a trip to La Crosse, WI last weekend (will post about that later). 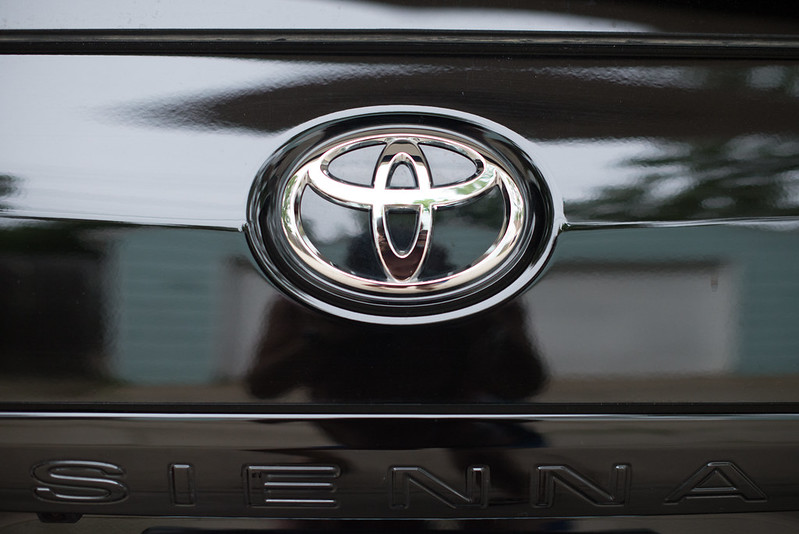 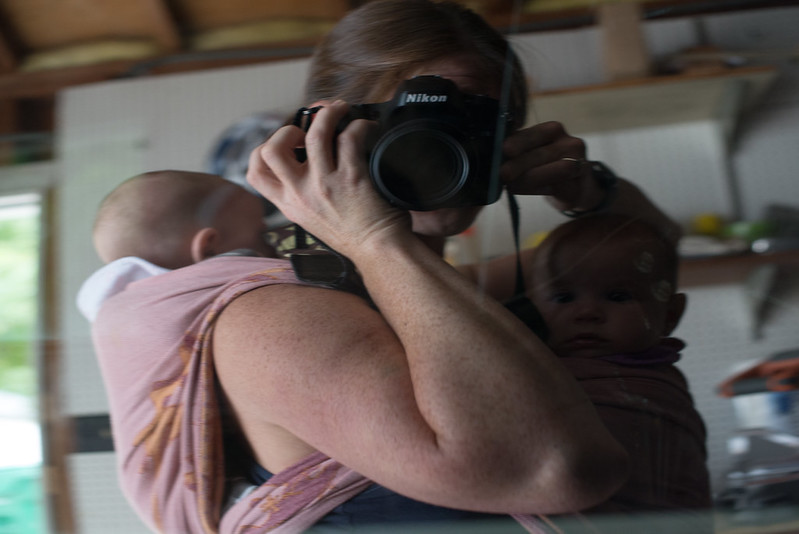 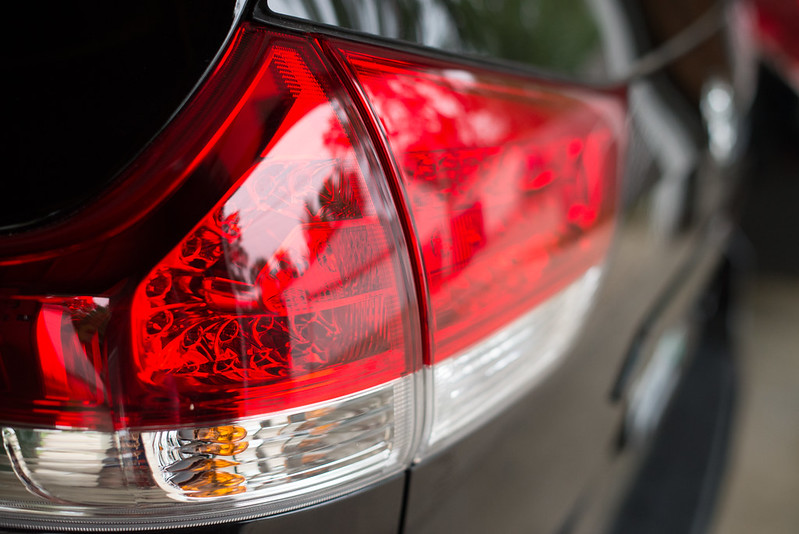 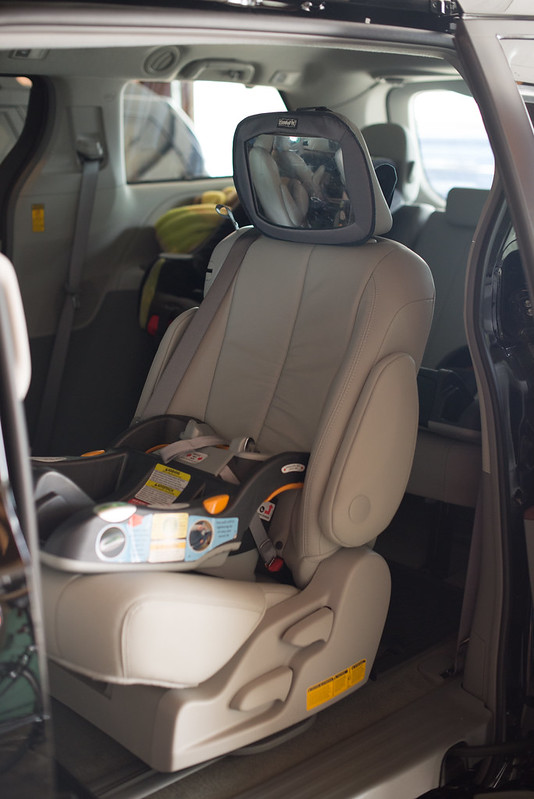 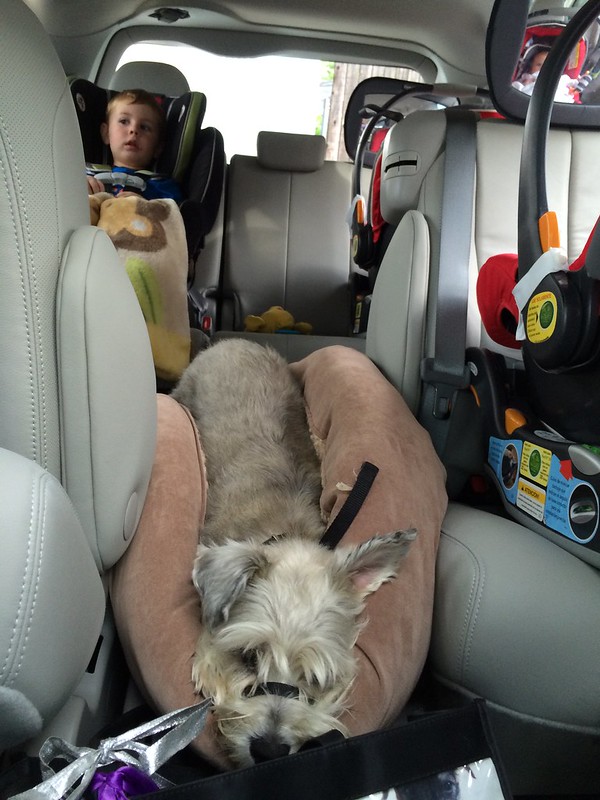 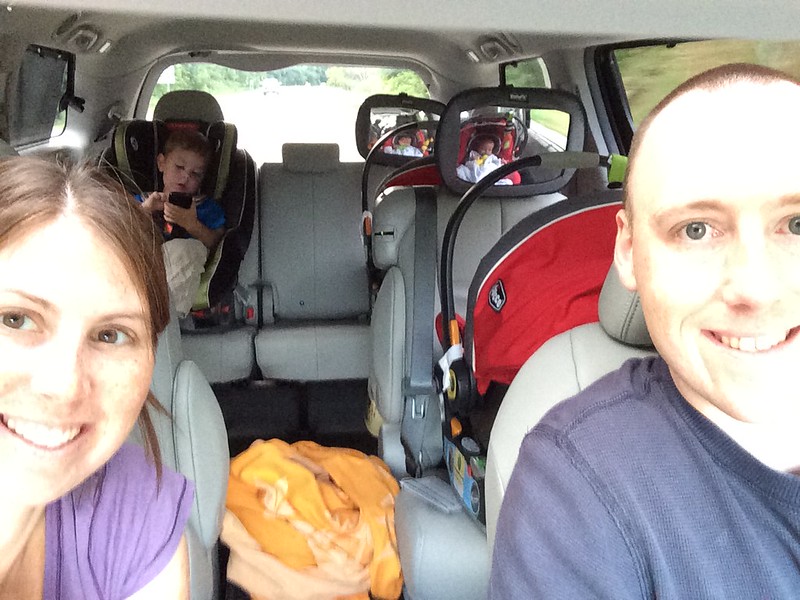 ONE more piece of news. Wow this blog is full of excitement. Isaac is potty trained!!!! It started last Wednesday when I got fed up after he had soaked through his diaper and onto the couch before 10am. I was so aggravated I said "THAT's IT! NO.MORE.DIAPERS!" and made him go pant-less the day. He immediately figured it out, we didn't even have accidents on the floor. I put a potty in the living room, a potty in his bedroom, and left the potty in the bathroom. He started off going to the potty every 15 minutes and I was thinking "Seriously! This kid pees so much!" But by the next day it was about every 30-1 hr and Friday we even tried pants on (no underwear) and a trip in the van and he did great. I think it was Thursday evening we took a quick van trip and he had peed on the walk to the garage so we changed pants, he stayed dry the whole trip then when we were walking back into the house he peed in his pants. But luckily not in the van! :-) Then we were out of town all weekend so we were back to diapers, which set us back. Even though we told him if he needed to go to tell us and we'd take him to the potty. He went a few times in the potty there. Then Monday it was back to training. We went to the park, but tried underwear that time. Something about the underwear made it tricker because he would pee in them more, but not full blown pee just dribble dribble. He ended up pooping (it came quick, I could tell he was needing to tell me then he just pushed and it came out) so those undies got tossed. But then he pooped on the potty shortly after that at the park. Then Wednesday he pooped on the potty and Thursday and today!!! And today we had ECFE for the girls and he was in his own class with his friend. I thought for sure he would wet his pants because they didn't have a bathroom in the room and I had showed it too him right before down the hall and tried to get him to go but he didn't want to. When I returned he still had the same dry pants on! We headed to the bathroom and he was acting a little scared of the 'big toilet', so I convinced him to stand and he DID! So, so proud of him!!!
posted at 9/12/2014 02:15:00 PM