On Sunday of our trip we took it much easier than the day before. I was feeling all the walking so we knew we wanted to be low key as to not completely wipe me out. But it was Kyle's last full day before his conference started so we didn't want to just sit around and do nothing either. 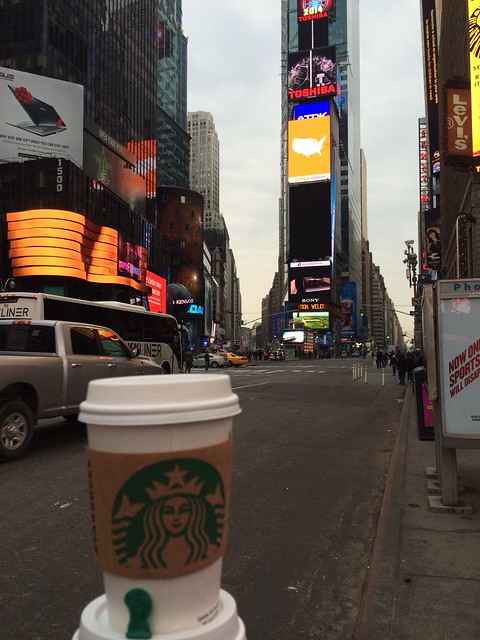 And boy did that make a difference! It really lifted my spirits of the whole trip. As I mentioned in my previous post I had a minor melt down Saturday night when I realized how limited these babies actually made me and my desire to go-go-go. Traveling with Isaac is rather exhausting and out of habit I am continually on his level or picking him up etc. So being able to just walk by myself, breath the New York air and get a cup of coffee was all I needed to renew my excitement for the city again. Don't get me wrong I love my little muffin cakes but he involves bending over (even if just slightly) to hold hands, carrying a bag, and all that other fun stuff that comes along with toddler care.

After we were all ready and ate some breakfast in the hotel room (of instant oatmeal, unfortunately we didn't have a refrigerator as we had planned to get milk and some other things to be able to eat a few meals in the hotel) we hopped a train to make the transfer to the Tram for Roosevelt Island. 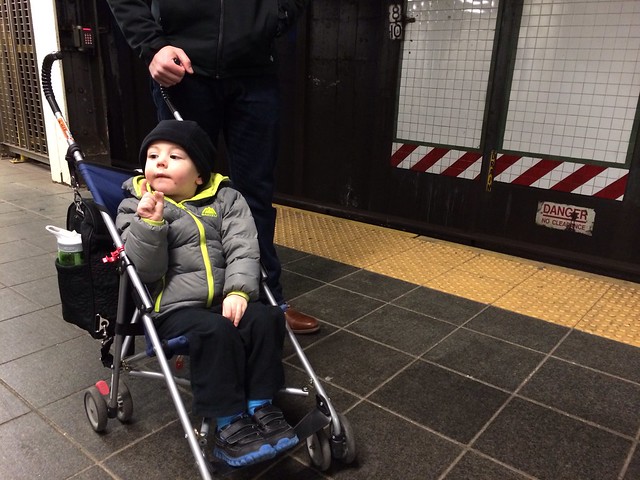 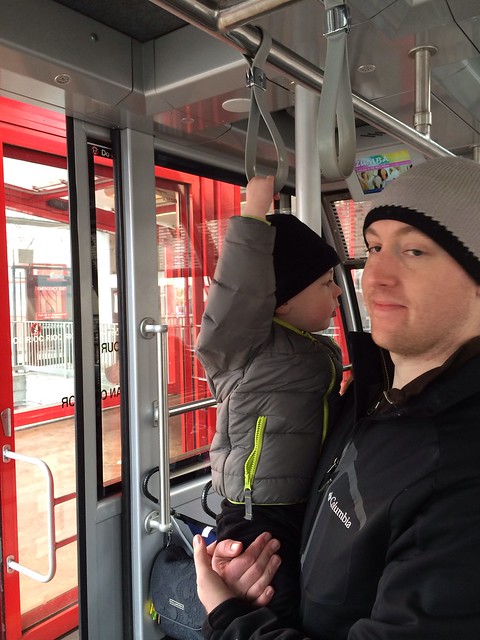 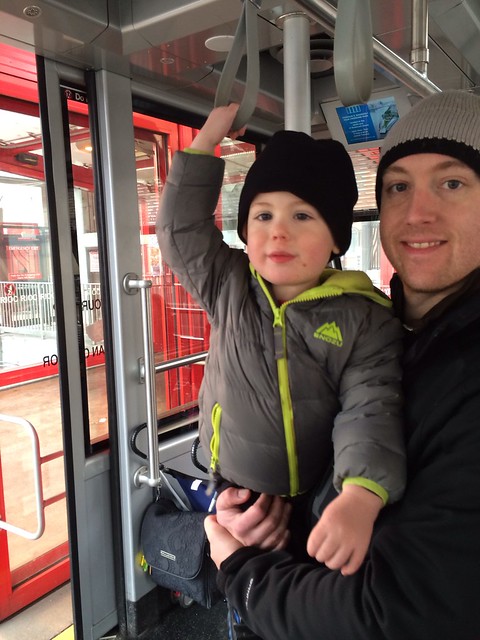 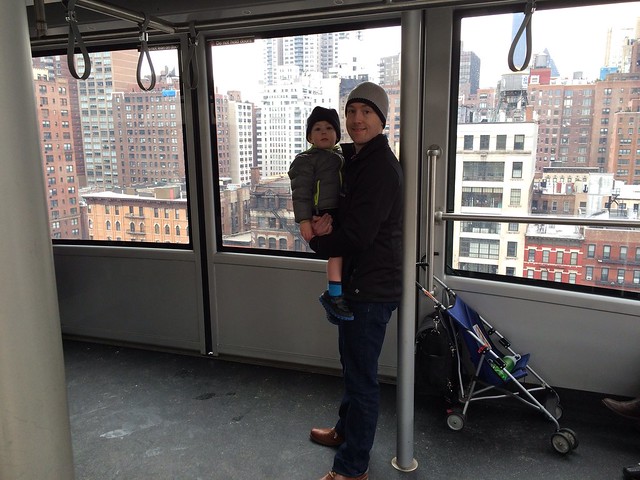 Blurry, selfie of the fam: 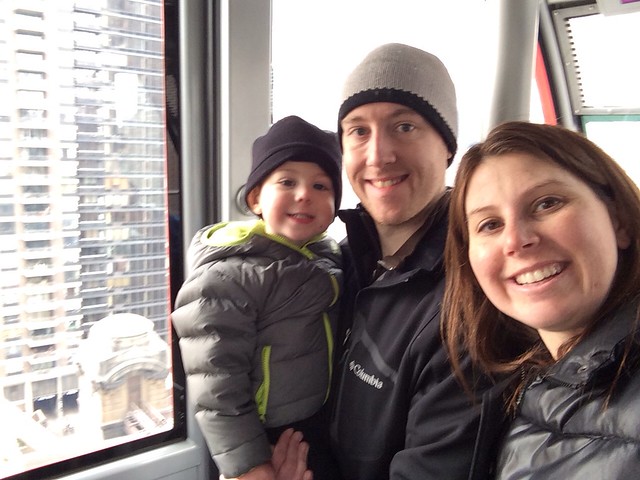 (I decided to leave my nice camera back in our room as to help make our travel a little lighter - and easier)
Clearer photo but no smile from Isaac: 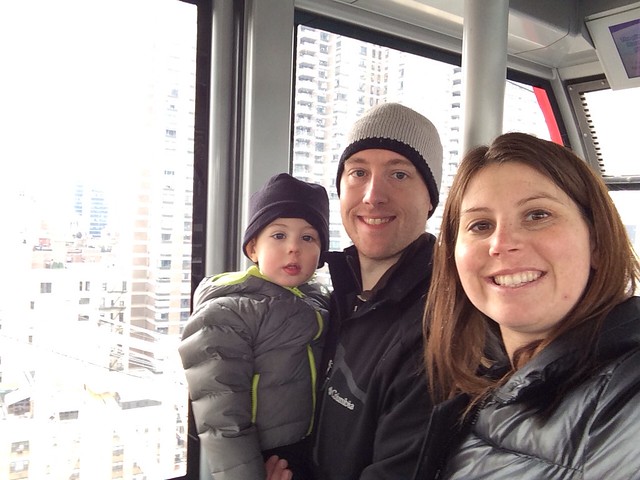 And one with the passing tram in the background!!! Isaac probably thinking "really? are we done with these selfie's yet?" 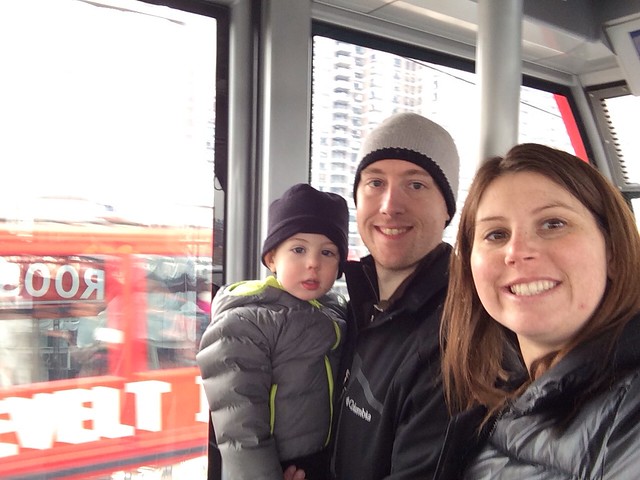 Honestly I have OODLES of photos taken from the tram from when I lived there and our last visit, so it wasn't as much a priority to get all the good views. But I couldn't help getting one toward Cousin Patty's apartment: 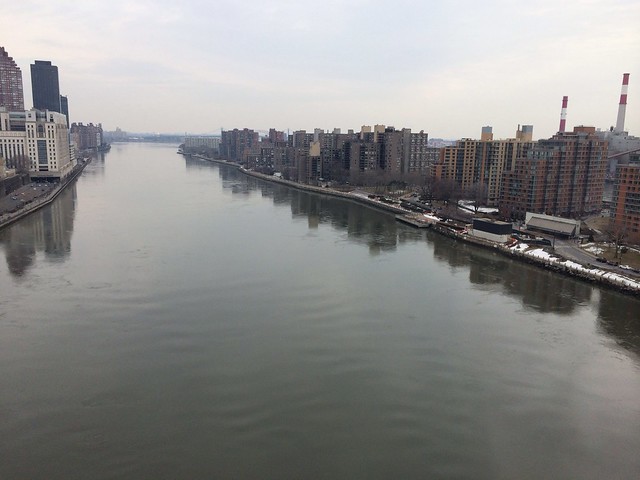 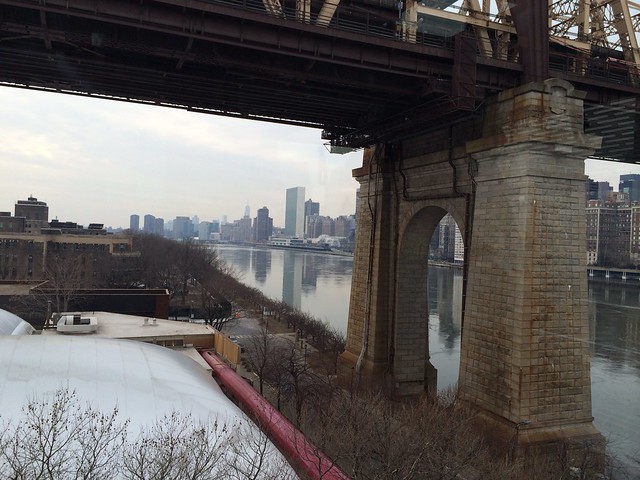 We had a nice visit with Patty and her two boys. Josh was even there with his girlfriend for a bit before he had to catch his bus back to Rhode Island. Isaac was acting like he wanted to nap the entire time, snuggling in my lap and even laying with me on the couch. But he never actually fell asleep. Patty had to head to work shortly after Josh left so we visited with Patrick and Anthony for a bit then we headed back to the island as well. And we knew as soon as we got to moving Isaac would be out and he was. Sleeping on the tram: 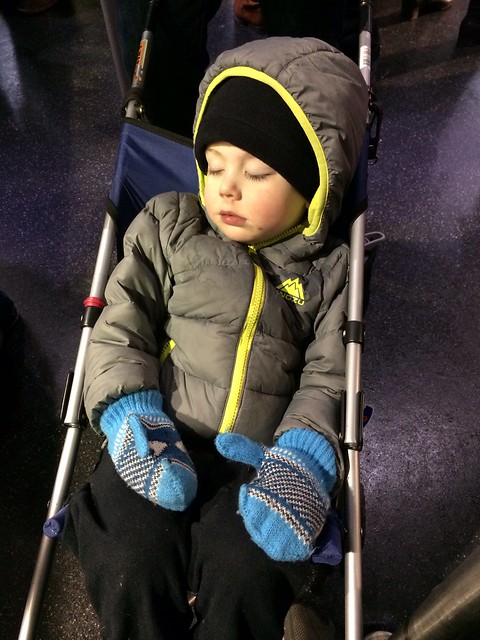 We weren't sure what else we wanted to do for the evening, but we knew we'd need to eat eventually. So once off the tram we transferred to a train downtown and got off near Union Square. It was pretty cold, okay really cold. But we took a seat in the park and searched our phones for a nearby place to eat 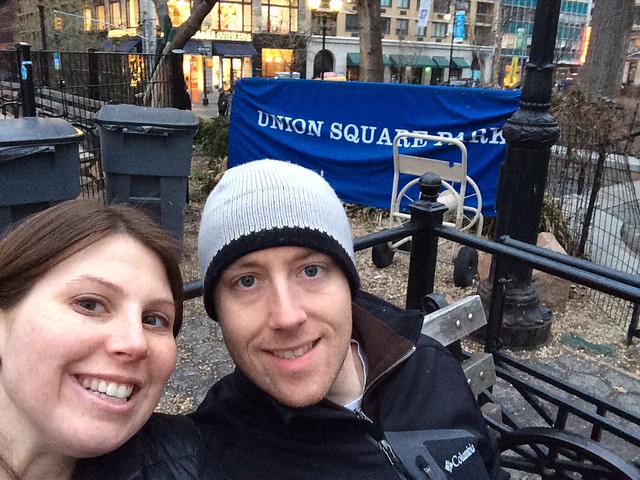 We ate at a pub: Heartland Brewery. Nothing fancy but they did have good mac'n'cheese which Isaac insisted on and really didn't eat (which becomes a common theme this trip, we got to try a variety of mac'n'cheese).

We took the subway train back to times square and called it a night. We got Isaac down and then watched a bit of the Oscars via closed caption before hitting the hay ourselves. 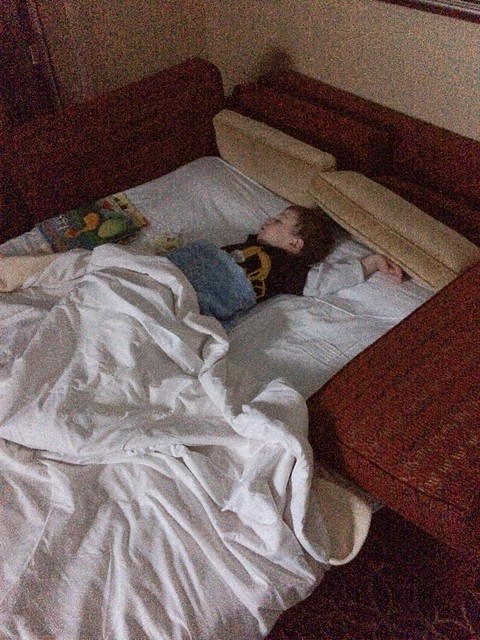