Isaac is 6 weeks old today and boy what a difference!! It's like he changed overnight!!

So Friday night I had some girlfriends over and he was a well behaved boy, awake and alert but not too fussy. He ended up staying up late, wanted to go to sleep as the last few guests left, but I kept him up so I could feed him and we'd all go straight to bed... Well he ended up keeping us up until 1:30am.

Saturday morning he was his usual bright eyed self then took a nap about the same time, around noon/1ish. Then kept sleeping.... we actually woke him about 3:30 to get ready to leave for a church group event that evening. He was awake for a short period then ended up sleeping most of the night which kinda worried us as I didn't want him to be awake during the night, but we let him sleep.

We came home around 8, still sleeping. He actually poked himself in the eye as we were leaving the party and his eye started to get puffy and red when we got home. It seemed a little irritating for him to open it so he kept his eyes closed and slept some more. He slept all through the night (well except to get up and eat of course) which we were happy for. Then this morning he was so wide awake and happy. (and his eye was back to normal, yipee! It was so hard seeing it red and teary last night) He usually has these happy, awake moments throughout the day but they are short, today I noticed these periods were longer and he was more interactive. Staying awake the whole time between a few feedings. And his feedings were going over the 2 hour mark instead of just making it past an hour and a half (which also meant sore boobs for me, but I can live with that, they'll adjust)

Today was also the first Sunday we made it to church with him. He slept in the car there, woke up during worship at 11. I knew he'd be hungry about 11:30 so I fed him in the little feeding corner they have in one of the cry rooms, once he got hungry. Then we sat back out in the Sanctuary the rest of the service and he just looked around the whole time. He was such a good boy!

Also this evening he got his first bottle!! I've been pumping some and have a little supply built up, but thought we should try a bottle so the transition when I go back to work part-time isn't as hard. We had just a few ounces thawed out, ended up being 2. I hadn't labeled the first few bags so I wasn't sure. He had no problem eating those two ounces from Kyle, then he just nursed with me right after since 2 ounces was clearly not going to satisfy him :-)

It is crazy how fast he is changing, but it's so amazing to watch him play more and look at us with smiles and cooing. He is so precious!!

Here's a few pics I caught with my phone today. 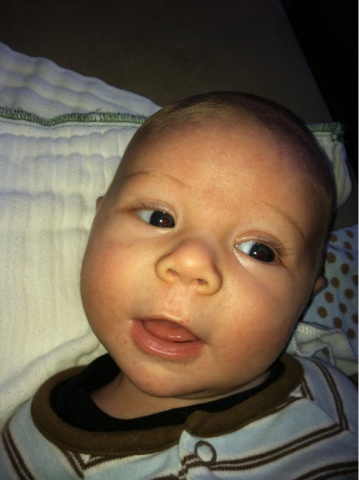 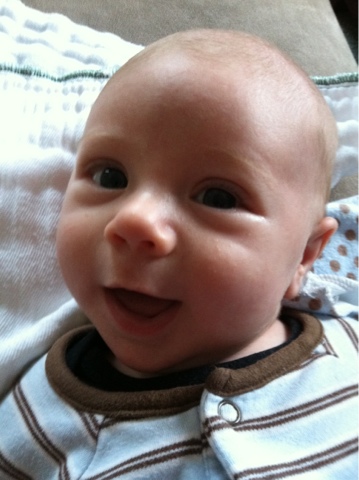 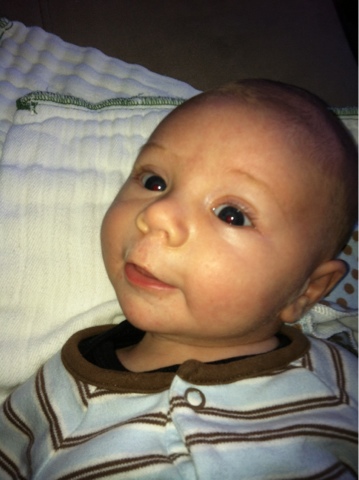