Well I'm ready to share my news with the world... well anyone out there who reads my blog I guess. They are Di/Di twins, which means Dichorionic/Diamniotic. A lot of people ask "fraternal or identical?" Well with Di/Di chances are they are fraternal (aka: dizygotic) but there is still a 14% chance they could be identical (one egg fertilized and split early - aka: monozygotic)... but this is not evident on ultrasound. Once we find out the gender that will give us a better idea, obviously boy/girl is fraternal (meaning two eggs fertilized by two sperm). The other types of twins are Mo/Di and Mo/Mo. Di/Di is the safest way of carrying twins, so there's a positive. They have their own chorionic and amniotic sacs. They have their own placenta so no chances they will suck nutrients from the other (possible with Mo/Di and Mo/Mo) and they are in their own bags so no entanglement in each other's cords (like Mo/Mo). This is a site I found that has a good explanation. And to answer those lingering thoughts, YES this is all natural... we were planning to have one baby, God laughed at us and planned other wise. We were not doing any sort of IVF or that stuff. Just a gift of God probably passed on from my great grandma Mary.... who also had fraternal twins. Turns out fraternal twins are hereditary on the mother's side. My mother's mother's mother.... there's the lineage. Which I still plan to do some more research into how twins are hereditary. And possibly the stars aligning from a few months prior when Kyle and I were talking about having more kids and I want 3 or 4 and he states "Why can't we just have 2?" me: "Two is too easy." him: "why does everything have to be harder? Why do I have to try and 'challenge' myself?". Yup God wants to give us a challenge.... er... blessing.

We got confirmation Wednesday, October 30th at our First Trimester Screening ultrasound. Okay maybe I should start at the beginning.... I had a feeling it was twins from the beginning and since twins had never crossed my mind with Isaac I thought it very weird that it was so forefront in my mind. I had a lot of signs that were making me think more and more that I was having multiplies:

Since actually finding out my intuition was true... a coaster of emotion has gone through our bodies. The obvious first was shock. Pure shock the first day, it was as if we JUST had a baby as I couldn't even remember my name and birthday when asked before getting my blood drawn. Then another breakdown. When I put Isaac to bed Wednesday night I just hugged him and cried and soaking up all the love of a singleton it has to offer. The next evening I wasn't so emotional but instead thinking "If I have so much love for and from this little boy... does that mean with two this love is going to be TWICE as much... hey maybe that's not the worst thing?" So I'm getting there. Everyone is SO EXCITED FOR US! And I will be soon. The few days prior to our ultrasound I was working on convincing myself there was just one because I didn't want to be disappointed if we found out it wasn't twins. Then I was concerned it was a girl! Since my hCG was so high that would be the next possible explanation. If it's not twins it's a girl! Which thinking that actually brought me back to hoping it was twins. It's not that I don't want a girl, I just hear so much how the oldest boy and girl next FIGHT. I didn't want them to fight. Now even if it's two girls, they can just fight with each other :-P So it's kinda crazy for us right now, we have a lot going through our minds. I always wanted at least 3 kids... but separately. My biggest concern now is the delivery and getting these babies out safely and making sure they are healthy.

So in the midst of all this I had to have a little fun since it was Halloween. Hey this is a once in a lifetime (Dear Lord please let this be a once in a lifetime) experience. I pulled out my old skeleton with the baby, but since there was just one on it I needed to do a little editing. Instead of making a new shirt or adding a baby to that shirt. I bought a tank top and just made the ribs and babies and pulled it over my other to utilize the arms. 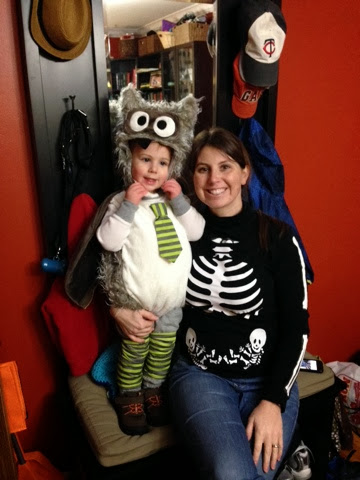 Then Isaac and I also got to carving out our Halloween family Thursday during the day. These 3D photos are kinda creepy but thought I'd share: